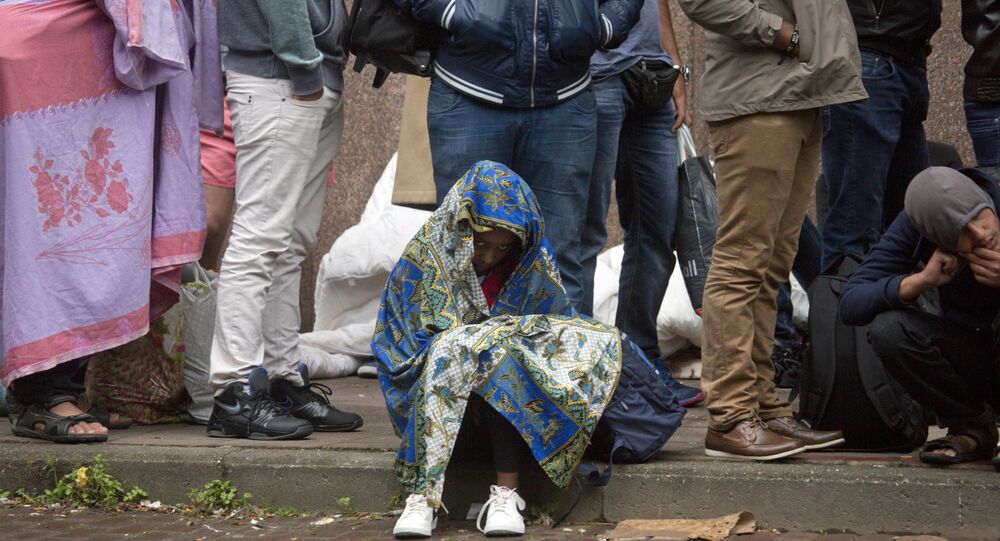 Special Secretary for Migrant Reception: Number of Refugees in EU Needs to Be Balanced

The Greek government has announced a new migration policy at a special briefing.

Sputnik has discussed the issue with Greece's Special Secretary for Reception Manos Logothetis.

According to official statements, the government will try to "unload" the islands of Lesvos, Chios, and Samos and create new centres on five islands with a total capacity of 18,000 people.

The Greek government plans to transport 20,000 migrants from the islands to the mainland by the beginning of 2020 and accommodate them in hotels and existing structures. According to Logothetis, resettling migrants and refugees will take some time.

“I can understand the impatience of islanders who want existing centres to be closed immediately, but this cannot happen overnight. New centres must be created, and in this situation we cannot rush. If something is done in a hurry, the result won’t be good. It takes planning, patience, and time. The Samos centre was designed for 700 people; now it accommodates 7,000 people. The first thing to do is to create an infrastructure suitable for accommodating people. It would be fortunate if the migrant flows ceased, but in any case we must be prepared", he told Sputnik.

One of the most important points of the government's plan is the closing of the current overcrowded Moriah Camp on the island of Lesvos, where most of the complaints by NGOs come from. Instead, a new enclosed centre for 5,000 people will be created. Temporary migrant detention centres on Samos and Chios will also be closed; similar enclosed centres with a capacity of 5,000 people each will be created there.

When Will the New Centres be Ready?

“On Samos, we’re already building the structure, it needs to be expanded. It will be ready by March; I can’t determine the exact date. On Lesvos, the construction of a new centre will start immediately and, considering the specifics of such a large project, I think it will be ready no later than in six months. We still haven’t finished transporting people from the islands to the mainland. Of course, such programmes cannot be implemented overnight", the special secretary for reception said.

Mr Logothetis emphasised that, in general, the government plan will be implemented in two stages, with short-term and long-term aspects reviewed as the situation develops.

"A new border protection mechanism will immediately be applied. The migrant crisis won’t end tomorrow; I’d like that to happen. Then we would have had a different plan and absolutely accurate graphs. However, the plan needs to be reviewed daily. If, for example, Mr Erdogan decides to send another 10,000 people [to Greece], we’ll have to draw up a new plan".

Logothetis added that the original plan was based on numbers from 2017 and 2018. “In 2017, Greece received about 32,000 people; in 2018 we received 45,000. Today, it’s about 65,000 people. Thus, if the numbers have doubled compared to 2017, and the year hasn’t yet ended, then the July plan needs to be reviewed. The situation is changing daily", he said, adding that Europe must recognise that this is not only a Greek problem.

"Greece is geographically located in this region and is facing certain challenges. First of all, the country should be able to share these challenges with Europe, and secondly, there should be the infrastructure to overcome them".

Speaking about the even distribution of migrants in all EU member states, Logothetis noted that, according to the German Minister of Interior, the possibility of redistributing asylum seekers in EU member states would be considered when Germany took over the presidency of the EU Council in a few months.

"We take it very positively and look forward to further developments", he told Sputnik.

How Will Illegal Refugees Return?

According to the plan, the new asylum law provides the basis needed to expedite procedures to either approve asylum applications or return persons who don’t meet the necessary conditions to the country of origin or departure. For this, 500 people will be recruited to work with asylum applications.

Speaking about the return procedure itself, Mr Logothetis noted that “they [migrants] can be returned to the country of departure, that is, to the country from which they had arrived, Turkey".

© AP Photo / Virginia Mayo
Three People Injured in Belgium After Being Attacked By Migrant - Reports
“We believe that in this way Greece will be able to more effectively implement the EU-Turkey Joint Declaration. People can also be sent back to their countries of origin. In this case, a European return system is needed in order to be able to take advantage of the bilateral relations between European states and third countries. We insist on the development of a common return system for the EU, where all member states will be able to negotiate the return of migrants to their countries of origin, since it will be more significant when it’s the EU, not Greece, appeals to Pakistan to accept migrants", he concluded.