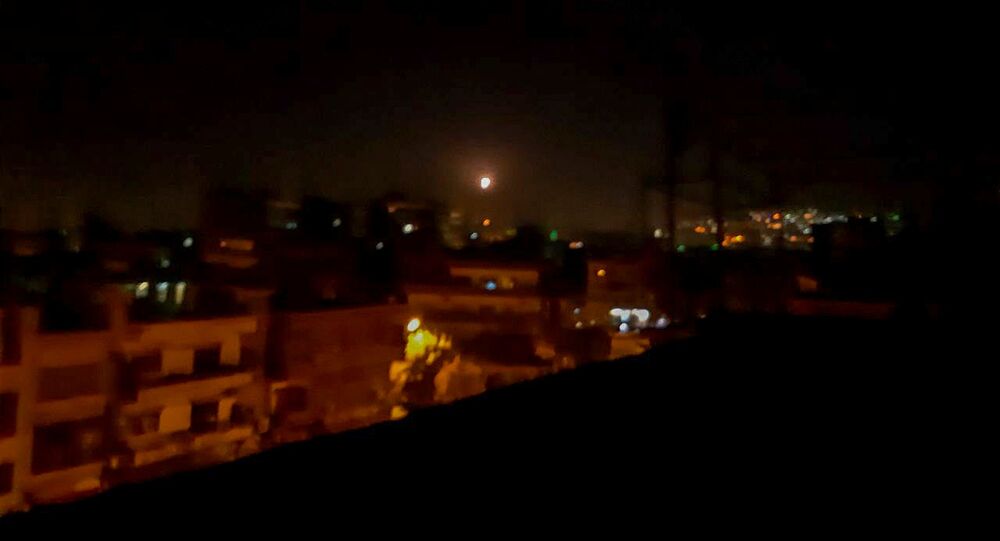 Early Wednesday morning, Israeli jets hit nearly two dozen targets around Damascus ostensibly used by Iranian forces that had fired missiles at Israel. However, Israel’s real aim is to keep the Syrian government off-balance, unable to win or move on from the civil war, according to a former diplomat to Syria.

Six Israeli Air Force (IAF) jets, firing from Lebanese airspace and the air above the occupied Golan Heights, hit several targets around the Syrian capital of Damascus. The Syrian Arab News Agency reported that 11 of the 18 missiles were intercepted by the government’s air defense systems. However, several missiles hit their mark, sparking huge explosions and fires.

The Syrian Observatory for Human Rights reported that 23 people, including 16 non-Syrians, were killed by the airstrikes. Several civilians were among the dead, including a family whose house was hit by a missile, and multiple injuries from shrapnel were also reported.

According to the Jerusalem Post, some of the targets included reconnaissance sites, warehouses and the National Defense Building at the Damascus International Airport, as well as air defense systems.

“It seems that they had targeted the allies of Iran. These are militias, which may come, some of them from Iraq, some from Afghanistan, some have elements of the Iranian Quds, the Jerusalem Force, the Iranian revolutionary group, and these are dotted about Syria, sometimes co-located with Syrian forces. That’s who the targets are. And the primary mission of these Iranian-allied forces is not to fight Israel, but to help the Syrian government to restore control over its territory, sometimes fighting proxies of Israel and Turkey and the United States,” Ford told Sputnik.

“I think all these sites involve Syrian forces which are co-located with Iranians. I don’t think we have seen Israel attacking purely Syrian bases here, because that would be counter to the current rules of engagement, the unspoken rules of engagement,” Ford noted. “Purely Syrian bases, more often than not, have Russian advisers present … The Russians are not prepared to extend their protection and their air cover, their SAM missile defenses, to those” joint Syrian-Iranian sites.

“It’s pretty clear that Israel just wants to keep the Syrian pot simmering. They don’t want a clear winner” in the eight-year-long civil war, Ford told hosts Brian Becker and John Kiriakou. “At the moment, it looks like [Syrian President Bashar] Assad is winning, therefore the Israelis do what they can to tilt the balance back towards the pro-Turkish jihadi forces. But they do not want a settlement; to take out Assad would be to bring closer a final settlement, in a sense, so they’re not going to do that.”

“These attacks can only work to the benefit of Netanyahu, who will have ordered them up … the original incident which made things kick off, the attack on a house in Damascus itself which killed the family of a Palestinian militant, that is what kicked off the present round which just escalated.”

When Israel killed Palestinian Islamic Jihad leader Baha Abu al-Ata in a Gaza airstrike on November 12 and purportedly made an attempt on another leader’s life in a Damascus attack, it set off a wave of violence that has seen missiles and rockets fired against Israel from both the Gaza Strip and Syria, and against both areas by the Israel Defense Forces in return. The IAF claimed the Wednesday strikes were in response to four missiles fired from Syria the previous day that were intercepted by Israeli air defenses. However, the sites hit in Wednesday's strike didn't include those launch sites, the IDF noted.

“But yes, this is Netanyahu trying to make himself macho. This kind of ratcheting up of military pressure he figures can only work to his benefit,” Ford said. “Unfortunately for Netanyahu, he’s standing against a guy who also has a strong military record, so I’m not sure it’s actually very effective.”

“But I would say, without a doubt, that the two developments are related.”

Likewise, Ford said that Washington’s retreat earlier this week from regarding Israeli settlements in the West Bank as illegal was also timed to help Netanyahu, who has promised to annex the Jordan Valley in a future government.

“The United States, under the Trump administration, has made no secret of its wish to see a settlement between the Palestinians and the Israelis which results in a de facto Palestinian, Arab acceptance of the status quo and a regularization of Israel’s de facto annexation of the West Bank and the Golan,” which Israel seized from Syria in 1973, Ford said.

Netanyahu on Israeli Strikes in Syria: 'Whoever is Hurting Us, Will be Hurt'

Journo: Path to Settlement in Syria Must Go Through Damascus not Washington