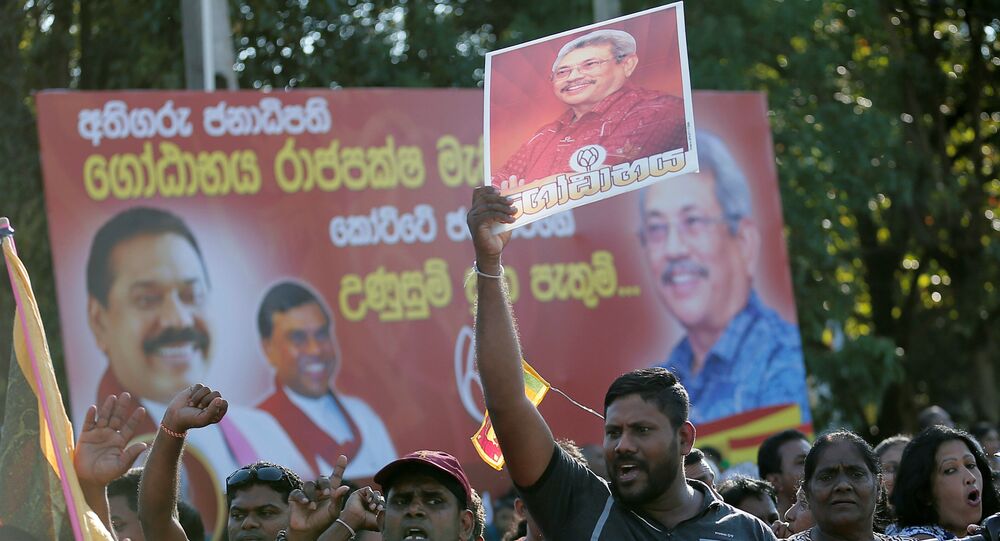 New Delhi (Sputnik): India’s interests will be to encourage Sri Lanka to meet the legitimate aspirations of both the majoritarian Sinhala and Buddhist communities and the minority Tamil community. New Delhi will also be carefully monitoring Colombo’s relations with Beijing going forward, analysts said on Sunday.

With the vote swinging convincingly in favour of Gotabaya Rajapaksa, India is likely to tread carefully with Colombo given the Rajapaksa clan’s past overtures towards China, two former Indian diplomats said.

“Rajapaksa has won primarily because of the majoritarian Sinhala vote bank; especially the votes of the extreme-minded ones in the Sinhala community and the Buddhist clergy. Premadasa, on the other hand, has secured more votes from the 15 percent Tamil and 10 percent Muslim communities in Sri Lanka,” said Ambassador K.P. Fabian, India’s former envoy to Qatar and Italy.

Saturday’s election outcome could have many consequences and Fabian cautioned that the current divide between Sinhalas and Tamils was “not a good sign for a healthy democracy."

Ambassador Fabian said that what must not be ignored was that the Rajapaksa brothers – Mahinda (former president) and Gotabaya – were actively involved in the civil war to neutralise the insurgent Liberation Tigers of Tamil Eelam (LTTE) in northern and eastern Sri Lanka. The international community’s highlighting of the alleged atrocities committed under the “previous” Rajapaksa regime (2005-2015); and the fact that more than 40,000 civilians, mostly Tamil civilians were eliminated during this period.

On how he saw Indo-Sri Lankan ties evolving post elections and in the months to come, Ambassador Fabian said: “India will have to play its cards carefully given Sri Lanka’s closeness to China in the recent past.”

Elaborating on Beijing-Colombo ties, he stated that it is widely acknowledged that China has supported Sri Lanka financially on several key infrastructure projects such as the Mattala Rajapaksa International Airport and the Hambantota seaport. But these loans have come at a price - a very high rate of interest - resulting in some of these projects becoming “white elephants.”

Sri Lanka’s Hambantota Port, which a Chinese state-owned firm acquired via a 99-year lease in 2017 after the Sri Lankan government could not service its loans, has been cited repeatedly as evidence that the Chinese government is practising debt-trap diplomacy.

President Mahinda Rajapaksa actively sought out Chinese-financed infrastructure projects to solidify his political base by transforming his hometown of Hambantota into the country’s second-largest commercial and trade hub.

He used Chinese loans to build large-scale projects such as the Hambantota Port, the Mattala Rajapaksa International Airport and the Colombo International Container Terminal in one of the least developed parts of the island.

The subsequent failure of these projects to generate sufficient income has cost the Sri Lankan government billions of dollars in additional debt obligations.

Ruling out a radical change in Sri Lanka’s relations with India, Fabian, said New Delhi would be watching trends. He said Colombo’s tendency to get close to China again as it did in the past could see geopolitical forces at work to stop it.

Sri Lanka and China first established bilateral trade relations in 1952 by signing the landmark Rubber-Rice Pact. In doing so, Sri Lanka became one of the first non-Communist countries to establish trade relations with mainland China. Since then, China has emerged as one of Sri Lanka’s main trading partners and investors.

During the island country’s civil war from the early 1980s until 2009, Beijing was one of Colombo’s biggest lenders, donating over $1 billion in aid and military equipment.

“Long term, Sri Lanka will have to maintain good relations with its immediate neighbours,” the former Indian diplomat said.

Ambassador G. Parthasarathy, India’s former envoy to Pakistan, Myanmar and Cyprus, said the China factor is deeply ingrained in the Sri Lankan political psyche and there are serious and legitimate concerns about Colombo not repeating “the stupidities” of the past because of it being “deeply indebted” to China.

Saturday’s presidential election results could see India’s relationships changing not only with Sri Lanka, but also with Myanmar, the other neighbouring country scheduled to hold elections in 2020. He said both countries have an “intrusive and less-than-healthy Chinese presence” and “the Chinese take an above-normal interest in the domestic politics of both these countries.”

Colombo has also been keen to have an increased Japanese presence in the island nation. India and Japan have been eyeing joint development of the Trincomalee port in eastern Sri Lanka. Both countries aspire to pursue a free and open Pacific Ocean and Indian Ocean strategy, the former diplomat said.

Internally, Parthasarathy felt that outgoing president Maitripala Sirisena’s performance has been uninspiring and he was wise not to seek re-election.

He felt both Sri Lanka and the Rajapaksa brothers personally would continue to be under international scrutiny for alleged serious human rights violations and if past precedent is anything to go by President-designate Gotabhaya Rajapaksa would continue to receive support from Beijing.

Internally, there are concerns about Rajapaksa’s stance with Sri Lanka’s Tamil community and the close ties that he and his associates have with China, he concluded.