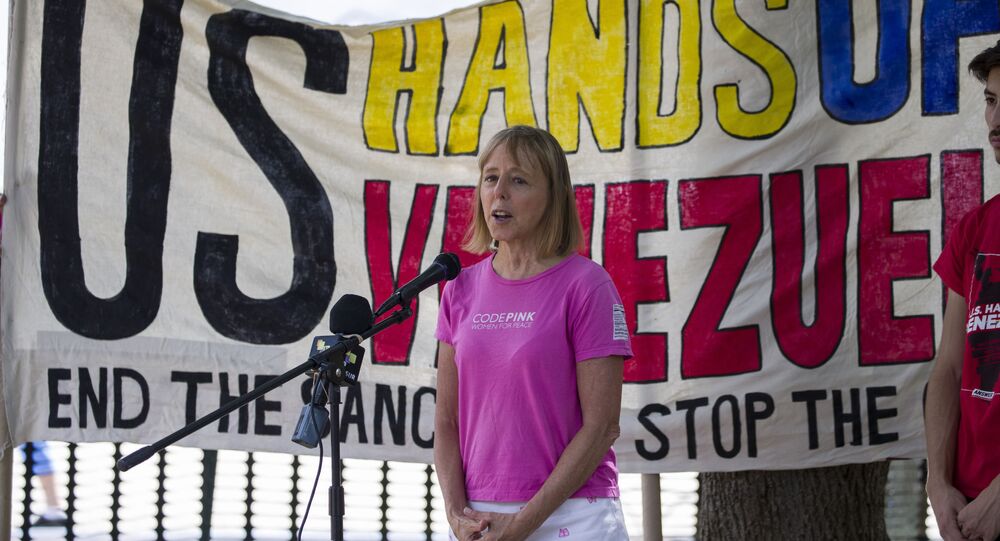 Just weeks after DC police arrested journalist Max Blumenthal for months-old charges relating to a protest against the US coup attempt in Venezuela, they attempted another arrest of Code Pink co-founder Medea Benjamin. She said it’s part of a “dangerous pattern” of intimidating those who speak out against US regime change operations.

Washington, DC police on Wednesday attempted to arrest Benjamin without an arrest warrant on the false allegation that she had assaulted Rep. Debbie Wasserman Schultz (D-FL) at a press conference the lawmaker attended in support of Venezuelan presidential pretender Juan Guaido.

Benjamin joined Radio Sputnik’s Loud & Clear Thursday to discuss how she was actually the one assaulted during the Wednesday presser while peacefully holding up anti-Guaido signs. However, as the peace group co-founder notes, her arrest attempt is not an isolated incident. In fact, it fits in with what Benjamin described as a new pattern by DC police, in which truth tellers and activists are falsely charged with crimes and arrested by police as an intimidation technique to frighten them and silence others.

“That pattern, as you well know, is meant to intimidate people who speak out, and it’s very scary as an individual basis, but when you put the pattern together it’s even more dangerous,” Benjamin told hosts John Kiriakou and Brian Becker.

“I was at the press conference standing next to Debbie Wasserman Schultz when it was a bipartisan press conference. Of course these days it's hard to find anything bipartisan unless its about attacking a poor country overseas. And we were holding our signs, there were six of us. Each one of us had signs that said things like: ‘Hands off Venezuela,’ because it [the press conference] was about creating a new democracy caucus [the Venezuela Democracy Caucus] for Venezuela, and each one of us had a sign ripped out of our hands. One person had a phone ripped out of his hand. They [Guaido’s retinue] were being their usual thuggish selves, and I got pulled backward, choked, attacked, pushed to the ground and in the process got myself out of there, got home, and that’s when there was this all out bulletin for me, like I was some terrorist,” Benjamin described.

​The activist told Sputnik that when the police arrived at her Washington, DC, home to arrest her, they “came screeching up the street, going the wrong way on a one-way street, surrounding my house. Then came the motorcycles. And of course my neighbors were very worried about what the hell was happening.”

“As you said, they didn’t have a warrant,” Benjamin told Sputnik. “They stayed for quite a while discussing what to do with me, as I didn’t agree to get arrested. Then it turns out they said the detectives were looking at the footage and they said I was free to go.”

“I don’t know. I’m very glad I wasn't arrested, but I don’t know if that’s the end of it, because as we know in the case of [American journalist] Max [Blumenthal], they came back five months later with a false assault charge. So, we don’t know,” Benjamin explained.

On October 26, Blumenthal, who is also the editor of the news site The Grayzone, was arrested on false assault charges claiming that he assaulted a Venezuelan opposition member during a siege of the Venezuelan embassy in DC in April and May.

“This charge is a 100 percent false, fabricated, bogus, untrue, and malicious lie,” Blumenthal said, journalist Ben Norton reported for the investigative journalism outlet The Grayzone, which Blumenthal founded. “It is clearly part of a campaign of political persecution designed to silence me and the The Grayzone for our factual journalism exposing the deceptions, corruption and violence of the far-right Venezuelan opposition.”

In recent months, Washington has increased its draconian economic sanctions on Venezuela while freezing some of the country's assets as part of its scheme to oust President Nicolas Maduro and place opposition leader Guaido as his successor. Maduro has accused Guaido and Washington of collaborating to orchestrate a coup to take control of Venezuela's resources - with more than a little evidence surfacing to support the allegation.

According to Becker, this pattern of intimidating truth-tellers, especially those speaking out against US intervention and sanctions in Venezuela, is a “tactic of Juan Guaido’s people working with different police agencies.” He also noted that people who were protesting against the coup attempt in Venezuela and the corresponding attempted seizure of the Venezuelan embassy by the pro-Guaido opposition in Washington in April were “victims of repeated assaults - physical and verbal - by Guaido supporters.” Police officers “did nothing or just smiled and looked away,” Becker added, also describing how the violent tactics were executed against peaceful protesters with the “complicity of different police agencies.”

​“When we had footage of being attacked and tried to show it to the police, either the DC police or the Secret Service, they refused to even look at it, and they refused to take down a complaint for us about assault,” Benjamin told Sputnik. “Yes, this is a very very dangerous pattern that we have been seeing, and we want to know why it is that the police - the Metropolitan Police, the Capitol Police and the Secret Service - are working hand in glove with the foreign group: [Guaido’s ambassador in Washington] Carlos Vecchio and his supporters.”

“We should recognize that this parallel government that the US has set up in Venezuela is being paid for by our tax dollars: not only their salaries, all their expenses, whatever business they are up to, we pay for that. When we want to speak out for non-intervention, we are the ones that get attacked,” Benjamin explained.

“We can’t let into their intimidation, and I must say that all of the support I have been getting from folks yesterday is very heartening, to know that we are not alone and to know that people recognize that what the government is doing to one of us, they could do easily to one of them … unfortunately this is the way that our criminal injustice system works,” she said.

“We do need to rise above the intimidation and now with the coup in Bolivia, with the threats against Venezuela, the increased sanctions on Cuba, the people in Chile rising up - there’s a lot of good and bad things happening in Latin America, and we know that our government is always on the wrong side. And that’s why, we the people, have to be on the right side,” Benjamin added.