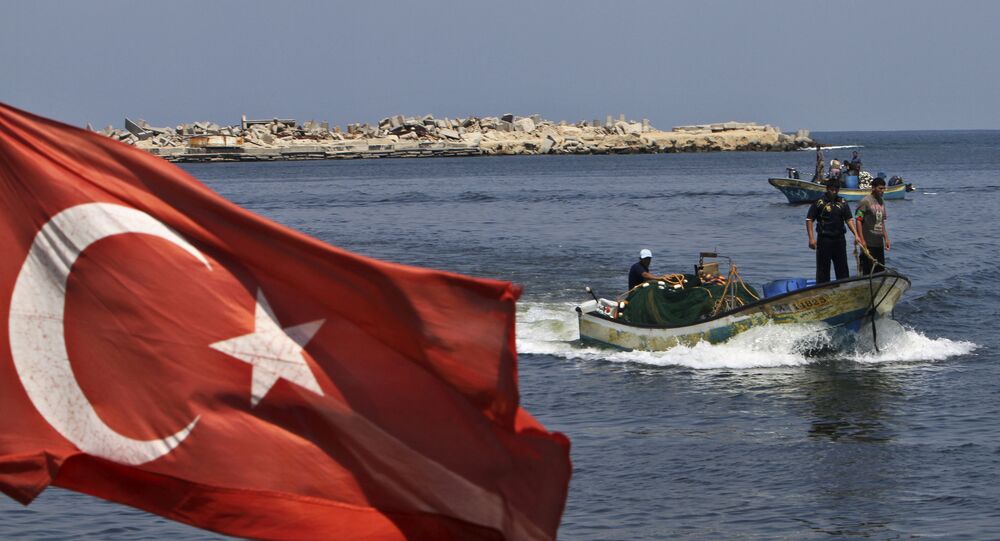 Israel's relations with Turkey have been bumpy ever since President Erdogan took office, argues a former Israeli diplomat. But they have every chance to change course if the current leaders leave the political scene.

US President Donald Trump met his Turkish counterpart Recep Tayyip Erdogan on Wednesday, calling himself "a big fan of Turkey".

The meeting comes as relations between the two countries begin to show signs of thawing, but Alon Liel, a former director-general of Israel's ministry of foreign affairs, says the US is far from being the only country Turkey has rocky relations with.

Liel believes that over the years Erdogan has managed to ruin relations with Greece, Cyprus and Egypt.

"Ties with Israel have also suffered a blow", he added over the phone, pinning the blame not only on Erdogan but also on the government in Israel.

However, they have not always been strained. Turkey was the first Muslim country to recognize Israel in 1949. Since then the two countries have enjoyed relatively warm relations, as both were western-oriented and secular in a region dominated by Arab nationalism.

© REUTERS / LUCAS JACKSON
Netanyahu Claims Blood is on Turkey’s Hands After Erdogan Compares Israel to Nazis
Relations continued to be warm and reached their peak in the 90's of the previous century and when Erdogan came to power in 2003 the honeymoon was still blossoming. In 2005, Erdogan visited Israel, condemned anti-Semitism and wanted to play a pivotal part in mediating between Israel and its neighbours, including the Palestinians and the Syrians.

But the situation deteriorated following Israel's Operation Cast Lead of 2008. In its attempt to curb indiscriminate rocket fire from the Gaza Strip towards its southern towns, Israel killed 1,400 Palestinians and injured more than 5,000.

Then came the Mavi Marmara incident of 2010, when Israeli forces took control of six civilian vessels packed with activists from Turkey - bound for Gaza - who wanted to break Israel's blockade of the enclave. After opening fire, Israel killed nine Turkish activists.

Relations have not improved since then. First of all, believes the former diplomat, because of the religious factor. Erdogan, a deep believer, considers himself a defender of Muslims around the globe, including the Palestinians and their rights in Jerusalem. He also sympathizes with Hamas, considered a terrorist organization in Israel.

"The Islamic group sees Erdogan as their spiritual leader. Back in 2006 he was the one to encourage them to go into politics, convincing them to scrap the purely military path", he added, referring to Hamas' victory in the 2006 elections and the subsequent seizure of power in the enclave.

Another point of friction revolves around the issue of Jerusalem. Israel views with suspicion Turkey's activity in East Jerusalem, where the Turkish Cooperation and Coordination Agency invests money in various projects, including the building of schools and houses, according to Israeli media reports. This even prompted Israel's foreign minister Israel Katz to announce a series of measures that would "stop Turkey's incitement and subversion in East Jerusalem", the report stated.

But Liel believes one of the main obstacles lies in the fact that there is zero chemistry between President Erdogan and Prime Minister Benjamin Netanyahu.

"Erdogan has been in power for 16 years, whereas Netanyahu has been around for more than a decade. Not once did they visit each other. Nor did they exchange high-profile delegations. All they did at a maximum was exchange phone calls at times of major crises", he said.

This led to a situation, the expert believes, where despite the fact that the countries have diplomatic relations, ties are almost non-existent.

"No cultural projects have been lifted and there is no cooperation on the political or intelligence levels. Israeli diplomats in Turkey and their counterparts in Israel sit and do nothing simply because these are the orders they get", he complained.

But the expert remains optimistic, saying the situation can be mended, especially given the fact some 53 percent of Israelis support the idea of improving relations with Turkey, according to the recent poll conducted by Mitvim, an Israeli think-tank that analyzes Israel's foreign policy and relations with neighbours.

But for relations to improve, Liel argues, one of two things must happen first: a breakthrough in Israel's talks with the Palestinians, or a change of governments in both countries.

"Erdogan promised he will resign in 2023, and given the political situation in Israel I don't think that Netanyahu will stick around for another four years. So we will need to wait four years to see a change", he concluded.