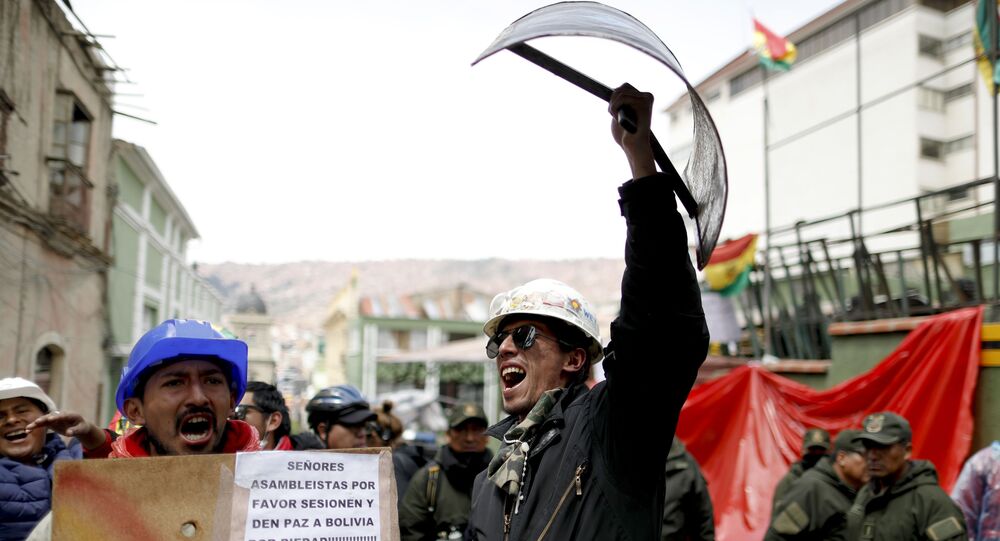 In orchestrating the overthrow of Evo Morales’ indigenous-led Bolivian government, the US deployed a playbook used time and again across Latin America, an anti-war activist told Sputnik. Washington taps into its strong links with the military and police whenever states place their own poor before profits of the imperial core.

On Wednesday, three days after Morales stepped down from the Bolivian presidency and fled the country, Senate opposition leader Jeanine Añez declared herself the country’s interim president amid the body’s failure to nominate a replacement for Morales. Senators from Morales’ Movement for Socialism (MAS) party, who form a strong majority in the Senate, stayed away from the legislature amid threats from the right wing. However, when they attempted to return to their posts on Thursday to block Añez’s move, Bolivian police prevented them from entering the Senate.

Meanwhile, violence has continued to escalate, with attacks on indigenous people increasing daily as well as deaths. Huge numbers of indigenous people have been converging on highland cities like El Alto, La Paz and Cochamamba in defense of the government, the first led by the continent’s indigenous people since European conquest 500 years ago, while the Bolivian military mobilizes to smash their movement.

“There’s constant attempts by the US to undermine and overthrow any government in Latin America that dares to put the needs of its people above the greed of foreign corporations, and that’s clearly what’s happening here. The US has been actively intervening and overthrowing governments in Latin America for 200 years,” Gerry Condon, a Vietnam-era veteran, war resistor and longtime peace advocate who presently serves as the national president of Veterans for Peace, told Radio Sputnik’s Loud and Clear Thursday. He noted that US meddling in Bolivia was “election interference on steroids.”

“This is clearly a pre-planned violent uprising,” he said, adding that when “these uprisings against governments that are not in the favor of US imperialism take place, they’re often described as non-violent uprisings, and any attempts to meet those violent protests are then called violent oppression/repression by the government.”

“So what did they do? They set up barricades. They actually had all kinds of weapons, including homemade mortars but also AK-47s and snipers. They were actually targeting the police; they killed 22 police. Then the US media and the international media, corporate media, said, ‘Well we have nonviolent protesters being met by a repressive Sandinista government.’ Well, the Sandinistas, actually, were trying to meet this thing, trying to keep it from getting out of hand. They actually asked the police to go back into the barracks; they never called the military out. They tried to de-escalate the violence, but the US media and the corporate media was happy to portray this as righteous nonviolent protests against a corrupt dictatorship.”

“There is a playbook, and the generals that were involved here were trained at the School of the Americas,” Condon told hosts Brian Becker and John Kiriakou. “These guys were trained and cultivated by the US, and the US is always cultivating the military. I mean, one of the reasons that the same playbook so far has not worked in Nicaragua or Venezuela is that the military has stayed loyal to the government. In Bolivia that wasn’t the case.”

Journalist and historian Jeb Sprague reported for The Grayzone on Wednesday that six of the leading coup plotters are graduates of the Western Hemisphere Institute for Security Cooperation in Fort Benning, Georgia, better known by its previous name, the US School of the Americas. Commanding General of the Bolivian Police Vladimir Yuri Calderón Mariscal, who suddenly turned and led the police in revolt against the government on November 9, and many of the country’s other police leaders were also closely networked with US intelligence and the FBI, with whom they had trained and grown close, especially via military attache posts in Washington, DC.

-6 SOA alumni
-Police leader behind coup served as President of DC Attaché group & worked closely with FBI.
-Leader of Army somehow was flipped.Previously was Mil.Attaché at embassy in DC.

​Damning evidence incriminating the coup plotters came in the form of leaked audio footage of their coordination obtained by Bolivian news website La Época. The golpistas also mention strong support for the coup by US Senators Ted Cruz (R-TX), Bob Menéndez (D-NJ) and Marco Rubio (R-FL), the latter of whom is said to have US President Donald Trump’s ear on Latin American policy and all three of whom have been cheerleaders for US sanctions and attacks on countries from Venezuela to Cuba, El Salvador and Nicaragua, among others.

“The US is constantly cultivating those contacts in the military, so you need a military that is also on the side of the people and not easily corrupted or in the hands of the oligarchy or more loyal to the US government than to their own government,” Condon told Sputnik.

However, the anti-war activist cautioned that despite Añez assuming the presidency, Morales fleeing the country and central MAS government leaders all stepping down, the far-right’s reign of terror would continue.

“They’re not satisfied with just overthrowing the government; they’re going to want to totally destroy the progressive socialist movement and the indigenous-led movements. So there’s a lot of people under attack right now throughout Bolivia, and they need our support - badly. So I think it’s really important that people here in the United States who understand what’s going on stand up and speak out and act in solidarity with the indigenous-led social movements that are under severe, fascist, racist attack right now in Bolivia.”

“You lift people out of poverty, and you’re under attack by imperialism … The struggle is constant in Latin America,” Condon said, again noting similarities between Bolivia, Nicaragua and Venezuela. “US imperialism is constantly at work undermining social progress in Latin America and any government that stands for the people over the corporations.”