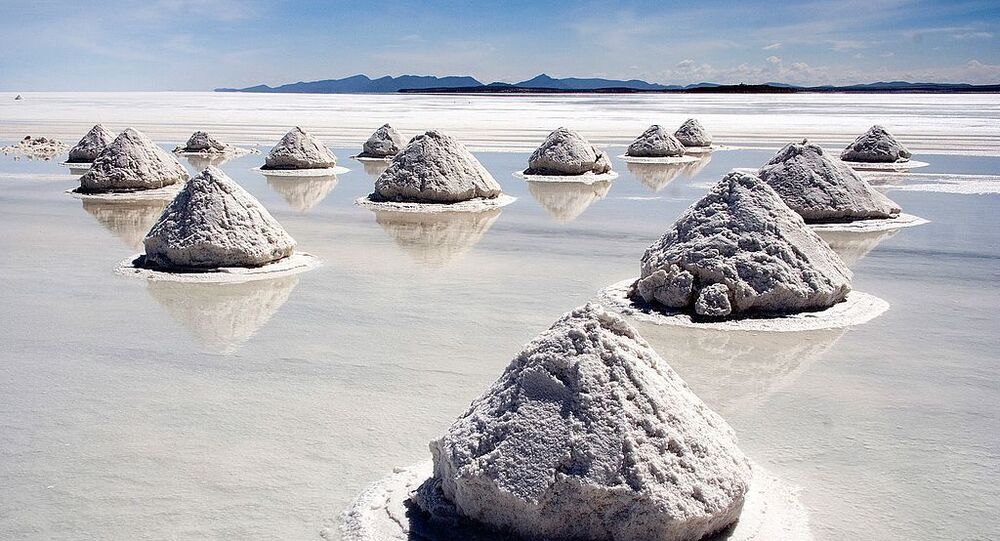 Evo Morales was ousted as Bolivia’s president just days after cancelling a lucrative lithium mining contract with a German firm. Morales’ cautious path, which put Bolivians before transnational firms, stood in the way of incredible profits from an electric car battery market that promises to explode.

Sunday, the day Morales resigned amid a right-wing military coup d’etat, a spokesperson for German mining firm ACI Systems Alemania (ACISA) told German publication Deutsche Welle the company was "confident that our lithium project will be resumed after a phase of political calmness and clarification."

On November 4, La Paz cancelled a joint venture project with ACISA to mine lithium in the vast salt flats of the Altiplano. The government press agency Agencia Boliviana de Informacion (ABI) noted at the time that the Potosinist Civic Committee (Comcipo) regional government had “requested its abrogation” in a massive strike on October 7, but offered no other explanation for the move. The deal would have seen a $1.3 billion investment in mining lithium in the world’s largest salt flats, Salar de Uyuni near Potosí, as well as the construction of a factory for electric vehicle batteries and a lithium hydroxide plant.

The striking residents wanted a more substantial cut of the profits in the ACISA operation, demanding an increase from 3% to 11% royalties, Spanish news agency EFE reported at the time.

Shortly after the left-wing Morales was elected to office in 2006, he set about nationalizing several of the most powerful mining operations in the country, including Glencore, Jindal Steel & Power, Anglo-Argentine Pan American Energy, and South American Silver. The firms extracted a variety of metals from the Bolivian soil, including iron, indium, tin, zinc and silver, as well as natural gas. However, foreign partnerships remained, as the country owns little capital itself, especially for exploring new projects, such as lithium.

Historian Vijay Prashad described in a Wednesday article for Common Dreams that La Paz faced extensive pushback, including legal arbitration, from the home countries of these transnational firms, which are based in Canada, Switzerland and India. Bolivia was forced to pay out hundreds of millions of dollars in compensation.

However, the move paid off, as the Financial Times noted in 2014 that “since coming to power [Morales] has tripled the size of the economy while ramping up record foreign reserves.”

Lithium, however, remained largely untapped. The challenge for La Paz has been not just to mine lithium and sell it abroad, but to develop a homegrown industry that would process the metal for sale in value-added form, as in the case of batteries, TeleSur reported.

Former Vice President Alvaro García Linera, who has called lithium the “fuel that will feed the world,” described in September the government’s plans for “lithium industrialization,” noting that the Altiplano city of Oruro “won’t just produce mineral and power but also lithium, lithium hydroxide, cathodes and lithium batteries.”

The key here is that deal with the Chinese would be a joint partnership, in which Bolivia's state-owned lithium company YLB would have retained majority ownership. Not privatization and selling off Bolivia's natural resources to Western mining giants. pic.twitter.com/pKU5tUVlM6

However, ACISA wasn’t the only partner for developing Bolivia’s lithium mining industry. A February deal signed between Chinese firm Xinjiang TBEA Group Co Ltd and Bolivia state lithium company Yacimientos de Litio Bolivianos (YLB) would have seen La Paz with a 51% stake in the $2.3 billion venture -  the same arrangement reached with ACISA three months prior - to mine lithium from the southern Coipasa and Pastos Grandes salt flats.

The Chinese partnership is especially important, since Beijing has begun an ambitious initiative to shift the country’s roads toward being electric-powered by the end of the next decade, although a Chinese think tank study in May said that 2040 might be a more realistic goal. China is already the world’s largest electric car market, selling more than 1 million cars last year.

people need to understand the point about lithium and Bolivia. electric cars have increased lithium demand 10% each year since 2015 - Tesla Model S uses a battery pack with the amount of lithium equivalent to 10,000 cell phones. Bolivia has 1/6th of the world’s lithium reserves.

For nearly 500 years, the region’s economy has been geared toward resource extraction. The Spanish empire’s colonial mint was based in Potosí, which sits at the base of a mountain nicknamed “Cerro Rico” (rich mountain) due to its incredible richness of silver, the basis of European currencies at the time of the Spanish conquest of the Incan Empire in the 16th century.

Cerro Rico, it was said, was the “mountain that ate men.” Over the course of four centuries, an estimated eight million indigenous people perished extracting silver from the mountain, according to Eduardo Galeano’s book “Open Veins of Latin America.” By 1996, Potosí had produced one-twenty-fifth of all silver ever mined by humans, but in its prime in the second half of the 16th century, it might have produced 60% of the world’s silver.

Bolivia claims to have some 70% of the world’s lithium reserves, mostly in Salar de Uyuni, which might top 21 million tons, according to a recent government estimate; Salar de Uyuni might have 9 million tons, or one quarter of world reserves, by itself, according to the US Geological Survey. The World Bank has predicted global demand for lithium will skyrocket in the coming years, doubling by 2025 reaching more than 1,000% of present demand by 2050.

An Enemy of Environmentalists?

Journalist Wyatt Reed showed in an August story for The Grayzone how the underpinnings of the disinformation war against Morales were laid months before his removal from power. That propaganda ironically portrayed Morales as an enemy of environmentalism, presenting false stories about Bolivia doing nothing to combat wildfires even as images showed Morales himself on the front lines, when the electric cars key to reducing greenhouse gas emissions are going to be produced by Bolivian lithium Morales set in motion.

Together, that means massive economic opportunity for anyone who can pull the metal from the high altitude salt flats. Morales, an indigenous Aymara man, tried to secure some of that wealth for the people who mined it from one of the region’s poorest countries. It might have cost him his presidency.