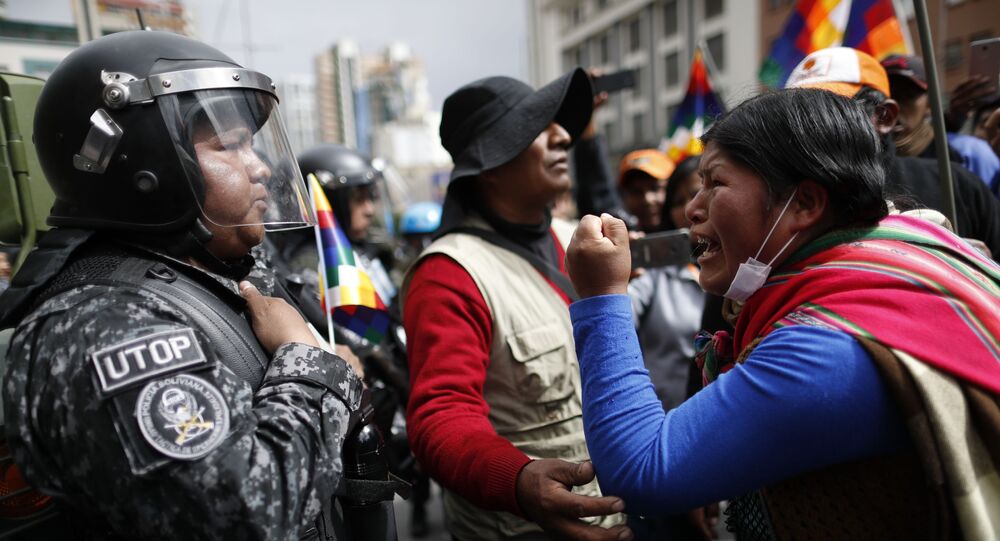 Former Bolivian President Evo Morales resigned Sunday after the country’s armed forces, with the support of right-wing opposition leaders, forced him from office in what is widely derided as a coup over what they claimed were irregularities in the October 20 presidential election.

“Nobody is using the word ‘coup.’ Evo Morales cut back poverty by 40%, cut extreme poverty by 60%. He’s done nothing but good for the Bolivian people, and there’s no evidence that this election was a fraud,” Flores said.

“We are talking about irregularities according to an OAS [Organization of American States] report. The first OAS statement that was made back on October 21, they claimed that there was an inexplicable jump in the … trend. So, Morales, in the first vote report that came out the night of the elections, he was up by 7.8 points. In the second vote report, which was 24 hours later - always by design, but the media portrays it as an explicable delay - the second vote report showed him up by 10 points. The difference here is that the rural vote came in … It’s no surprise at all that the vote swung Evo’s way in a huge majority,” Flores explained, noting that rural and indigenous communities greatly support Morales, an Aymara indigenous person himself, and have “no reason to vote for the opposition.”

Shortly after Morales’ resignation, he fled to Mexico, where he was granted political asylum due to concerns for his safety. Several Bolivian indigenous people who support Morales have staged rallies in support of him, and Morales has accused opposition leaders Carlos Mesa and Luis Fernando Camacho of orchestrating a coup against his leadership.

“We’ve seen Bolivian social movements mobilizing around the country in the last few days,” Flores explained, describing the protests as a “gun battle between Morales supporters and the police, the police being joined by far-right-wing extremists.”

In a statement Monday, US President Donald Trump called Morales’ resignation a "significant moment for democracy in the Western Hemisphere."

It’s unsurprising that the US applauded Morales’ resignation, Flores pointed out.

“Part of it is just general anti-socialist sentiment. Then the other part is that Bolivia has played a role, along with Venezuela, in trying to break the geopolitical grip on power, the hegemonic grip of the US in South America. If they [the US] can take Bolivia out, that is one fewer country that is standing up to US policy in the region,” Flores noted.

“One of the reasons this coup has had success so far is that … there’s no regional body that’s supporting Bolivian sovereignty and Bolivia’s democracy, basically. The only regional body we have is the OAS, which has played an important role in overthrowing Evo Morales,” Flores explained.

Earlier this year, the United States orchestrated the removal from the OAS of Venezuela, whose president, Nicolas Maduro, is a close ally of Morales’; however, the Caracas envoys decided to leave before the deadline for their ouster, Sputnik previously reported.

According to Flores, the coup attempt in Venezuela spurred by Juan Guiado beginning in January failed because of Venezuela’s so-called civil-military union, which does not exist in Bolivia.

Morales, by comparison, cut his political teeth with the trade unions of coca growers in northern Bolivia.

“The only way for social movements to remain in power,” according to Flores, is for countries to establish civil-military unions.

“If Morales comes back to power,” which is possible, Flores noted, “that’s one of the things we’re going to see. We're going to see structural reforms within the military, within the police, involving the Bolivian people, the citizens, more in these institutions,” as happened in Venezuela following the failed 2002 military ouster of Chavez.

The mainstream media has paid scant regard to the violence being perpetrated against Bolivian officials by the opposition, Flores said.

“We saw a mayor in the town of Vinto, an indigenous mayor, a socialist mayor, who was taken out of her house by protesters who proceeded to beat her up. They forcibly cut off her hair, they doused her with red paint, and they forced her to march down the streets with these protesters before setting her office on fire. The protesters on Saturday, I believe, they took over two TV stations and a radio station in La Paz, public stations, and the director of the radio station was then tied to a tree for several hours as protesters humiliated him … The media is misreporting what is going on in Bolivia,” Flores explained.

Bolivia’s Second Vice Speaker of the Senate Jeanine Añez announced Tuesday that she was assuming for herself the title of interim president of Bolivia, following the Senate’s inability to reach quorum on her appointment due to the absence of numerous lawmakers from Morales’ party, the Movement for Socialism. She previously estimated that a new election would take place by January 22.

Number of Killed During Riots in Bolivia Rises to 7 - Reports

Bolivia’s Evo Morales Says Leaving for Mexico, But Will Return ‘With More Strength’