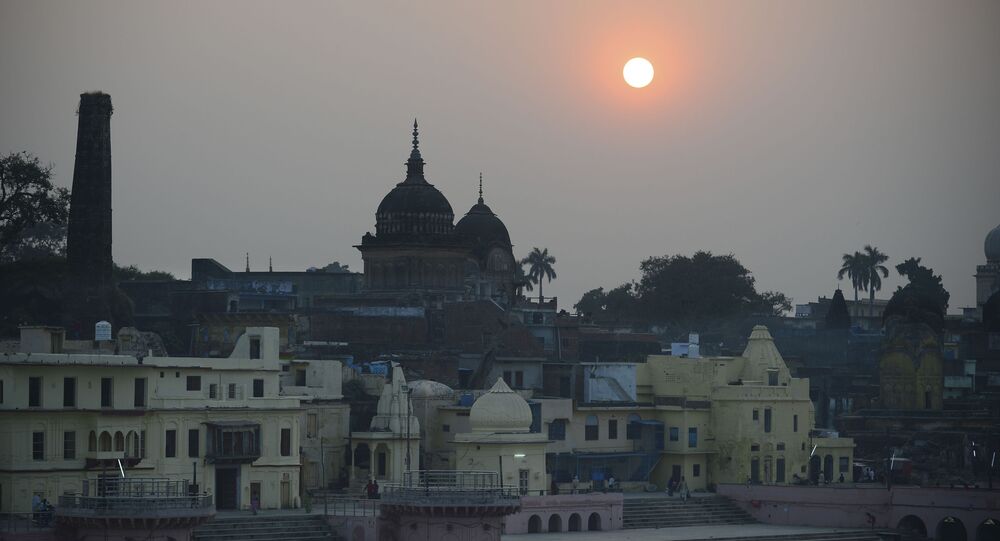 New Delhi (Sputnik): Pronouncing a verdict in India’s decades-old religious land dispute – a case over the control of a religious site contested by Hindus and Muslims – the country’s top court handed over the site to Hindus for the construction of a temple and 5-acre alternative site to Muslims at any prominent place in Ayodhya.

Now that the Supreme Court of India has put an end to a nearly seven-decade-old issue, a question remains: what will Prime Minister Narendra Modi's Bharatiya Janata Party (BJP), a right-wing party, do to keep its core voters motivated?

Nilanjan Mukopadhyay, a senior journalist and author of "Narendra Modi: The Man, the Times" said “the BJP will continue to prioritise Hindu nationalist narrative and there will never be an end to the agenda of Hindu nationalism".

Mukopadhyay quoted what 91-year-old veteran Lal Krishan Advani said after the Babri Mosque’s demolition: “The Ayodhya agitation is not just about the construction of a Ram temple, but to propagate the ideology of cultural nationalism".

India’s ruling party, the Bharatiya Janata Party (BJP), and the issue of the Ram temple have over the years, drawn strength from each other and thrived. This was the issue that gave the BJP recognition in 1990s when the party led a nationwide campaign to build a temple in the place of a mosque in Ayodhya, located in the Indian state of Uttar Pradesh.

The party’s nationalist campaign catapulted its tally from two to 85 seats in the country’s Parliament in 1989. Advani even led the a “Rath Yatra” (a chariot procession) of Karsevaks (volunteers) to congregate at the contentious site but it ultimately led to the demolition of the 16th Century Babri Mosque.

He long campaigned to mobilise Hindus to build a “grand” Ram temple at the disputed site.

Asked about what “new elements” the BJP could focus on to mobilise its voters, the author of Prime Minister Modi’s biography said “the issue of having a small family”.

“Although it’s a laudable issue they (BJP) have taken up, there are apprehensions that it is motivated by a perception that it’s the Muslims who have higher birth rate – which is portrayed as a conspiratorial agenda on the part of the community".

He added the “government is already focusing on a National Register of Citizens; we can expect a ban on cow slaughter and greater restrictions on meat eating; there can be pressure on sartorial choices that you cannot wear a burqa (veil) in public places".

“We do not know where this is all going to stop. We have got up on a tiger, now the tiger will have to decide for how long it wants to run and in which direction", he added.

The Ayodhya issue has been stoked by Hindu hardliners in India, including millions of supporters of Indian Prime Minister Narendra Modi’s Bharatiya Janata Party. Right-wing Hindu groups claimed that Lord Ram was born at the site where the Babri Mosque existed, alleging that the first Mughal emperor, Babur, built the mosque by razing a temple that earlier existed.

The issue took a serious turn in 1949 when a group of Hindu activists placed idols of Lord Ram inside the mosque.

The demolition of the mosque on 6 December 1992 by “Karsevaks” sparked communal riots across the country leaving nearly 2,000 people dead.

After the Supreme Court in its verdict on 9 November directed the government of India to establish a trust within three months to oversee the construction of a temple, right-wing Hindu groups rejoiced at the decision.

“We will plan our further actions based on how the construction of Ram temple unfolds. All the devotees of Lord Ram will collectively strive for the building of the glorious Ram temple”, Vinay Bansal, spokesperson for Vishwa Hindu Parishad, a leading Hindu organisation that takes up issues of religious and national importance, said.

“Some people are trying to create differences on the issue of Kashi-Mathura (another issue of religious significance). For now, the Ram temple is our only motto", he added.

Located in the same state of Uttar Pradesh, Kashi and Mathura are two towns of immense religious importance for millions of Hindus all over the world.

Speaking about whether the hardliners will now take up the Kashi-Mathura issue, Mukopadhyay said: “Nobody said no or never".

Ayodhya, largely known as a holy city, has hundreds of temples attracting many pilgrims every year.

The five-judge Constitution Bench of the Indian Supreme Court on Saturday nullified a 2010 Allahabad High Court verdict, which had asked for three-way division of the disputed Ayodhya site, spread over 2.77 acres, amid the three stakeholders in the case – Nirmohi Akhara, a sect of Hindu monks; the deity Ram Lalla Virajman, a Hindu group demanding construction of a temple at the disputed site; and the Uttar Pradesh Sunni Central Waqf Board, a Muslim body demanding the construction of a mosque.