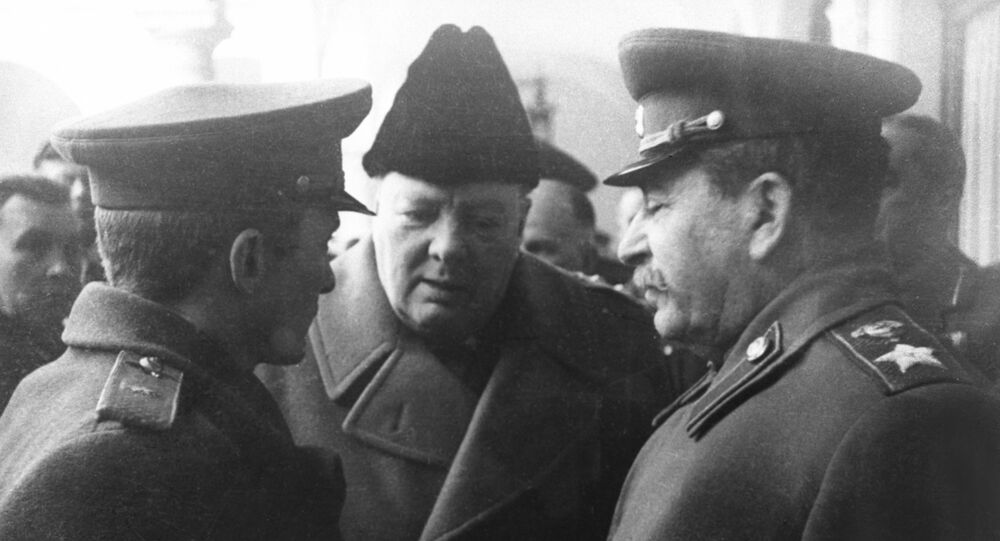 74 years since the end of World War II, the war and its aftermath continue to reverberate in popular memory. Unfortunately, the Cold War led many to forget the unlikely wartime alliance between the USSR and the Western Allies. Dr. Geoffrey Roberts, a leading British scholar of Soviet history, explains why it’s important to keep its memory alive.

The world’s continued remembrance of the events of the Second World War was demonstrated again this week, with Russia marking another anniversary of the legendary November 7, 1941 parade on Moscow’s Red Square, while the UK, the US, Canada and other Western allies in World War II solemnly marked Remembrance Day (known as Veterans Day in the US), dedicated to the two World Wars and to later conflicts.

Geoffrey Roberts, an emeritus professor of history at University College Cork, Ireland, and leading Western author on Soviet diplomatic and military history, has been writing prolific books about the USSR’s role in the Second World War since the late 1980s, covering the conflict itself and the roles played by key personalities including Soviet leader Joseph Stalin, his foreign minister Vyacheslav Molotov, and General Georgy Zhukov, one of the war’s most celebrated commanders.

'Most Successful Alliance in History'

‘Most Successful Alliance in History’

In an interview, Dr. Roberts talked about his new book, explaining the importance of the wartime alliance between the Soviet Union and the Western Allies, and its lessons for today.

“As Stalin said, the wartime coalition of Britain, the Soviet Union and the United States was the most successful alliance in history,” the professor explained. “Deep and far-reaching military, political and economic cooperation was required to beat Hitler and the Nazis. Profound political and ideological differences between the three allies complicated but did not prevent such co-operation and each state made major contributions to the common victory over Nazi Germany.”

“Of course, the main contributor to victory was the USSR, but Britain, the US and other allied states provided much-needed material aid to the Soviet Union that speeded the Red Army’s victorious advance to Berlin. So successful was the anti-Hitler coalition that at end of the war the three countries declared their commitment to a peacetime grand alliance that would guarantee peace and  security for all states,” Roberts noted.

In their book, Roberts, Folly and Rzheshevsky discovered that despite their vast ideological disagreements, Stalin and Churchill were able to form a close and intimate working relationship.

Asked how this was possible, Dr. Roberts explained that it was important to remember “that before the Second World War Churchill opposed appeasement of Nazi German and advocated an Anglo-French-Soviet alliance to stop Hitler – a stance that Stalin appreciated.”

“Stalin was also impressed by the alacrity with which Churchill declared Britain’s support for the Soviet Union when the Germans invaded in June 1941 – a significant gesture given Stalin’s prior collaboration with Hitler following the signature of the Nazi-Soviet pact in August 1939,” he noted. “On his part, Churchill greatly admired the heroic struggle of the Soviet army and people in the face of an evil German invasion. He saw Stalin as a fellow warrior, as a comrade-in-arms.”

Furthermore, the professor emphasised, “the two men had a lot in common. Both were highly active, hands-on warlords with a deep knowledge of military affairs. Both were obsessive readers and students of history. They did not mince their words and believed that through personal contact they could see into each other’s souls.”

“Crucial to the development of the Churchill-Stalin relationship was their wartime correspondence – more than 500 messages were exchanged, many of them brimming with tension and motion. Churchill flew to Moscow twice to see Stalin and the two leaders also interacted extensively at the Tehran, Yalta and Potsdam summits. These messages and the records of their fascinating and fateful conversations may be read in our book,” Roberts said.

As the professor pointed out, even after the WWII ‘grand alliance’ fell apart and the world was “plunged into a dangerous cold war,” the two men “retained their respect and affection for one another,” with this serving to illustrate “the depth of the relationship between these two unlikely allies.”

Amid the chilly relations between today’s Russia and Britain, Dr. Roberts suggested that the unlikely alliance between two of the twentieth century’s best-known leaders, coming from opposite sides of the ideological spectrum, proved that cooperation is possible. In fact, he said, cooperation should be even easier today.

“If Churchill and Stalin could cooperate then so can the governments of Britain and the Russian Federation. It is a matter of the mutual recognition of each other’s vital interests and a sustained effort at understanding different points of view. Unlike Britain and Soviet Russia there are no fundamental ideological differences between the two states. There are, it is true, conflicting political interests and perspectives that require negotiation – in relation to Ukraine and the Middle East, for example – but there are also many spheres of common interest and concern, above all in relation to the maintenance of peace and the containment of the nuclear danger,” he stressed.

“The grand alliance was beset by many difficulties during the war but these were not allowed to wreck the relationship. With goodwill, they were overcome and a great victory achieved. There is no insuperable obstacle to constructive Anglo-Russian relations – it is a matter of political will and perseverance,” Dr. Roberts concluded.