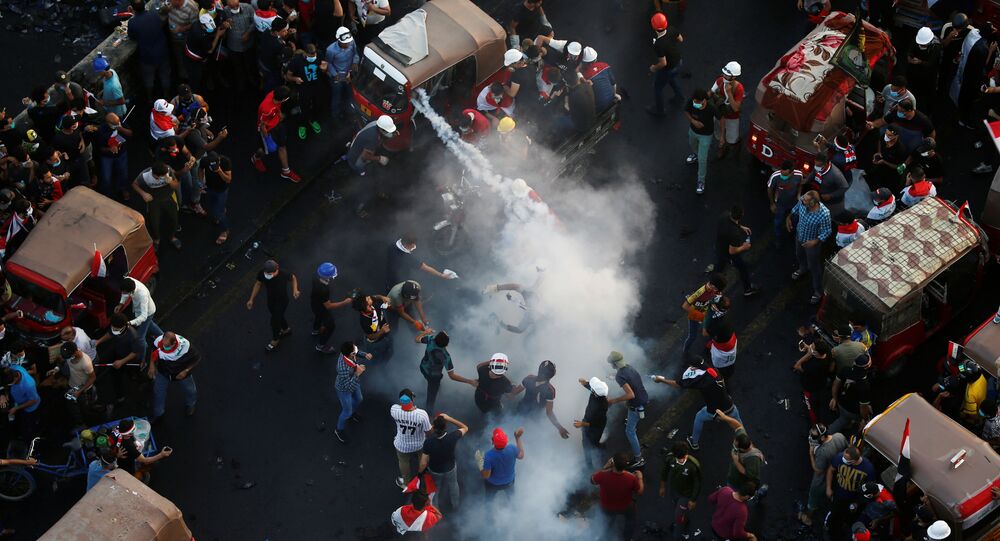 Anti-government demonstrations in Lebanon and Iraq have resulted in the resignation of both countries’ prime ministers. Despite these changes in leadership, one expert argues that a resolution - for Iraq in particular - may not come as soon as it should due to outside actors seeking to distance them from Tehran.

Despite the resignation of Lebanese Prime Minister Saad Hariri late last month and the announcement of Iraqi Prime Minister Adel Abdul Mahdi pledging to step down following the selection of his replacement, protesters in both Middle Eastern countries remain unsatisfied, and demonstrations have continued.

Even with government officials in Lebanon and Iraq calling for the people to come together and work with their governments, it does not appear that the protesters are willing to compromise on their desire to see long-term economic issues addressed by those in office.

Massoud Shadjareh, founder of the Islamic Human Rights Commission, joined Radio Sputnik’s Loud and Clear on Wednesday to discuss the duality of protests within in Iraq and provide his thoughts on why Lebanon’s demonstrators have been able to avoid a similar divide.

Shadjareh noted that while there are layers to the Iraqi demonstrations because “people are out of work and people are having [a] difficult time” economically, there are also “players” involved - particularly the US and Saudi Arabia - who believe that Iraq has gotten too close to Iran in recent years after Tehran provided assistance to Baghdad’s efforts against the Daesh. As a result, those players have set out to loosen those ties by manipulating the real aspirations of the people.

“I suppose it’s only natural for that to happen,” he qualified to hosts Brian Becker and John Kiriakou, noting that both Iraq and Lebanon “are extremely sensitive, and too many players are willing to invest” and sway the countries’ people for their own outside agendas.

Shadjareh said he’s even seen “very genuine footage” of people taking advantage of the economic hardship by distributing money in the street to “take demonstrations one direction rather than the other direction.”

“It is complicated, but I think what is very clear to all Iraqis is that the involvement of Saudi Arabia and [the] US has always been very negative for the Iraqis,” he explained, pointing out that, at the same time, the Iraqis have not forgotten the “sectarianism that was unleashed by Saudis or Emiratis and others” who financed Daesh.

Iran, on the other hand, has been “supportive of the Iraqis,” Shadjareh asserted, “because Iran doesn’t want to have a shattered Iraq neighbor. It would be damaging to Iran to have that sort of destruction just next door, and it's done everything, including sending forces to fight the Daesh and push back” - without preference given to Sunni or Shi’a Muslims.

However, US Secretary of State Mike Pompeo on Wednesday tweeted that he thought the entirety of the protest movements in both Iraq and Lebanon were Iran’s doing, and said the people “want their countries back.”

The Iraqi and Lebanese people want their countries back. They are discovering that the Iranian regime’s top export is corruption, badly disguised as revolution. Iraq and Lebanon deserve to set their own courses free from @khamenei_ir's meddling.

“They are discovering that the Iranian regime’s top export is corruption, badly disguised as revolution. Iraq and Lebanon deserve to set their own courses free from [Ayatollah Ali Khamenei’s] meddling,” Pompeo wrote.

On the topic of Lebanon, Shadjareh contended that despite Hariri’s resignation, there needs to be a “complete change” in order to eliminate the current deadlock between the people and the government.

The Lebanese people “do deserve something much better” than their current leadership, he said. “I think, to some extent, the situation in Lebanon is much more clear, because the demonstrators seem to be much more savvy and are able to actually articulate which direction they want to take. And indeed, they don’t want to … create any illusion of misdirection.”