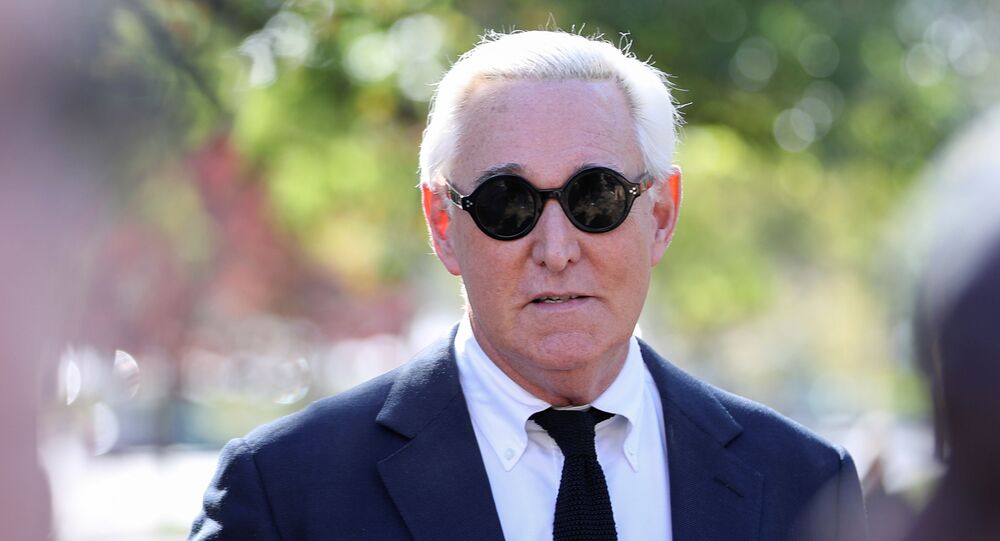 Tuesday marked the beginning of trial proceedings for former Trump campaign adviser Roger Stone, who is facing felony charges related to witness tampering and lying to Congress. While his charges relate to obstruction, the coverage of his case continues to highlight debunked collusion claims and the exhausted Russiagate narrative.

Even though day one of the longtime GOP operative’s trial was solely focused on jury selection, Stone’s infamous, decades-long career in Washington was put on blast and old narratives were revived as corporate media covered his impending court date.

“Trial of Roger Stone Will Revive Saga of Trump and Russian Interference” reads one Monday headline from the New York Times.

As if Stone’s past threats and connection with former US President Richard Nixon weren’t enough to put him in bad standing with the public, Stone’s trial is surely to draw attention, as it runs concurrently with the impeachment inquiry into US President DonaldTrump and will reportedly include testimonies from individuals such as former White House Chief Strategist Steve Bannon.

Joe Lauria, the editor-in-chief of Consortium News, founded by the late Robert Parry, and the author of the book “How I Lost, By Hillary Clinton,” joined Radio Sputnik’s Loud and Clear on Tuesday to discuss why Stone’s trial is still being tied to debunked assertions related to special counsel Robert Mueller’s investigation.

“The media always focuses on personalities … they focused on Trump’s personality, [WikiLeaks founder Julian] Assange, [Russian President Vladimir] Putin, [former Russian President Boris] Yeltsin,” Lauria asserted to hosts Brian Becker and John Kiriakou. Rather than concentrating on the public figures’ actions, the media props up likeability - even in the case of former US President Barack Obama, in that they “ignored all of his foreign policy” and focused on his “great personality,” according to the editor.

Although Stone has been charged with obstruction of justice and lying to Congress, the optics surrounding him - from his prominent back tattoo of Nixon’s head to his career of lobbying alongside the now-imprisoned Paul Manafort - make it easy for the media to continue to use his name to propagate the Russiagate narrative.

Newsweek, for example is still “trying to prove collusion in this story,” according to Lauria. In a Tuesday article concerning Stone’s trial, the magazine described the 67-year-old as being “at the center of the question of whether the Trump campaign conspired or cooperated with WikiLeaks or Russia to leak stolen emails from the Democratic National Committee and Hillary Clinton's campaign during the 2016 election.”

Lauria argued that in actuality there’s “only one crime that’s been committed here,” aside from Stone’s process crimes, “and that is: who stole the emails from the DNC and [Clinton 2016 campaign manager John] Podesta?”

While the answer to that question remains a mystery, it was made clear by the time of Stone’s pre-trial that the FBI received a redacted draft rather than a “final report” from cybersecurity firm CrowdStrike, having never examined the DNC’s server itself. That report’s conclusion - that Russian hackers were behind the theft - set in motion the Russian interference narrative for the 2016 election.

The editor went on to say that even with the leak being unattributed at the present moment, it seems as if we’re “overlooking the fact that these DNC emails were correct, and they gave real information about Hillary Clinton and her [2016 presidential] campaign.”

Despite Stone being a “fraud in many ways,” according to Lauria, the idea that he was some kind of WikiLeaks insider is untrue and more representative of Stone’s bombastic personality and documented attempts to show off his “connections.” In the summer of 2016, once news of the DNC hack had become known, Stone claimed to have insider information from Assange that WikiLeaks was preparing to release the emails, but it’s more likely he only spoke with the WikiLeaks founder through an intermediary, most likely comedian Randy Credico, who gave the adviser no such tip.

Furthermore, Lauria noted that WikiLeaks made a public announcement concerning its cache of Clinton emails prior to the database’s July 22, 2016, launch.

“The Democrats, the intelligence agencies and the liberal media are defending themselves in advance [during impeachment] … They’re playing offense in order to play defense to try and prevent whatever comes out of these investigations,” the editor asserted. As a result of Russiagate failing, they are now going after Trump “over what he did, which is the routine way foreign policy is conducted in the United States: threats, bribes … blackmail.”

Nevertheless, “this is, again, defense against what could be coming down the road in terms of how this Russiagate story began,” Lauria concluded.