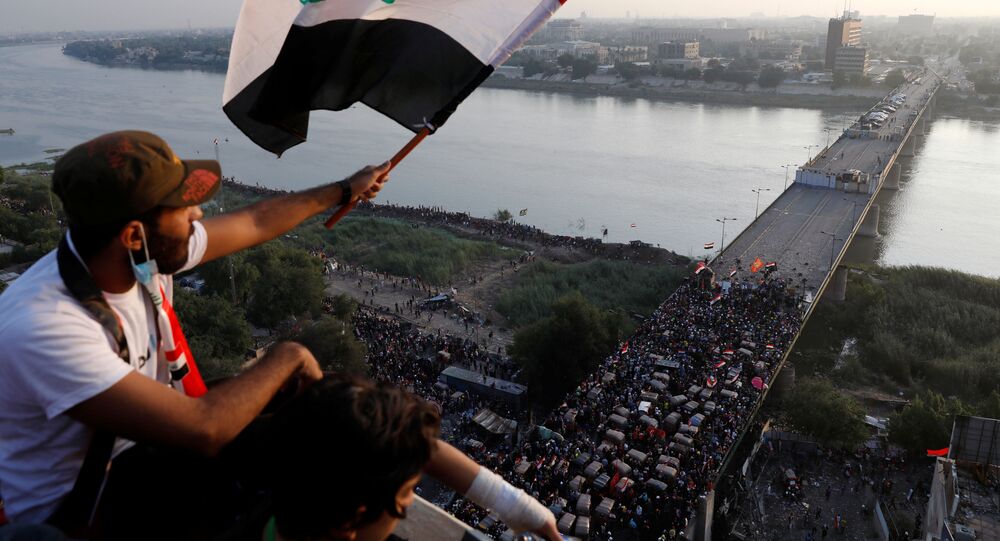 As the death toll rises amid continuing mass anti-government demonstrations in Iraq, US President Donald Trump appears to be developing amnesia concerning their hand in the country’s current state of affairs as they co-opt protester claims of not receiving a proper cut of region’s oil revenue.

The clear history of US involvement in and economic gain from Iraq does not stop Washington from changing the narrative to this day. In Trump’s mind, it is the US that lost out after invading Iraq - primarily when it comes to oil.

During a Sunday press conference following the death of Daesh leader Abu Bakr al-Baghdadi, Trump argued that Washington should have supported legislation to recoup the “many, many billions of dollars” the US “spent” in Iraq.

“If they’re going into Iraq, keep the oil!”

Trump says he could “make a deal with an ExxonMobil or one of our great companies” to extract oil from the Levant in the wake of the killing of Abu Bakr al-Baghdadi pic.twitter.com/7l05smNGzM

“Plenty of US corporations made plenty of money off of those horrid years … because there was rebuilding and there were rehabilitations that had to be carried out at the oil facilities that we destroyed,” Kathy Kelly, co-coordinator of Voices for Creative Non-Violence told Sputnik. “War is never the answer.”

Kelly joined Radio Sputnik’s Loud and Clear on Wednesday to provide her thoughts on what the protests may mean for the future of Iraq and comment on US President Donald Trump’s recent rant on past American policy toward Iraq.

"Their people also have to know that although they have legitimate demands, those demands can be met only through the framework of legal structures,” Iran’s Supreme Leader Ayatollah Khamenei said of the “insecurity and turmoil” in Iraq and Lebanon, on Wednesday during Iran's Khatam al-Anbia Air Defence Academy’s graduation ceremony, according to Al Jazeera.

Commenting on "America and Western intelligence services,” he added, "They are destroying security. This is the worst kind of hostility and the most dangerous and spiteful behavior against a country.”

“I think people have begun to realize that while the kleptocrats, and sometimes servants to foreign proxies, began to develop their powers, they also developed their wallets and their bank accounts,” Kelly told hosts Brian Becker and John Kiriakou. “Something like $450 billion worth of Iraqi oil has been sold, but it hasn’t gone to help the social services … or rebuild the country adequately or improve minimum wages.”

As a result, Iraqis have grown frustrated, because “they have gone through so much trauma, and then they can’t find communal leaders that will really represent them and their needs.”

The most recent estimate from the Iraqi Independent High Commission for Human Rights said at least 100 individuals have died during the second wave of demonstrations.

While the US was able to use a divide-and-conquer technique in the country along ethnic and sectarian lines following the 2003 invasion, Kelly argued that Iraqi voters are now “less willing to say … ‘our problem is the people who practice the Shia faith’ or ‘our problem is people who practice the Sunni faith’ or ‘our problem are the Kurds.’” Now, she said, it seems as if those divides are less prominent, and people are now saying the problems start at the top, with “people who are running this country who’ve been robbing us blind.”