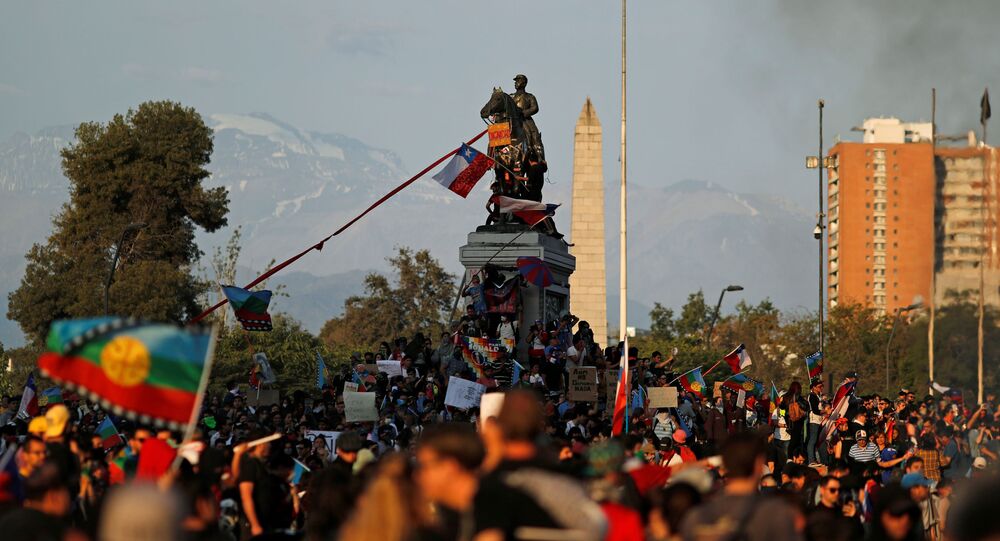 Chilean protesters took to the streets in unprecedented numbers over the weekend, rocking the Piñera administration to its core, eliciting both concessions and also heavy repression from the government. A journalist told Sputnik the protests resonated far and wide in Latin America, clearly influencing Argentina’s elections Sunday.

In Chile on Saturday, an estimated 1.2 million people rallied in the capital of Santiago against decades of austerity measures in the country and in defiance of stiff government repression. The following day, voters in neighboring Argentina rejected President Mauricio Macri’s austerity program, electing Alberto Fernandez, whose vice president is former President Cristina Fernández de Kirchner. In Colombia voters on Sunday dealt a stinging blow to President Ivan Duque’s Democratic Center Party by electing independent and minor party candidates to the mayorships of two of the country’s largest cities, Bogota and Medellin.

Haiti is once again rocked by huge protests seeking the ouster of President Jovenel Moise; earlier this month, indigenous-led protests in Ecuador temporarily forced the government out of Quito, compelling President Lenin Moreno to reject a loan from the International Monetary Fund (IMF) that would have forced austerity measures, slashing subsidies and other social benefits provided to ordinary Ecuadorians by the government.

“Yesterday, I think, it was a big moment for the people in Latin America,” journalist Alina Duarte told Radio Sputnik’s By Any Means Necessary Monday.

“Of course, the US media is not reporting what’s going on, because this could be a really bad moment for this country to understand that the people are protesting because of the consequences of US imperialism. Not only in South America: the demands of the people in Argentina, in Chile, in Haiti, in Colombia, in Ecuador, are exactly the same demands that the poor people here in the US are saying. It’s about housing, it’s about dignity, it’s about education, health care, and that’s why the corporate media are just having a complete blackout on Latin America now.”

On Monday, the protests in Chile entered their 11th day, and President Sebastián Piñera announced new figures would be appointed to head key ministries following the termination of his entire cabinet on Saturday. Duarte, who just returned from reporting on the ground in Santiago, told Sputnik that while protesters were consciously rejecting 30 years of austerity, they were not so conscious of the greater legacy of political persecution they were challenging.

In 1973, a CIA-orchestrated coup d’etat saw perhaps the archetypal neoliberal regime take power when Chilean General Augusto Pinochet overthrew the democratically elected government of Salvador Allende, a socialist, instituting a 17-year reign of terror that saw tens of thousands of leftists and other dissidents tortured, murdered, or otherwise disappeared. While Pinochet was forced to cede power to a civilian government in 1990, his neoliberal policies never ended, destroying the country’s social services as well as organized labor.

“We cannot imagine the terror that people are feeling in some places, because we are talking about a dictatorship of the 21st century. I mean, I was in the same plaza where the government of Chile was torturing people. There is a political persecution against leaders of the student movement. I mean, it’s a real state of terror, what’s going on in Chile,” Duarte said. At least 20 people have been killed in the protests so far, and thousands have been arrested and assaulted. Reports have also surfaced of incidences where Chileans have been disappeared.

​One popular video on Twitter drew explicit comparison between Piñera and Pinochet, highlighting how both men referred to the state’s struggles with protests as being “at war.”

​“Most of the people that were in the streets were young people … they don’t really have access to health care, education; everything was privatized during the last 30 years,” Duarte told hosts Eugene Puryear and Sean Blackmon. “The main demand, or one of the main phrases that they are yelling all the time, is that it’s not only 30 pesos - that was the first excuse or the principal excuse to take the streets, the increases of the metro tariffs - it’s about 30 years. That’s what they are saying all the time.”

“It’s really amazing to see that these young people are not afraid. I think it’s because of a lot of things. They didn’t experience in person the dictatorship of Pinochet; they are not really afraid. I do not think they are conscious about what a dictatorship is: we are talking about, as I said, torture, about disappearings, about violations - it’s really scary, what’s going on. I don’t think they are are really conscious about what’s going on,” she said.

​“The second is because … they don’t have anything, anything to lose. They are in the streets and, for example, there were signs saying that ‘at this point, if the state shot me, they lose,’ because the debts that the students have in all of Chile are amazing - they have debts like here in the US,” Duarte said.

A Mexican citizen, Duarte told Sputnik that she, like so many others across Latin America, had been told “my whole life that if we accept the recommendation of the [IMF] and the World Bank, we would be someday like Chile.” Highlighting how decades of austerity in Chile had fueled the protests, she said, “Now, we are seeing what is being like Chile. So it’s really amazing what’s going on.”

​“Because of the same neoliberalism system, I might say that there are not big unions, big parties of the left who are ready to lead a new movement, a new national project,” the journalist said. “What we are seeing are people who are just saying, ‘This needs to stop. Now.’”

She noted that out of a population of 19 million, an estimated 1.2 million took to the streets in Santiago on Friday, in addition to the thousands that demonstrated in plazas across the country. She described how, despite the massive strikes by mass transit workers that paralyzed the city, people “don’t really care” about the interruptions to their daily lives caused by the protests.

​“It is amazing how even when Sebastian Piñera has said he’s going to cancel the transportation tariffs, the increases of the metro tariffs, he said that he’s going to have a new cabinet. He asked for a pardon for his government, and his predecessors. He said that he was really sorry about it. And this is not enough for the people.”

Following announcement of the concessions, on Sunday Piñera lifted the state of emergency that had been in place since shortly after the protests began.

Duarte was also in Ecuador during the protests there the week before, and said “it’s amazing how the indigenous movement are talking about the consequences of accepting these policies imposed. I mean, it’s not something new. We saw exactly the same policies in Latin America during the 80s and 90s. They used to call these ‘programs of structural adjustment’ during the decades, and now they are just saying that we need to accept them, even if they don’t have a new name. This is not something new, and it’s amazing.”

“For example, the best thing that can happen for Argentina was Chile. Can you imagine the people looking at their neighbor with the military in the streets, curfew, torture?”

“So also now, we are experiencing the same in all of the continent, and I think it’s a really good moment for the people in Latin America, because now here in the US, [US President Donald] Trump is really busy with other things, and we are just everywhere, taking the streets. It’s amazing how they are not saying exactly the same things in every country, but if we analyze the demands, they are talking about anti-systemic demands all over the continent.”

Photos: People in Mexico Take to Streets to Support Protests in Chile