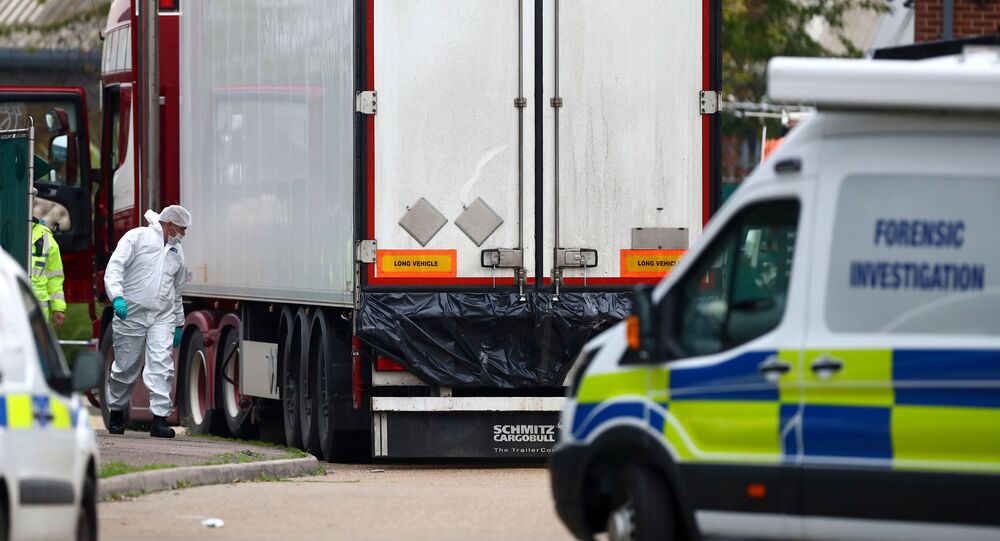 A murder investigation has been launched following the gruesome discovery in the early hours of Wednesday 23 October. It is being led by Essex police with assistance from the UK’s National Crime Agency.

The bodies of 39 people, eight women and 31 men, found in a refrigerated truck container in Essex, England are believed to be Chinese, British police said on Thursday.

We are working with partners including @EssexPoliceUK and Immigration Enforcement to provide specialist support to urgently identify and take action against any organised crime groups who have played a role in causing these deaths.

​Essex police have confirmed that a 25-year-old man from Northern Ireland, a truck driver, has been arrested on suspicion of murder and is currently in custody.

We can confirm that we have secured a warrant of further detention for a 25-year-old man being held on suspicion of murder.

The man, a lorry driver, was arrested in #Grays and will now remain in custody for up to an additional 24 hours.

​The police have asked the media not to speculate on the identity of the truck driver, but British media have identified him as 25-year-old Mo Robinson, from the Portadown area of County Armagh, Northern Ireland.

Essex police believe that the trailer of the truck arrived in the port of Purfleet, Essex from the Belgian port city of Zeebrugge.

The tractor unit of the truck is believed to have entered Essex on Sunday 20 October, having travelled over from Dublin.

At around 12.30 am, local time, the driver collected the trailer and left the port shortly after 1.05 am. Police were alerted just before 1.40 am.

While migrants trying to get into the UK and other European countries hiding in trucks is not something new, Peter Williams, a policing and terrorism expert at Liverpool John Moores University, says the question of how this truck evaded the authorities is something which is still not clear.

According to Williams, the big issue is what will happen when the UK will have to leave Europol - the European Union Agency for Law Enforcement Cooperation - after Brexit:

"The concern for me is when we actually exit Europol. At the moment we've got support in that area in terms of intelligence and also with links with all the European agencies such as Frontex, which basically, if you like, control the borders. Now, when we exit Europol, we will lose that."

Intelligence cooperation will be "drastically" affected after Brexit, the policing and terrorism expert stressed:

"Up until now, the UK has been one of the prime partners, one of the major partners in Europol. When we exit we have no right, or we have no authority to access or receive intelligence."

Of course, the UK, just like Norway and Switzerland, that have operational agreements with Europol, could sign agreements with the EU Law Enforcement agency, but that won’t be the same level of cooperation Williams explained.

"The problem with that is those contracts become dated very quickly because crime is changing constantly. And that's one of the major problems which the UK is going to have to address."