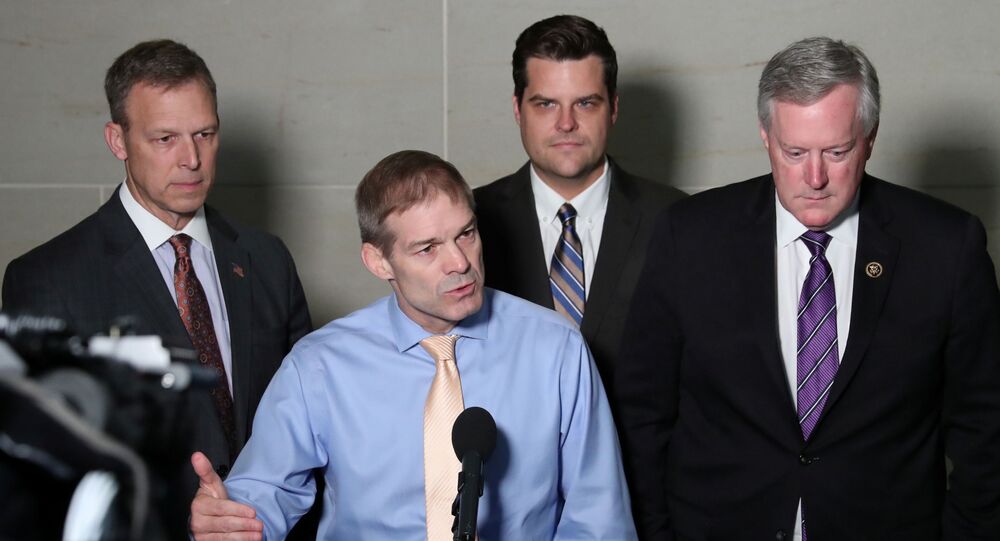 Leaks, rumors and spectacles have abounded since the behind-closed-doors impeachment inquiry into US President Donald Trump began. However, despite both Democrats’ and Republicans’ best efforts to control the narrative before it reaches the public eye, their theatrics appear to be of little interest to the American people.

Not long after Trump called upon Republicans to “STICK TOGETHER AND FIGHT,” Rep. Matt Gaetz (R-FL) banded together a squad of more than two dozen GOP lawmakers on Wednesday and stormed the Sensitive Compartmented Information Facility (SCIF) in which the House Intelligence, Oversight and Foreign Affairs committees are conducting impeachment hearings.

WATCH: here's the video of when 2 dozen GOP members, led by @mattgaetz entered the secure hearing room (SCIF) to interrupt witness testimony in the #ImpeachmentInquiry as they demand access, despite not being committee members. They're complaining it's a "Soviet-style process". pic.twitter.com/8KddYz3r9D

However, Gaetz’s operation reportedly failed to go as planned: according to Fox News’ Chad Pergram, some Republicans in the group actually requested they be arrested in order to advance their own narrative of Democrats hiding something behind closed doors - despite the fact that a total of 55 Democrats and 48 Republicans make up the three relevant congressional committees conducting the impeachment inquiry.

6) Fox is told there was never any chance mbrs who barged into SCIF would be arrested by USCP wBut some mbrs members asked to be arrested. They wanted the optic of being frog marched out of the SCIF in front of TV cameras. That would help w/GOP narrative of Dem process abuse

The Huffington Post revealed the congressman’s movement was also being filmed by crew members of HBO’s “The Swamp.” As if the obvious thirst for footage was not bad enough, it’s also reported that Gaetz violated House rules by issuing “expired congressional passes to some uncredentialed reporters” and crew members from the HBO show.

Journalist and author Daniel Lazare joined Radio Sputnik’s Loud and Clear Thursday to discuss what the current impeachment inquiry means for most of the American public and provide his take on why Acting US Ambassador to Ukraine William Taylor’s recent congressional testimony may not be the bombshell Democrats are expecting.

“I think both sides are engaging in theater … [House Intelligence Chairman] Adam Schiff is a theatrical master,” he asserted to hosts Brian Becker and John Kiriakou. “He’s played this Russiagate thing … out [in] a highly theatrical, highly public way since early 2017 … He’s an expert [at] leaking, at the misleading link. He pilloried poor Carter Page; he touted the Christopher Steele memo. And then when the memo was disproved, he suggested Russia disinformation experts were responsible for the memos.”

Despite the long-term Russiagate efforts by Democrats and Gaetz’s recent rallying of the Republicans, the public has been pretty turned off by any current narrative surrounding the impeachment inquiry from either side, according to Lazare.

He pointed out that another case of the American public’s “weariness” with the “Russia narrative” was exemplified when former US Secretary of State Hillary Clinton alluded that the Russians were “grooming” Democratic presidential candidate Rep. Tulsi Gabbard (D-HI) to be their puppet in the upcoming 2020 election.

Not only did fellow presidential candidates Andrew Yang and Senator Bernie Sanders (D-VT) come to Gabbard’s defense, but Clinton’s application of Russiagate had virtually no negative impact on the congresswoman’s poll numbers.

As for Taylor’s Tuesday testimony on Capitol Hill, Lazare believes that not much can currently be made of Schiff’s words or the ambassador’s opening statement, considering the former’s partisan record and the latter’s strong support of the Ukrainian government.

He argued that due to Trump’s isolationist view on US foreign policy regarding Ukraine, “it’s clear that a guy like Taylor would be basically hostile to Trump’s position and, therefore, highly suspicious of what Trump was up to and quick to take offense.”