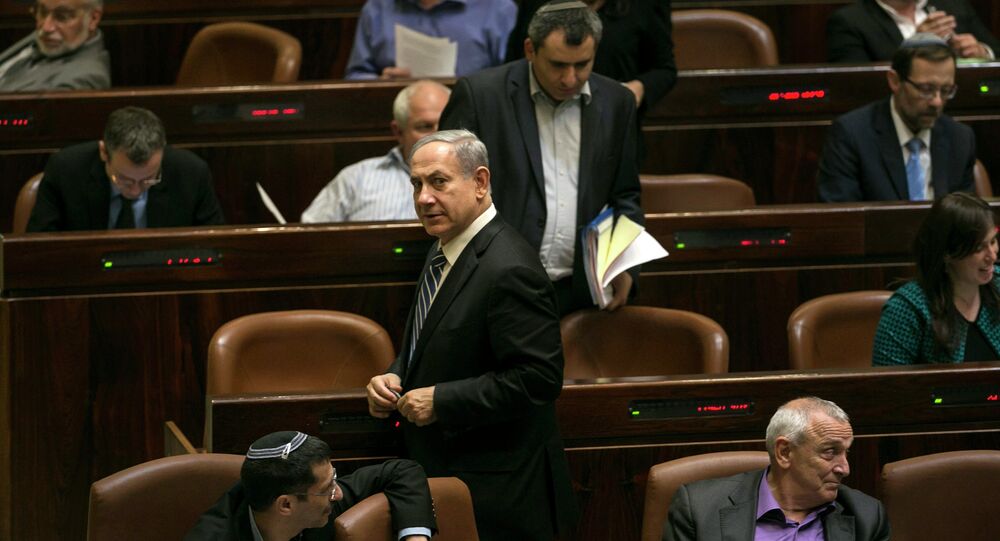 Netanyahu handed back the mandate to form a government to President Reuven Rivlin on Monday after he failed to form a majority coalition within a 28-day deadline, granted to him after the September general election — the situation resembling the April deadlock when no political camp secured a majority. Rivlin will now task Gantz and his alliance with a similar mission within the same four-week deadline.

According to the September 17 election’s official results, Blue and White secured 33 seats, while the ruling Likud party won 32. Even including pledges of support from allied parties, both are falling short of the 61-seat majority necessary to form a ruling coalition.

Little Chance for the Impossible

Neither of the two rival blocs seems to be able to build a majority government unless they agree to make certain concessions, Ksenia Svetlova, the Interdisciplinary Center Herzliya expert and former Israeli parliament member, stated.

“Calculating all the options mathematically, you realize that even though politics is the art of the impossible, at the moment there is little chance of the impossible. Of course, there might be an unexpected twist, but it looks as if nobody would be able to form a government, unless, of course, the parties make concessions on their principled demands — unless Gantz stops demanding a government without Netanyahu and allows him to become second in rotation, and unless Netanyahu respectively agrees to the same”, Svetlova said.

Without Likud, Gantz’s only shot at success may be to form a minority government, which does not require the 61 votes of Knesset members to begin its tenure, but would one way or another require a partnership with both Arab lawmakers from the Joint List and Avigdor Liberman’s Yisrael Beitenu, which are far from being on good terms with each other, Professor Gideon Rahat, a senior fellow at the Israel Democracy Institute (IDI), noted.

“The scenario, which is unlikely but not impossible, is a minority government. Gantz will take his party on its own or with other parties for a vote in the Knesset, and if he will get support from the Arabs and Lieberman will not vote against it, he will have a government. So there is a possibility there, but it is very unlikely because Lieberman and the Arabs are not in good relations”, the expert explained.

If Gantz fails to form a government, under the existing procedure, the mandate will return to the president, who will have to decide whether to assign the mandate of forming a government to any other candidate or go for another election.

Technically, Rivlin may give a chance to any Knesset member to form a government, including Lieberman, who has been rooting for a unity government comprising his own party, Likud and the Blue and White alliance. Yet, according to Svetlova, such an option also seems unlikely.

“Firstly, Lieberman is not known to have some sort of ‘magical’ abilities [to form a government] that larger parties do not have. Secondly, it will be unprecedented to task a person whose party received such few votes. Again, it seems to me that this is unlikely at the moment”, she explained.

IDI’s Rahat was also dubious about the prospects of somebody else trying a hand at ending the deadlock.

“Who would be a third candidate [to form a government]? Maybe somebody from Likud, but this means that Netanyahu has to step down. It is hard to see how this can happen”, he noted.

Amid the continuing uncertainty, the country might as well go to the polls once again — for the third time in a year, Svetlova noted.

“If after all these manipulations, all these efforts, there is no government in the end, then, sadly enough, Israel goes to the polls in March 2020. I believe this is not an impossible scenario”, she said.

Professor Rahat, on the other hand, stressed that a third election would hardly solve the problem, as its results would likely be more or less the same.

“Most people are really tired of these elections. Nobody can really promise that a third election will bring any solution … If we have more or less the same results, Netanyahu will be prime minister forever — temporarily forever. We are in a loop, and nobody enjoys it”, he said.

Mutiny on the Bounty?

Not only Netanyahu’s political career, but his whole future hangs in the air as he faces corruption charges. Hearings on the three corruption cases brought against him began in early October.

Israeli media have been speculating about the likelihood of “the mutiny on the Bounty” in Likud for quite some time. Even though some Likud members appear to share such moods, the move is complicated by the party’s known loyalty to its leaders, Svetlova noted.

“Likud is a party known for loyalty to its leaders. Likud stands out from the rest of Israeli parties, which hold primaries almost every year, and they [Likud] are very proud of it. Therefore, it is not easy to make any progress on the issue, and perhaps even to start some sort of discussions about the possible replacement of Netanyahu. But it is known that many people want to replace him ... There are quite a lot of MPs who understand that they should not go down with their leader”, the expert said, stressing, however, that a lot depended on what kind of charges Netanyahu would face.

Rahat, in turn, noted that other Likud members were too afraid to try to throw Netanyahu under the bus at this point.

“There are no signs that this will happen because everyone who tried to challenge Netanyahu in the last decade has suffered, left Likud for a while or established another party … So I think that everybody is afraid of doing it”, he noted.

Speaking about the overall sentiment of the Israeli society, Svetlova noted that the latest development was rather a “traumatic moment” for the country.

“For the first time in a decade, someone other than Netanyahu has received a mandate from the president to form a government, but the apathy is too large …  This is a rather fateful moment for many Israelis after all, because Netanyahu is no longer perceived as a man capable of working miracles. He used to be called a ‘magician,’ but he lost that title this time, apparently”, she concluded.

Netanyahu, who turned 70 on Monday, has been at the government’s helm for 10 years. He became the longest-serving prime minister in Israeli history in June, beating the record set by the Jewish state’s founding father, David Ben-Gurion.