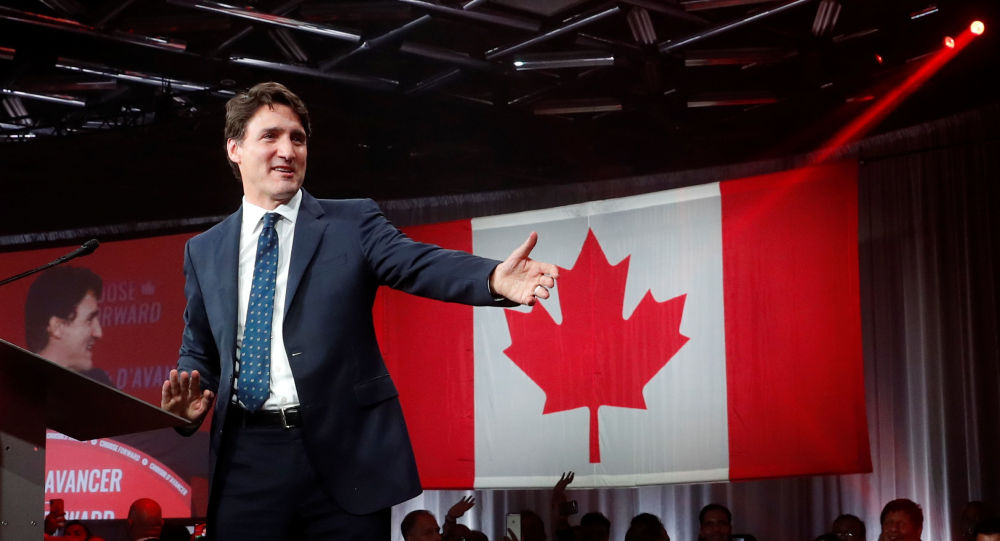 Preliminary results for the Monday federal parliamentary elections showed Trudeau's Liberal Party leading in 158 districts out of 338, while the Conservatives lead in 122 districts. Bloc Quebecois, which supports a greater autonomy for the French-speaking province of Quebec, showed third, securing 32 districts.

Dr. Allan Tupper, Professor and Head of the Department of Political Science at the University of British Columbia gives his take on the variety of intrastate domains of Canadian politics, inter-parties interactions amid other issues, following the 2019 federal election that led to Trudeau's second tenure as the Canadian Prime Minister.

Sputnik: Before the election, NDP Leader Jagmeet Singh stated that he would try to form a coalition government with other parties if the Conservatives win the most seats in the election but fail to secure a majority. Since the Liberal Party has to form the minority government, how likely is it that NDP forms a coalition with the Liberals?

Dr. Allan Tupper: Well, it is an interesting question. We don’t have a lot of coalition governments in Canada. There is a very limited tradition of that. And generally minorities, like the one Mr. Trudeau achieved last night, they make an agreement with one of the other parties, several of the other parties and they govern on the vote by vote basis, almost. So coalitions of the Europeans […] are not a big common feature. I don’t think there was a lot of choice, a lot of prospect for that. Particularly, before an election starts, it’s not initially ever announced things like that, in Canada.

Subjectively, things have changed and we’ll see what happens and I think Mr. Trudeau and Mr. Singh will obviously form some form of government, but I don’t think it will be a coalition.

Sputnik: So you don’t think that there will be any coalition if we speak about NDP, Conservatives or Bloc Québécois or other parties?

Dr. Allan Tupper: No, I don’t see that and particularly the conservatives and the Bloc, I don’t see that as likely at all. They are very direct contestants for the same sort of vote in Quebec. And moreover the Conservatives have said very inflammatory things about the Bloc, as you know, […] the separatist agenda and all those kind of things. So it seems like a pretty implausible scenario for that. And I don’t even think you’d get near the seats needed to form a majority. You have to get the NDP on that, as well.

Sputnik: Bloc Québécois unexpectedly outperformed the NDP, which, according to polls, was in third place in terms of the number of voters. What do you think is the reason for the success of the Bloc Québécois?

Dr. Allan Tupper: The Bloc Québécois has roots now for nearly 30 years in Québec. It became prominent when the Progressive - Conservative Party in Canada collapsed and was essentially eliminated in the 1993 general election. And ever since then it’s formed a basis of continuing presence in Quebec politics. It went to a fairly low period over the last year but fortunes have restarted and there’s been changes in provincial politics. They have done an effective job in dealing with climate-change issues. The Bloc has a progressive agenda in addition to its nationalist agenda that in affect is a direct challenge to the NDP. So in Quebec you would have a wide range of choices for people who are environmentally conscious, and a lot of Quebecois are. There is a liberal option because they would stress this. The Greens are there but didn’t really produce much. But then you have the Bloc and the NDP. The Bloc has a much deeper tradition of success than the NDP in Quebec which for years has been a very great difficulty in Quebec politics at the national level. I see that as quite understandable and almost predictable, once the current leader Blanchet straightened out some internal dynamics and then got on to the agenda.

Dr. Allan Tupper: Well, important question. I mean, I don’t even know if we’re really looking at four years. Canadian minority governments occasionally last long time but normally about two [years]. That we’ll see. The important thing you were asking is the tensions. Obviously the ones we’ve seen already – climate change, this is one where there is substantial difference between them. The conservatives opposition to carbon tax and their apparent alliance with conservative [...] premiers, and we saw the court cases and all those kind of things. It’s a divisive issue. The conservative party garnered 70 percent of the popular vote in Alberta, the major oil producing province. They’ve always done very well but this is very high and it’s up 10 percent from 2015. They have all the seats except one – the Alberta has more seats. An oil-producing province could be very difficult to deal with on climate change issues and that’s a fracture between Alberta and BC. And, of course, the national level between the two parties, I think there is going to be tension there.

I think the tension on the other side of the coin, as well as on certain economic matters, particularly debt and deficit, depending on how the economy proceeds, there is quite different picture there to deal with. And I think there is still continuing differences of opinion about trade issues and foreign policy issues. But those have been more muted and tend to be more specialist, as opposed to the mass politics level. The final thing I say there in the potential friction, is a whole lot of questions that might emerge about aboriginal and indigenous issues in Canada where there is potential, I think, between those two parties. I suppose I should add a final one, I mean I don’t know how personal relationships [between] the party leaders, I obviously don’t know those, but other media tells us. But there is some quite frank statements by Mr. Sheer on the last English leaders debate about Trudeau’s ethics, he was called a liar and so on. I don’t know if that’s just water off the back or it is sort of an occupational hazard - have all these things, but those are quite strong words, by the terms of Canadian politics and there was a personal dispute, personal dimension to that dispute.

Sputnik: Despite the fact that Donald Trump was the first to congratulate Trudeau on his victory, the relationship between them can hardly be called 'friendly'. In 2018, Washington announced the introduction of high duties on steel and aluminum from Canada. In turn, Trudeau retaliated with tariffs on US goods. What changes should be expected in relations between the US and Canada during Trudeau’s second term?

Dr. Allan Tupper: I don’t see many… I think you’ve phrased it well; Canada-American relations are not particularly good at this point. But the US always has a president that defends national interests much more strongly than Canada defends it. Canada is a country of 1/10th of US population. And it is not, in any way, a super force in the world. Therefore there could be tensions at all times. The other one – this is a particularly acute one - because of the unorthodox nature of Trump and some of the things he says and does and so on. They are highly controversial in Canada. So I think on all those kind of matters those will be sorted out. I think it is somewhat different now in so far as if you look around at G7 leaders – most of them are becoming increasingly cool toward Trump.

At the start of it, I think, either they were dealing with it as they saw fit or trying to get a sense of him or maybe even giving him the benefit of the doubt. But I think they’ve come: Macron, Merkel, Abe in Japan, Trudeau – they’ve all made their positions on those kind of things pretty clear on the variety of rights issues, they’ve all spoken out about the killings, lack of or absence of gun control etc., etc. So we’ll see what happens and I think they hope for a Democratic president.

Sputnik: What major foreign policy steps should be expected from the Trudeau administration during the next four years?

Dr. Allan Tupper: Well, his major problem right now is his relationship with China. I mean, the US is a big enough one and so on, but the extradition charges, pending against the executive of Huawei, really evoked a strong Chinese reaction and surprised Canada, who are not Canadians anyway, who are not used to that kind of direct and active exercises of national interest by China. And that has to get sorted out. Canada has a lot of trading relationships with China and other relationships are planning to build on. This has to get straightened out and it is hard to say how it will be. So that is a very substantial priority.

The continuation of the Trans-Pacific Partnership and its extension, if possible, is certainly an important goal of the Trudeau administration and getting a proper conclusion too is very important as well as a deterrent resolution or a weakening of some of the tariff moves by both sides which is antithetical to the whole notion of trade. But that’s been one of Trump’s trademarks.

So there is a lot going on there. The other thing about foreign policy in the Canadian electoral poll is not in question and you can see it in these elections. It really remains outside of realm of politics.

Trudeau Gets Obama’s Endorsement for Reelection Ahead of Canadian Vote