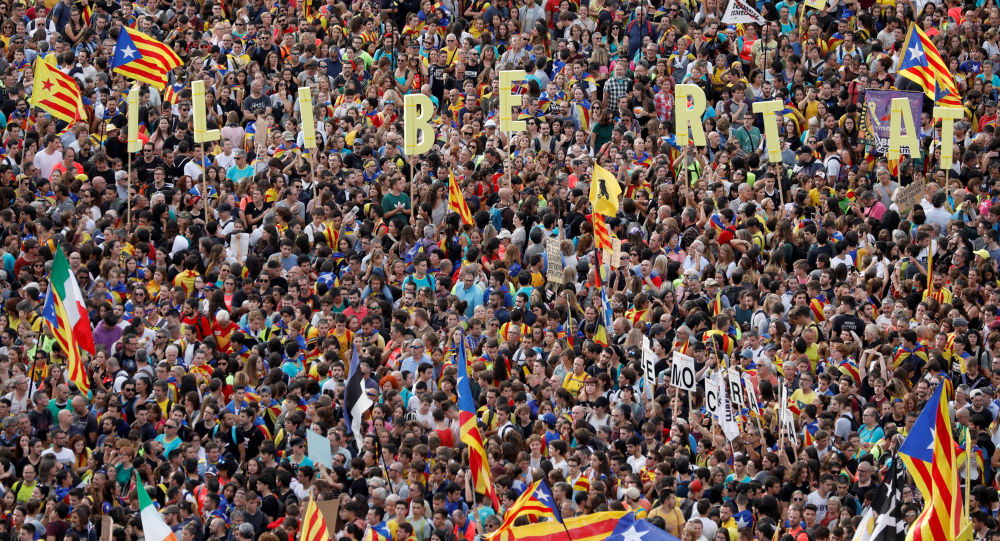 As pro-independence protests in Catalonia swell once more, the issue will have increasingly large reverberations through Spanish society, manifesting in a polarization between Catalan and Spanish nationalists as Spaniards grow weary of the perennial problem, a journalist in Barcelona told Sputnik.

Barcelona police told Reuters Friday that the massive march swelled to more than half a million people. “You can’t hear the formal part of the demonstration,” Dick Nichols, the correspondent for Spain and Catalonia for Green Left Weekly, told Radio Sputnik’s Loud and Clear Friday, noting the march was “not really a demonstration - it’s an occupation of Barcelona.”

“This is the result of three huge marches that came down from provincial cities, which were much bigger than anybody anticipated,” he said, noting it was a measure of “just how angry people are with this court decision.”

Protests were sparked in the northeastern Spanish province of Catalonia five days ago when the Spanish Supreme Court handed down stiff prison sentences for nine of 12 Catalan officials who participated in the botched 2017 attempt to force the issue of independence from Spain by holding a referendum in Catalonia - the anniversary of which passed just days earlier. The officials were found guilty of treason, rebellion and misuse of public funds, with nearly 100 years of jail time split between them.

Since then, marches have grown larger and more militant, with 128 people arrested and 62 injured since Monday.

A strong national identity has driven Catalan autonomy for centuries, with Catalonians speaking a different language than the rest of Spain - closely related to Occitian just across the border in France - and being able to look back on their region’s legacy as the independent Kingdom of Aragon, which only united with the rest of Spain into a single kingdom thanks to a convenient marriage between Ferdinand of Aragon and Isabella of Castile in 1474.

Nichols said his impression was that the court’s decision “marked a turning point. It means that a lot of people who were - not pro-independence, but were certainly in favor of a Catalan right to self-determination - will now move into the independence camp. And it means that people who were democrats, but not at all supportive of Catalan nationalism, will move across into the camp of those who support self-determination.”

Nichols said he saw shopkeepers in his neighborhood close their businesses for the day in order to march whom he’d never seen participate in a march before.

In the rest of Spain, however, Nichols identified two movements. The Spanish nationalists, who view Catalan nationalism as a threat to Spanish national unity, he said would “produce a shift to the right” and a stronger vote for Vox, the neo-fascist party that harkens back to the days of the Francisco Franco dictatorship, which sought to destroy Catalan national identity completely.

At the same time, there is a strengthening of support for a political solution in Catalonia among people who realized “this cannot go on forever,” Nichols said.

“The EU is praying … just hoping this will go away,” Nichols said, “and they just repeat this line from Madrid that the court trial was done properly, that it was a meticulous example of the application of the justice system. There’s already been a fissure in the British Parliament, where the acting foreign minister got up and repeated that line, the European commissioner in charge of foreign affairs repeated that line, but the sentiment, even inside the national parliaments of the European Union, is becoming more and more pro-Catalan.”

“A little indicator here is that La Monde ... which has always been strongly anti-an idea of a Catalan independence, came out in an editorial a couple of days ago saying something has got to be done: the Spanish government just can’t go on refusing to treat this politically. And that’s them getting nervous about the impact the whole Catalan question will have on the European Union as presently structured,” he said.

Nichols noted the protests were so big, the “El Clasico” football match between clubs Real Madrid and Barcelona had to be moved and postponed - an almost unthinkable decision, according to some media outlets. “That’s an indication of the nervousness of the powers that be,” he said.

“I would expect there to be ongoing mobilizations, demonstrations, protests up until at least the 10th of November,” Nichols said, describing the cat-and-mouse game played by organizers and the authorities trying to shut down their websites and networks online.

“It can’t be resolved until there is a crisis in the Spanish state,” Nichols said, noting that meant “a split in the Spanish establishment, which starts to put, for example, the more moderate Patriot block against the really extreme unconditional Spanish unity block. And we’re not at that stage yet. For that to happen, there will have to be continuing mobilizations here, there will have to be a reflection of that inside the Spanish state, in a growth of sentiment that ‘we can’t let this go on.’”

“An indicator will be, to help answer that question, the result of the elections,” he said, noting they would likely yield increased polarization between the two extreme camps of unity and independence. “After that, we can probably have a bit more of an intelligent discussion about what’s likely to happen.”