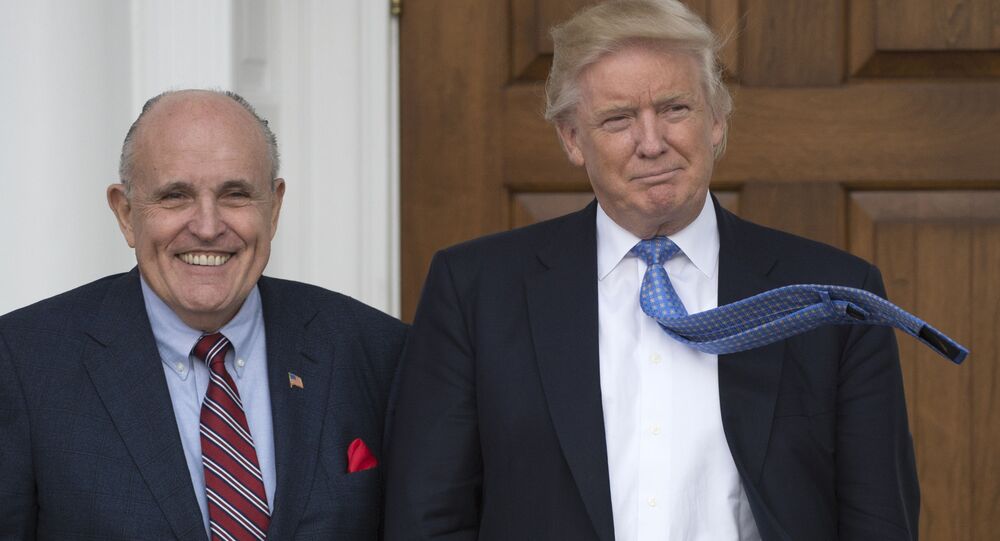 US Ambassador to the European Union Gordon Sondland told lawmakers Thursday he opposed US President Donald Trump’s lawyer, Rudy Giuliani, getting involved in US-Ukraine affairs. Writer Joe Lauria told Sputnik that Trump’s real mistake was getting personally involved with their investigation, turning a legal question into a political one.

Sondland’s opening statement to the House of Representatives committees on Intelligence, Oversight and Reform and Foreign Affairs was leaked to the media prior to his testimony, presenting himself as someone opposed to Giuliani’s involvement in US State Department affairs.

“We were also disappointed by the president’s direction that we involve Mr. Giuliani,” Sondland said about including Giuliani in negotiations to arrange a meeting between Trump and newly elected President of Ukraine Volodymr Zelenskyy, adding that he only included the former New York City mayor because it was “the key” to convincing Trump to begin a healthy relationship with the new government in Kiev.

In a July 25, 2019, phone call, Trump pressed Zelenskyy on both the question of Crowdstrike, the NATO-linked security firm that claimed the Democratic National Committee’s server had been hacked by Russian spies prior to the 2016 election, as well as that of opening an investigation into former US Vice President Joe Biden and his son, Hunter, who once sat on the board of gas company Burisma Holdings. In 2016, then-VP Biden forced Kiev’s hand in firing Prosecutor General Vyktor Shokin, who was in the midst of an anti-corruption probe of Burisma at a time that Hunter sat on Burisma’s board of directors.

When news of the call, its contents and the objections raised by a hushed-up “whistleblower” to the discussion emerged, US Democrats immediately opened an impeachment inquiry, leading to Sondland’s appearance before the legislators-turned-grand jury on Thursday.

Lauria, the editor-in-chief of Consortium News and author of the book “How I Lost, By Hillary Clinton,” told Radio Sputnik’s Loud and Clear Thursday that Trump’s real mistake wasn’t involving Giuliani, who is his counsel, but rather involving himself personally in what was until that point a legal investigation, turning it into another political battle.

“What we’ve got are two huge camps vying for power in US courts: they’re called the Republicans and the Democrats. The Democrats are worried about, it appears, that the Inspector General of the Justice Department has already written and filed a report about the misuse of the FISA court - the Foreign Intelligence Surveillance Act court - to try to get a warrant to spy on a member of the Trump campaign - and in that sense the entire campaign, whoever talked to that person, Carter Page - based on this opposition research that the Democrats paid for. That could be very damaging to someone like [former FBI Director] James Comey, for example, and perhaps other Democrats in the so-called ‘intelligence community’ at that time,” he said.

“We have to see this in the context of Russiagate,” Lauria said, noting that Attorney General William Barr and US Attorney John Durham are in the midst of an investigation into the origins of Russiagate. Barr opened the inquiry in May, once Special Counsel Robert Mueller’s probe of alleged Russian collusion with the Trump campaign in the 2016 election reported it had found no evidence of such collusion, leading the US Justice Department chief to wonder why and how Trump’s campaign came to be surveilled in the first place.

“Now, Rudy Giuliani, who is the personal lawyer of the president, he says that he was defending his client against these allegations of collusion, that he started working on this well before the Mueller Report ever came out, and certainly before Biden announced he was going to be a candidate. Whatever he’s digging up, and he’s already come up with a lot of documents, he’s talking about even more. We have to put our emotions aside, if possible, to look at this story, Brian, and that’s the real issue here - people are so riled up ... to be objective about the story, you cannot be emotionally invested on either side,” Lauria said. “Let’s listen to what people are saying, and that’s impossible now.”

“So Rudy Giuliani is being destroyed now, essentially, because he’s digging too deeply into the origins of Russiagate and because he’s, in the meantime, finding out stuff about Joe Biden that cannot be denied, appears on the surface to be corrupt. Biden himself admitted it in that video,” Lauria told host Brian Becker. “This is such a dirty political game,” he said, noting that Sondland “doesn’t seem to know anything” and is pleading ignorance of Giuliani’s actions “as if what Giuliani was doing was a huge crime.”

“Trump should never have gotten involved,” Lauria said about the president’s phone call pressuring Zelenskyy to help. “That’s a legal issue, and he made it political. He’s tainted, now, everything that Barr is doing, that Durham is doing, that Giuliani is doing. This was the really fatal mistake.”