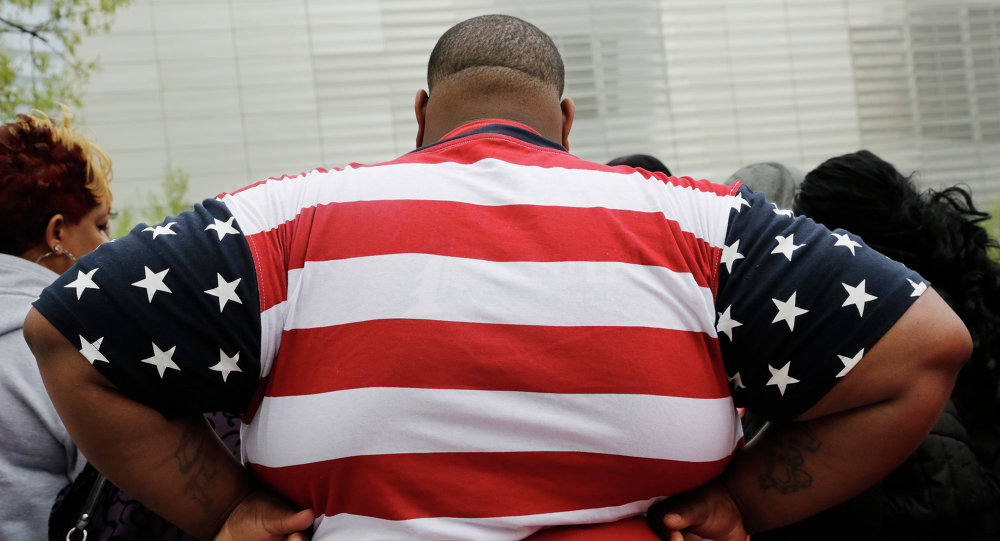 Striking the Right Balance: How to Fight Obesity Without Tipping Over Into 'Fat-Shaming'

Although the overweight problem is ringing alarm bells in developed Western countries, the discussion concerning obesity risks morphing into the fat-shaming debate. International academic and weight loss experts have tried to strike the right balance.

Obesity is the new smoking, says Cancer Research UK (CRUK), a cancer research and awareness charity, revealing that corpulence has become the second biggest preventable cause of cancer in the UK in a nation-wide campaign.

To draw attention to the problem, the charity has designed billboards depicting huge cigarette packets with popular brand names being replaced with the word "obesity".

Like smoking, obesity puts millions of adults at greater risk of cancer. We need the government to take action to improve our environment and help everyone live more healthily. Want to know what they can do? Find out more: https://t.co/sydwNrQL36 pic.twitter.com/kaQTwZRRwq

​While turning the spotlight on to the overweight issue, CRUK touched yet another sore point called "fat-shaming": a group of British health professionals published an open letter quickly signed by over 9,000 people urging the charity to stop the controversial campaign.

"Oh great, CRUK are back with another round of fat-shaming and wildly triggering ads", wrote a Twitter user under the handle Such Heights.

Oh great, CRUK are back with another round of fat-shaming and wildly triggering ads. https://t.co/l4dVa9yr8U

​However, some social media users hold quite the opposite stance: "Cancer Research UK says that obesity has more chance of causing cancer than smoking ... UK responds by attacking CRUK for 'fat-shaming'", a Twitter user called Adam Williams noted.

Cancer Research UK says that obesity has more chance of causing cancer than smoking ... UK responds by attacking CRUK for “fat-shaming”. This countries population really have lost themselves.

​While the country's National Health Service (NHS) is raising alarm over the prevalence of obesity increasing steeply since 1993 in the UK, the British Psychological Society argues that obesity is not a choice or lack of will and that "fat shaming" and "fat stigma" can severely harm people's physical and mental health.

Linda Bauld, a professor of Public Health with the Usher Institute at the University of Edinburgh and who works at Cancer Research UK, says that while she understands the criticism over CRUK's message, she believes that some people have misinterpreted the charity's campaign.

"We have a responsibility as a very large cancer charity to communicate to the public about the risks of overweighting and links to cancer – the second leading preventable cause of cancer in UK and many countries", she underscores. "And in order to get that message across to the public and the government sometimes it is necessary to use images and words that people might find uncomfortable".

She explains that the decision to use images of a tobacco pack was made intentionally to draw people's attention. Yes, it is a controversial campaign, but "it was intended to be controversial".

​Steve Miller, a British author and weight loss motivation master, agrees that CRUK's basic goal was to warn people, suggesting that "it was a national disgrace" for certain parts of society of labelling the charity "fat-shamers”.

According to Sigrid Bjerge Gribsholt, an MD and PhD at the Department of Clinical Epidemiology at Aarhus University, Denmark, the overweight problem indeed deserves maximum attention for being an "important risk factor for cancer".

"This is important knowledge - both for the patients because it might lead to increased focus and earlier diagnoses, which again may lead to better prognosis", Gribsholt stresses. "For the society and the government, such information stresses the importance of preventing and treating overweight and obesity".

According to the NHS, obesity-related hospital admissions in England rose by 15 percent in 2017/18. Furthermore, in its May 2019 study, the NHS highlighted that almost 64 percent of adults in England in 2017 were overweight or obese. "In 2017, the proportion of adults who were obese was 29 percent, higher than in recent years", the survey said. "Morbid obesity has also increased, from fewer than 1 percent in 1993, to nearly 4 percent in 2017".

Citing the WHO, Gribsholt notes that the prevalence of obesity has tripled since 1975. As the numbers are still increasing, one may expect more hospital admissions due to obesity, she says.

'We are in Danger of Normalising Fat'

CRUK workers are not the only individuals who have recently come under heavy criticism over the "fat-shaming" narrative.

"In August, 53 Americans died from mass shootings. Terrible, right? Do you know how many died from obesity? Forty-thousand", the host said during his show Real Time with Bill Maher. "Fat shaming doesn’t need to end. It needs to make a comeback. Some amount of shame is good".

The response was not long in coming: The host of CDS' "Late Late Show with James Corden" retorted that the only thing "fat shaming" actually does is make people feel depressed and provoke self-destructive behaviour.

"If making fun of fat people made them lose weight, there'd be no fat kids in schools", Corden remarks.

"Unfortunately overeating may well contribute to the obesity epidemic in the US but Maher was quite wrong to suggest that there was a place for fat shaming", Fry underscores.

The scholar explains that there are many reasons why people are obese and they often have nothing to do with food consumption – some of them are genetic, metabolic, endocrine, etc. "No-one has the right to openly criticise an individual in this way without first knowing precisely why he/she is so fat", Fry stresses.

In 2018, 9 states reported #obesity prevalence at or above 35%. https://t.co/SM9nH8DKQL pic.twitter.com/uyxMEkZvDx

​For his part, Steve Miller suggests that one should not leap to conclusions with regard to Maher's message.

"I suspect Bill is saying is: we need to constructively make it clear that being fat is not good for you", the British author says. "He was coming from a health perspective. And I think what he was saying, quite rightly, is that we are in danger of normalising fat because people are becoming too nervous to speak out about it".

"I would support an advertising campaign that did say things like 'If you are fat, you are on death row'. I think we have got to get stronger. And we have got to have some shock tactics to encourage people to manage the weight", he opines.

According to the CDC National Centre for Health Statistics, in 2015-2016 the prevalence of obesity in the US was 39.8 percent and affected about 93.3 million American adults, while the percentage of adults aged 20 and over who were overweight, including obesity, amounted to 71.6 percent.

Government May Play a Huge Role in Fighting Obesity

So what needs to be done to tackle the problem and how should the government address the issue?

"The main cause of obesity is food consumption", explains British professor Linda Bauld. "It is not lack of physical activity.  Physical activity is important but what has driven epidemic globally is food consumption and particularly consumption of too many calories – it is overeating. But in addition it is the type of food that developed economies provide to their population and that people are eating. So in particular, things that have limited nutritional value what we often call discretionary food - with high salt, sugar and fat – unhealthy food. It is a combination of people eating too much and people eating the wrong things".

Sigrid Bjerge Gribsholt echoes Bauld by saying that a diet including only a few unhealthy food items could cause vitamin deficiencies and inflict damage on people's health. She quotes a case described in the science magazine Annals of Internal Medicine: a boy suffering from an untreated eating disorder lost his hearing and eyesight by eating only junk food. Though the loss of hearing was not clearly explained, the Dutch academic notes that this could be caused by deficiencies and malabsorption leading to neurological symptoms.

Tracking what you eat is one of the best predictors of weight loss success. And it can take less than 15 minutes a day. Learn more here: https://t.co/sJjG0STH6q pic.twitter.com/iXlpLx1c7w

​According to her, the government plays an important role in both the prevention of obesity and in the treatment of obesity. She notes that specific national strategies "could help people start on or keep having a more healthy lifestyle".

To illustrate her point, Gribsholt outlines one of the ways of promoting a healthy lifestyle could be a change of food taxes. For example, the government may impose high taxes on unhealthy food, and reduce taxes on vegetables. Furthermore, she advocates increased focus on childhood obesity, as well as facilitating biking and walking as transportation.

"In many countries, only few effective treatments are available for most people, which emphasises the need for support of treatments, including lifestyle intervention, medication, and vitamin surgery", the academic underscores.

Obesity Problem in UK: ‘We Believe Liability Here is With the Food Industry’ - Nutritionist

‘Obesity Crisis is Getting Worse’: Study Finds 31% of American Adults Are Obese