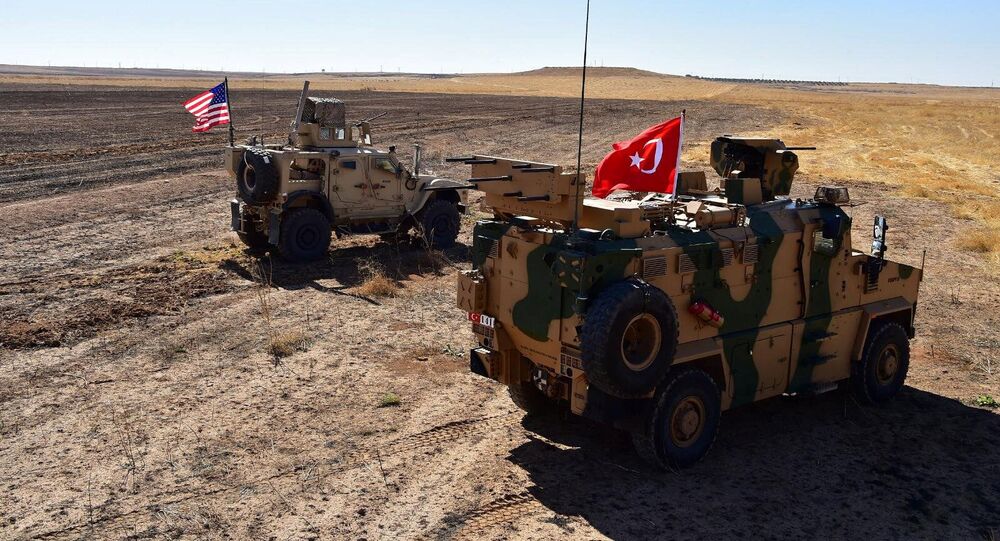 US President Donald Trump has warned Turkey that Washington is ready to impose "powerful" sanctions over its offensive against Kurdish groups in northern Syria.

Trump said in a Twitter post on Sunday that's he's working with both Democratic and Republican congressional leaders to prepare sanctions.

But Turkey is not worried about sanctions Turkish Foreign Minister Mevlut Cavusoglu told German media over the weekend.

Dealing with @LindseyGrahamSC and many members of Congress, including Democrats, about imposing powerful Sanctions on Turkey. Treasury is ready to go, additional legislation may be sought. There is great consensus on this. Turkey has asked that it not be done. Stay tuned!

​"If Turkey was afraid of sanctions, we would not have started this operation. This is a vital national security issue for us", Cavusoglu stressed.

Political analyst and journalist Klaus Jurgens told Sputnik that sanctions should be the last resort and are usually not effective.

Sputnik: President Trump said on Sunday morning that he is in talks with members of Congress to impose "powerful sanctions" on Turkey. In your opinion, what will be is the essence of these sanctions? How destructive could they prove?

Klaus Jurgens: My viewpoint is that sanctions very seldom really work; they should be a last resort. And I think the Trump administration should understand that Turkey is actually faced by a serious terror threat. Now, of course, it is the right of the American partners and administration to withdraw their troops, but then it should not punish Turkey if it actually steps in and tries to create a peace corridor.

So, I do not really understand why they're leaving the territory and then a few hours later, basically saying they would destroy the Turkish economy. I think that would be wrong, in any case completely wrong advice, but I do still hope that Ankara and Washington can come together and find a joint solution to this problem. 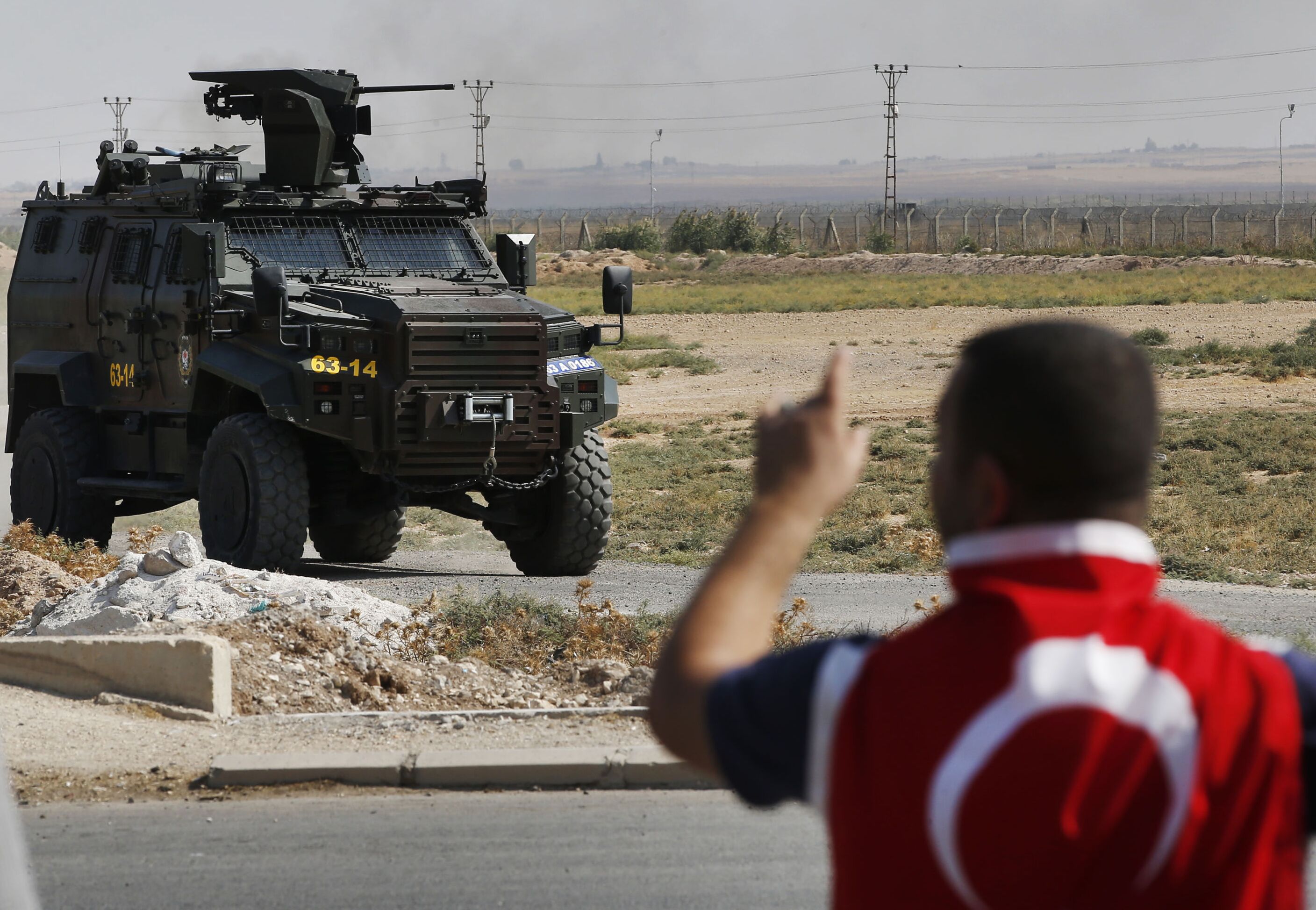 But sanctions do not work. And I think the wording, to be honest, was, diplomatically speaking, totally wrong, as far as "destroying the Turkish economy" in retaliation.

Washington knows extremely well that the YPG are not necessarily neighbours you would invite for a cup of tea. They have a legitimate right, they did help a lot to fight ISIS [Daesh]*, but at the same time, according to many analysts, they're basically an offshoot of the PKK* terror organisation [Turkey blacklisted the PKK as a terrorist group].

So, when you deal with such an organisation you can't just say one day they're good, and the next day they're bad, or vice-versa. But in a nutshell, the sanctions- I hope would never materialise, if they would, it would be wrong politically and diplomatically speaking.

Klaus Jurgens: I think President Trump has to play to his domestic re-election card. You have to basically say: "Let's bring the boys back home. We don't want to engage in any wars or any other activities of this sort outside of our territory".

...I don't know of course, I can't speak for him, but as I said, if he wants to change the previous role of previous precedents, that the United States is seen as the policeman of the world, if he would now say, "The United States should not act like this anymore", this would be very positive, it would be a huge step towards a new geopolitical world, a new paradigm, a so-called paradigm shift, but I honestly think it is basically about the upcoming presidential elections.

He has to show that he is a hardliner on one side, that he defends his military and the safekeeping of these soldiers on the ground. And I think opinion polls in the United States suggest that even the majority of Americans are no longer interested in having Vietnam 2.0 or Iraq 2.0.

Don't get me wrong, and this is not meant cynically, I'm just trying to make a point. I think most Americans would be very happy with "America First", a strong America, but not necessarily American boots on the ground anywhere else.

Sputnik: In his Twitter post, Trump noted that there is a "big consensus" when it comes to these sanctions. In your opinion, how likely is it that the Democrats support the initiative?

Klaus Jurgens: Well, we have to go back to the time of Barack Obama as the president. I mean, he's not entirely, how should I put it? Not responsible for what is actually happening right now in the whole area, in Iraq and Syria. The Democrats and the Democratic Party and the Democratic president didn't necessarily avoid falling into traps to say, "We have to go in, we have to show the American flag, only we can basically bring peace". 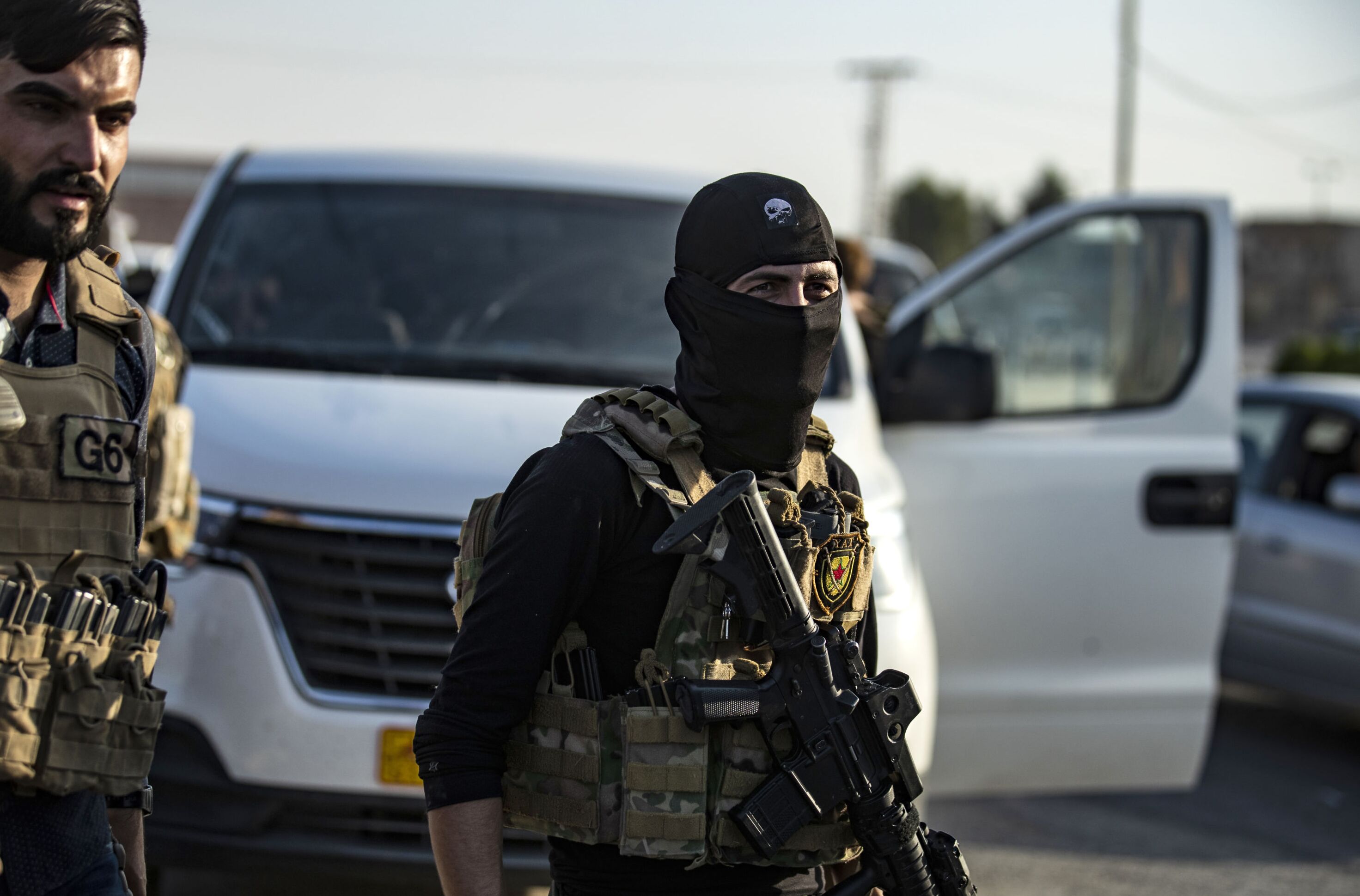 © AFP 2019 / Delil Souleiman
Members of the special forces of the Kurdish-led Syrian Democratic Forces (SDF) are pictured during preparations to join the front against Turkish forces, on October 10, 2019

So, I think that ultimately, when push comes to shove, I think is it positive? Is it negative? That is what our listeners and readers must decide. I think there will be a consensus up to a certain point between the Republicans and the Democrats to say, "We need a strong America, this time we have to support the president, and he is right to bring the boys back". And will they actually impose sanctions, the Democratic caucus on Turkey?

I would not be so certain, and this is why I say I hope that a compromise can still be found, that there will be no sanctions, that Ankara and Washington talk again, talk much more often, and the situation can somehow be solved. But it's a tinderbox, it's a tinderbox down there, it can explode at any second.

Sputnik: On Friday, the Pentagon said that US troops in Syria "came under artillery fire from Turkish positions", while Turkey's Ministry of Defence has denied intentionally shelling US positions. Should we expect tensions between the two NATO allies, Turkey and the US, to escalate?

Klaus Jurgens: My sincere hope is no, and I do not have a crystal ball, but I would say - no. This is what perhaps a number of hawkish lawmakers in the United States would want to see and, perhaps, don't get me wrong, a number of hawkish lawmakers in Turkey vice-versa, that there could be an escalation of words, and that basically, both sides would say we go our own ways.

I do believe what the Turkish military commander has said, that if any such incident would ever have happened, it was totally non-planned, it was an unplanned attack on American interests, or individuals, or troops on the ground. So on this issue, I'm absolutely with the Turkish side. 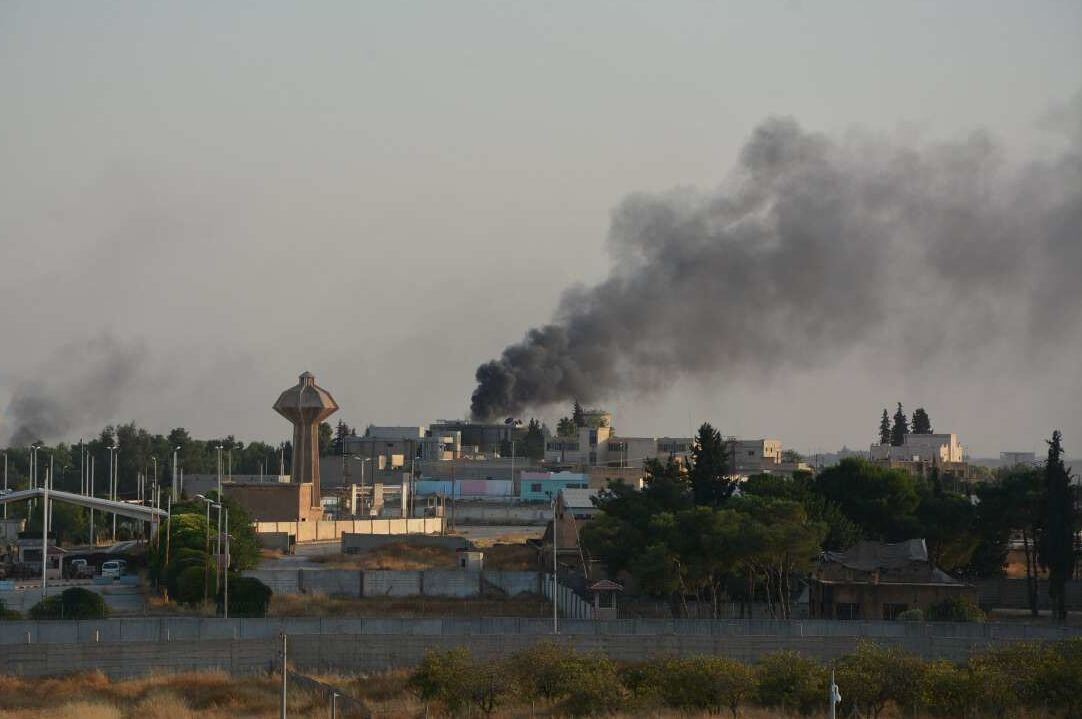 But coming back to the point, I think in both countries some tendencies actually do not oppose populism, do not oppose a quick fix, and do not oppose overnight solutions. Even if (such quick fixes ) don't work out one day later; I hope that the majority of forces actually would like to cooperate... in particular within NATO for the time being and that they will simply say that: there were some misunderstandings, we have to overcome them, but let's sort it out together.

I hope, but as I said, this tinderbox analogy, I am so much worried about two things: A) that the whole situation can explode, and B) what you sent me this afternoon, there were other comments like this as well, what happens to ISIS [Daesh], what happens to those terrorists who are now basically on the loose?

Where do they go? What will the international community do? And I think from Washington, via Ankara, all the way to Moscow, back to Brussels everyone must work together, this is more a political comment than a political science comment, but I'm crazy worried that some people think this will happen for just a few more days, and all will be fine again, but there's a huge potential for terror to be exported to other nations.

Sputnik: Could pressure from the US somehow prevent Ankara from continuing to buy S-400s from Russia?

Klaus Jurgens: No. I think the Republic of Turkey is strong enough by now, has become a well-respected international player and its NATO membership is notwithstanding to operating with Russia on this matter, not at all. And if anyone interprets this as Turkey only looking to the northeast instead of to the west, I think that is wrong.

Sputnik: What steps in relation to Turkey can soon be expected from the Trump administration?

Klaus Jurgens: Well, may I present another analogy, the Brexit analogy, I know it's not the topic, don't get me wrong I'm not talking about Brexit, but you follow events on a daily basis and Monday a statement is issued leading in one direction, and on Tuesday into another, and on Wednesday everybody needs a crystal ball. 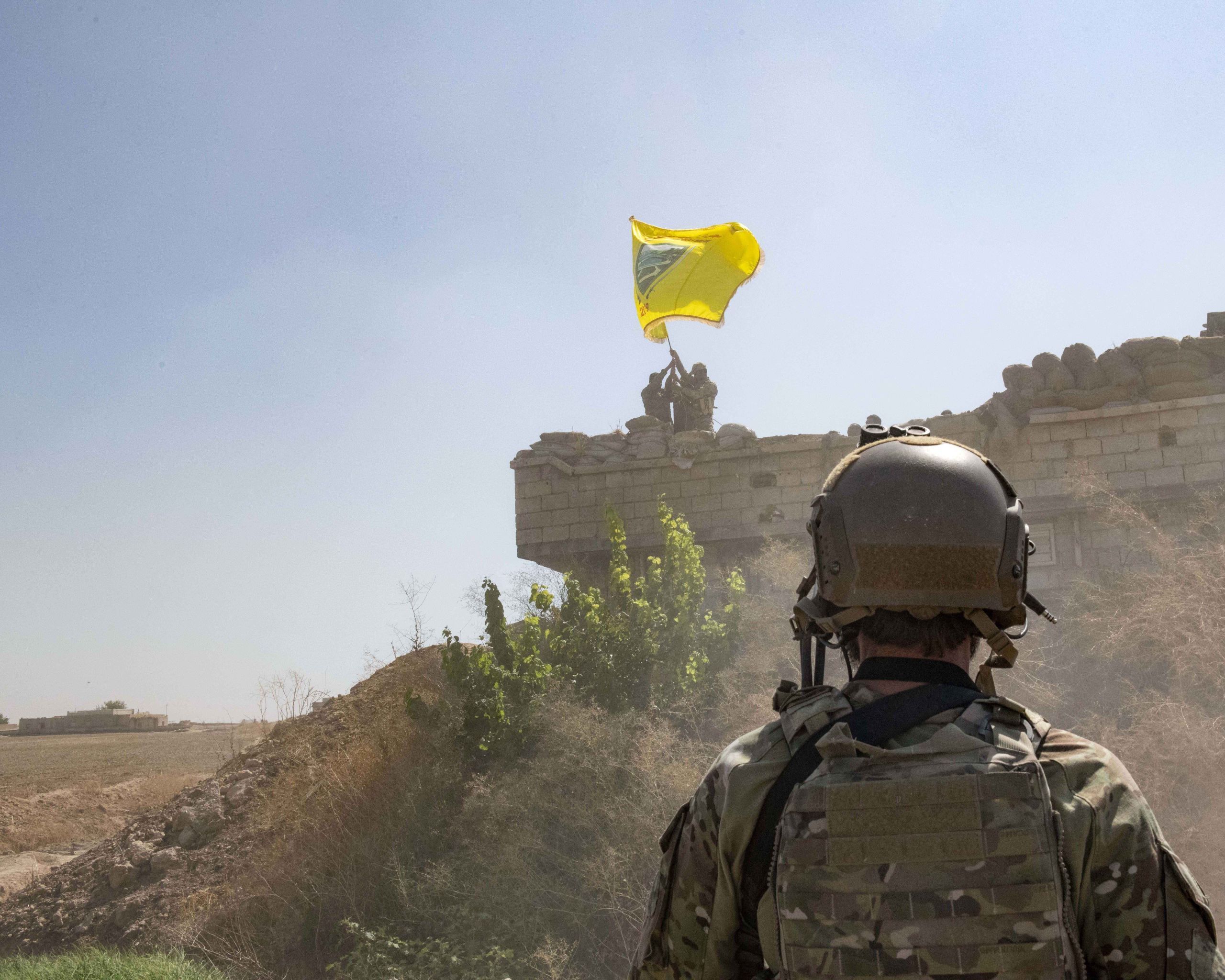 © AP Photo / Staff Sgt. Andrew Goedl
In this Sept. 21, 2019, photo, released by the U.S. Army, a U.S. soldier oversees members of the Syrian Democratic Forces as they demolish a Kurdish fighters' fortification and raise a Tal Abyad Military Council flag over the outpost as part of the so-called "safe zone" near the Turkish border.

My hope and I expect that the same will happen with the Trump administration and the Ankara administration; come time for reasoning, and the understanding that Turkey is actually safeguarding NATO's south-eastern flank, of which the United States is the leading member.

Then (the US could possibly) support Turkey in its effort not to create the threat of a terror invasion on its own soil. The moment NATO understands, and Washington understands that this is a common task, a good cause to prevent this, I think all can be turned around once more. Maybe I'm too optimistic, but I hope.