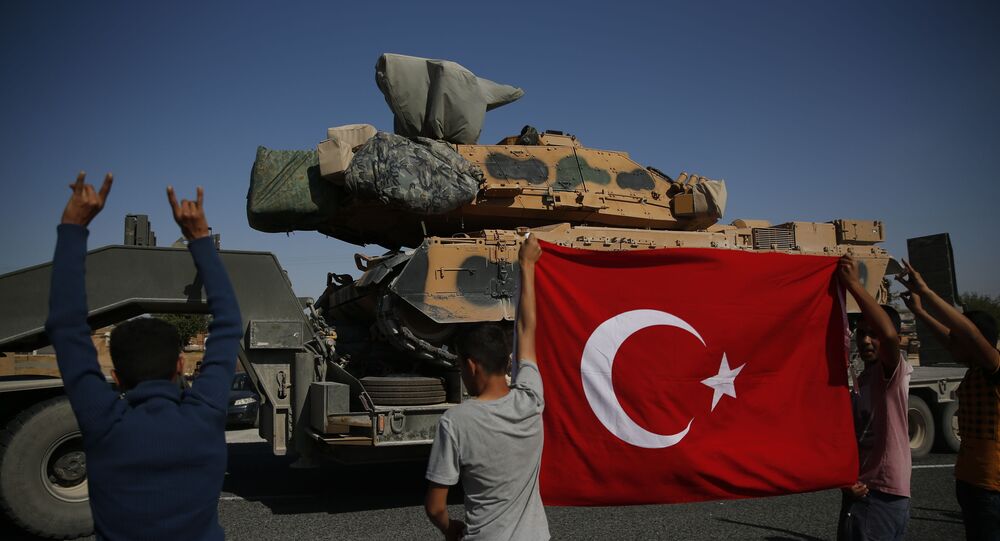 The US President, Donald Trump, has offered three options for how the US should respond to Turkey's "Operation Peace Spring", starting with the military option, then sanctions, to "mediation" between Turkey and Syrian Kurds.

Ali Demirdas, a professor of international relations and contributor to The National Interest shares his view on the issue.

Sputnik: Why, do you think, Trump has changed his harsh rhetoric against Turkey?

Ali Demirdas: Among the American foreign policymaking agencies, the executive office probably is the only pro-Turkish one, despite its inconsistencies.

The Congress and the Pentagon have zero desire to work with Turkey while Trump is a businessman and pragmatic to some extent.

He wants to establish good relations with Turkey (and Russia too), but he is under tremendous pressure at home.

Both aisles of the Congress are heavily influenced by the Greek, Armenian and pro-Israeli lobbies, all of whom want a piece of Turkey. That’s the biggest reason why Congress has always had a sour view of Turkey.

For instance, most Evangelicals and pro-Israeli neocons see a non-Arab, secular establishment (the YPG controlled areas) in Syria vital for Israel’s security in the region.

So, Turkey’s military incursion into that part of Syria is seen by these circles as a blow to Israel’s security. That’s why it is Lindsey Graham, who has a strong pro-Israeli constituent base, that has proposed Turkey’s punishment using the harshest measures.

With the three options, Trump is trying to cater to those anti-Turkish circles. It is difficult to believe that any of what he said in this message will happen.

He is not going to send a large enough number of troops to have a dynamic military presence in Syria because he doesn’t believe in the benefit of being in Syria. Plus, he wants to bring troops back home by the next election as he promised.

There probably will be a few hundred troops staying in northeast Syria to symbolically represent the American presence.

It is highly unlikely that sanctions will be imposed on Turkey either. Last week, Trump praised the Turkish American economic partnership hoping that Turkey will come back to the F-35 program. He is a businessman and wants to sell planes to Turkey.

Imposing sanctions would be difficult since America does not have much leverage left on Turkey.

The Turkish foreign minister Cavusoglu said if sanctions are imposed, they are prepared to take harshest countermeasures.

These could include closing the strategically important Incirlik Base and the Kurecik Radar station, which are vital to monitoring Russia and Iran. Without these in place, Israel’s security is gravely compromised.

As for the Turkey-YPG mediation, it is not possible either.

Turkey has never been so strong against and so close to the militarily defeat of PKK/YPG as it is now. With the Peace process fiasco of 2013-2015 still fresh in the minds of most Turks, another reconciliation attempt is not even a thought for Erdogan.

With the Operation Peace Spring, Erdogan has gained a serious political advantage over his opponents.

His AKP has been in a coalition with the Nationalist Movement Party (MHP) since the 2016 coup.

The moderately nationalist opposition IYI Party, (which split off from MHP) and 39 deputies in the Parliament are expected to join the AKP-MHP alliance (the People’s Alliance-Cumhur Ittifaki) due to the strong pressure from their constituents, especially after the Syria operation.

Before the 2019 mayoral elections, the IYI Party administration decided to be in the anti-Erdogan Nation Coalition (Millet Ittifaki), in which the pro-PKK Peoples’ Democracy Party (HDP) played an important role.

This HDP presence disturbed some of the nationalistic IYI Party constituents. With the Syria operation on the verge of being successful, the IYI Party is expected to join the AKP-MHP Alliance.

While it is still too early, this may allow Erdogan to strengthen his position in the 2023 presidential elections.

However, this doesn’t mean the Syria operation is being held for this purpose. Most Turks believe the operation should have already started early this year when Trump first announced the troop withdrawal.

Sputnik: What real steps do you expect to see from the American side given Recep Tayyip Erdogan's planned visit to the US in November?

Ali Demirdas: The Operation Peace Spring is expected to continue in phases. It is possible that the first phase will continue until Erdogan’s visit to America on 13 November.

So, until then, the Turkish military wants to complete the capture of the strategic [Tel Abiad-Ain Issa] - [Rasulayn-Tal Amr] rectangular pocket that would effectively cut the YPG controlled Syrian territory in half, severely crippling YPG’s ability to provide logistics from Iraq.

The military success on the ground will give Turkey leverage in the Washington visit.

The US is really not in a position to resist Turkey’s demands.

Turkey has made it clear that it is serious about Syria and for America, it is not really worth escalating the situation to the point where American soldiers come in contact with Turkish soldiers, leading to an unpredictable spiral.

Erdogan has displayed a political mastery of balancing the US with Russia. It has helped both Turkey and Russia to become more influential in the Middle East all the while rolling back America’s influence.

Therefore, with the Turkish soldiers having already crossed into northeast Syria, which the Pentagon and PKK/PYD thought would not have been possible, Turkey is likely to gain more concession in Washington in November.

Sputnik: Erdogan has expressed hope that they will discuss the deliveries of US-made F-35 fighter jets to Ankara that were jeopardized due to Turkey's decision to purchase Russia's S-400s. Do you think that the operation may cause Washington to completely reject the F-35 deal with Ankara, in addition to other potential punitive measures?

Ali Demirdas: I don’t expect that the operation will result in Turkey’s complete ejection from the F-35 program.

Turkey bought the S-400s despite serious threats from Washington, then Lindsey Graham told Erdogan earlier this month that he would like to see Turkey back to the F-35 program.

Trump too wants to sell Turkey jet fighters. So, America’s threats about F-35 appear to be really empty bluffs. Please refer to my article, in which I covered why America wants Turkey back to the F-35 program so much.

One last thing. When Turkey held Pastor Brunson on terror charges, Trump’s imposed tariffs on steel and aluminum and it jolted the Turkish economy.

Turkish Lira plummeted against Dollar. But, when Trump tweeted last week, he would destroy the Turkish economy, nothing bad happened to the economy.

Even after the operation began, the TL-Dollar parity hasn’t changed. It indicated Trump is unwilling to move with punishment and Turkey is more ready financially against this kind of trouble.