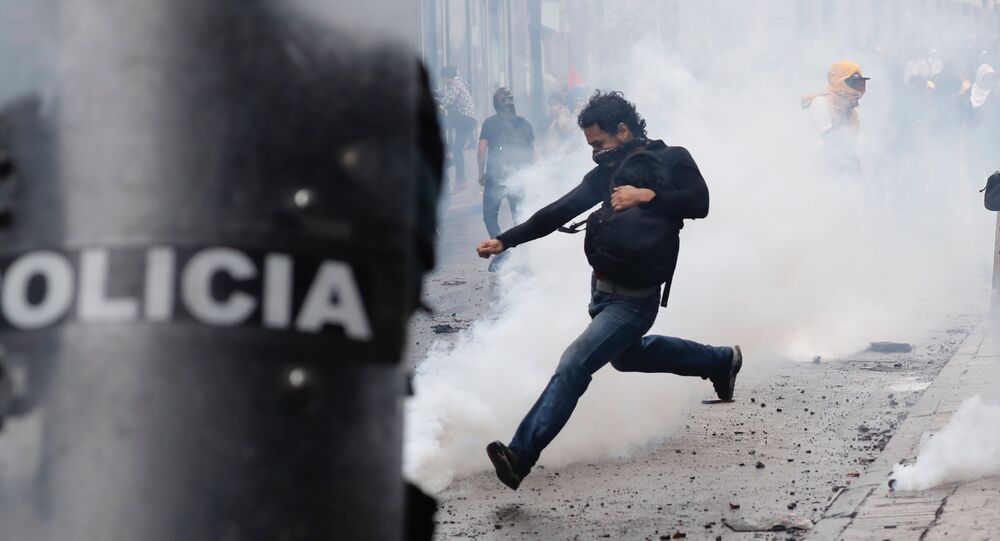 Lenín Moreno has accused his Venezuelan counterpart Nicolas Maduro and his own predecessor Rafael Correa of organising a coup. On 8 October, a curfew was imposed from 8 pm to 5 am.

Sputnik spoke with one of the nation's indigenous leaders, Tuntiak Katán, who explained the demands of the protesters, and journalist Giovanna Tassi, who analysed possible scenarios for the development of the crisis.

In spite of the fact that President Lenín Moreno accused his predecessor Rafael Correa of inciting protests and called for dialogue with the indigenous movement, a national strike was scheduled on Wednesday 9 October.

“This is a strike of students, workers, women, senior citizens, and other sectors of the population. The announced economic measures affect all sectors, the countryside and the city. We will carry out mobilisation within cities and in the province. At present, all ground transportation routes are closed. Major cities will be under serious pressure,” assured Tuntiak Katán, the vice-president of COICA (Coordinator of the Indigenous Organisation of the Amazon River Basin).

The indigenous leader questioned the legitimacy of Moreno’s refusal to revoke a controversial decree that exempts fuel prices from state control and accused him of lacking self-criticism.

“Accusing Correa of a coup is a mediocre way out of the situation. A true leader should not blame the previous leadership, although the Correa government showed some irresponsibility. The slogan of our communities is “Neither Correa, Nor Lenin”. We fear for the fundamental rights of our brothers. The state of emergency declaration is cowardice on the part of the incumbent president. The president considers us to be criminals, vandals, deadbeats, and all these derogatory terms do not contribute to peace between us,” Katán added.

For her part, journalist Giovanna Tassi reported on the level of persecution of protesters in the streets (which the mainstream media do not cover) and pointed out the role of the indigenous movement in the protests.

“The Confederation of Indigenous Nationalities of Ecuador (CONAIE) has declared a state of emergency on its territory as the Constitution recognises the territories of the indigenous population. They captured military and police officers in their communities, who were subsequently returned to their units without a single scratch. This is very symbolic. As for the casualties, there is a man who was crushed in the south of the country, and a 26-year-old man who, after escaping from the police, fell from a bridge; there is another person in serious condition. That is because the police use pneumatic weapons,” she said.

“The military has carte blanche for any action”

According to journalist Giovanna Tassi, the task of journalists has been made complicated by the state of emergency and recognised that “information cannot be received now with complete freedom”.

“They subjugated the media: the military has carte blanche for such actions in the state of emergency. The traditional media are under Lenin’s authority, so nothing seems to be happening for them. But there are alternative media and social media that provide information, because extremely harsh repressions are being used against protesters. Guayaquil is the most convenient place for Moreno because all the business circles are there, and he can calmly sit and watch what happens while the military and police carry out the suppression,” she explained.

In the meantime, COICA's vice president expressed concerns about what might happen this Wednesday during the general strike:

“The Minister of Defence said they will use not only non-lethal weapons but also all the forces of the army to control the situation. This is an irresponsible statement; this is a war against the people themselves. An army pointing deadly weapon (at people) is a damned army,” he said.

“For the first time in history, the indigenous population intends to storm Guayaquil”

Giovanna Tassi claims that “since Lenín Moreno left for Guayaquil, this is the first time in history that indigenous population wants to storm this city. Mayor Cynthia Viteri is already furious. What could happen? It's hard to know for sure. History shows that the Indians don’t leave until they achieve what they want, and what they are asking for now is Moreno’s resignation. Perhaps Lenin will resign and Vice President Otto Sonnenholzner, the alleged son of a banana tycoon, and former presidential candidate Jaime Nebot, will take his place. Moreno has the support of economic groups, the Armed Forces, Washington and the Social Christian Party (PSC)”.

In turn, the leader of the indigenous peoples of the Amazon listed the most urgent requirements of the movement led by him:

“In addition to breaking the agreement with the IMF, we want to stop the wave of concessions for oil and mining companies in the Andes and the Amazon. The government is distributing territories and natural resources to influential players. There are labour law reforms, tax and other reforms that are beneficial only to an economically significant group and cause harm to all other members of society. The decree announces a rise in fuel prices at the national level, which directly affects the food basket of all Ecuadorians. Therefore, we protest,” Katán said.