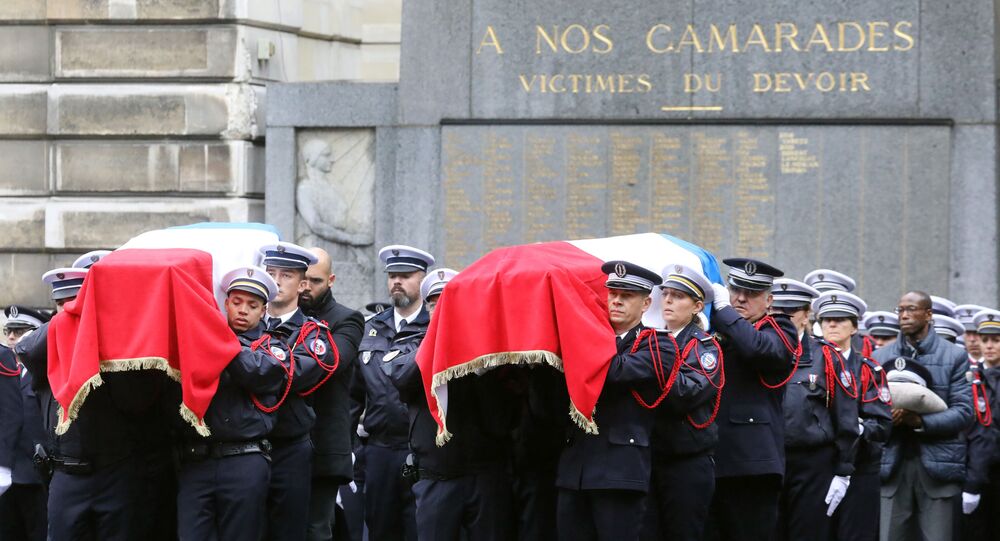 The profile of Michaël Harpon, who killed four his colleagues at the Paris police headquarters on 3 October, raises the debate on the dangers of Islamist radicalisation.

Despite the fact that Harpon’s bosses knew about his statements regarding the terrorist attack on Charlie Hebdo in 2015, Harpon continued working in the prefecture and had access to classified information. After the incident, can we say that the French authorities are not taking the problem of Islamic radicalisation seriously enough?

Sputnik: How can one explain that despite several reports from his colleagues concerning Michaël Harpon’s radicalisation, no thorough investigation was launched against him, and he managed to retain his position and access to classified information?

Bassam Tahhan: For a long time there has been a major dysfunction in the work of public services. So far, France has taken no sufficient measures to properly analyse the manifestations of radical Islamism in the country. We need to look at the root of the problem. Too many factors have been neglected, especially in relation to foreign policy. For example, our intelligence services don’t want to work with their Syrian counterparts. Yet it is in Syria that there is the greatest concentration of jihadists in the world, in Idlib for example. This can be regarded as a manifestation of pride – France doesn’t want to admit that the country itself and its allies have lost in Syria. Moreover, Paris is often opposed to Russia, Iran or Damascus intervening to the fight against Islamism in Syria.

Sputnik: You say that too many French anti-terrorist experts are not competent…

Bassam Tahhan: Yes. There is also a major problem regarding the analysis of Islamist terrorism in France and internationally. In France, the real experts are scarce. Forgive the expression, but many quacks exercise in this area. Just look at former advisers to the Ministry of the Interior, the Prime Minister or the Elysee who express themselves on issues related to Islam in the media. There is a lack of competent experts. Remember the way the authorities were hiring these so-called experts to fight radicalisation in deprived neighbourhoods. They were often hired because they bore Arab names, and not because they were competent. In general, the whole French policy with regard to Islam should be questioned. The number of Islamist attacks in recent years in the country is there to testify. In the event of a tragedy, the authorities always find a reason to shirk their responsibilities.

Sputnik: Do you think that a tragedy like that of the Paris police headquarters can happen again?

Sputnik: How do you assess France’s domestic situation?

Bassam Tahhan: Economically speaking, France is going through some very hard times. Bonds and values are collapsing. In this context, part of the vulnerable segments of the population is looking for an alternative value system, and there is a risk of succumbing to the temptation of radical Islam. For several decades, the French authorities haven’t given due attention to the numerous manifestations of religious fanaticism among the population. For example, no one ever banned foreign preachers from freely disseminating their radical views in mosques. Perhaps France wasn’t ready for such a large percentage of Muslims in the country. Today, Islam is the second religion in the country. This raises certain questions, especially related to the current international situation.

Sputnik: That is to say?

Bassam Tahhan: For example, there are those who are ready to convert to radical Islam out of solidarity with the Palestinians. And we haven’t yet found a solution to all these problems. Everything that has hit the Muslim peoples in the world can cause radicalisation. We have already seen this during the war in Iraq, which resulted in millions of dead and the appearance of Daesh*. Then the war in Syria began.

Sputnik: So, you think this situation is partly related to France’s foreign policy…

Bassam Tahhan: The Elysee received the opponents of Assad, and representatives of the Muslim Brotherhood movement, and this was in the name of democratic intervention in the process of regime change in Syria. It’s unacceptable. France acted as an ally of the allies of the Islamists.

Sputnik: According to the French Minister of the Interior Christoph Castaner, Michaël Harpon talked to the Salafists. Who finances the Salafists in France?

Bassam Tahhan: They have several sources of funding. The Turkish source is Recep Tayyip Erdogan. The international Muslim Brotherhood Bank, the Gulf countries, also finance them. Finally, they are directly sponsored by organisations such as Al Qaeda, which still has funds. It should be added that France understands very poorly what Salafism is and that it hasn’t stopped developing over the past 40-50 years. Today it’s very difficult to turn to history and realise how exactly foreign preachers appeared at the head of French mosques. France lacks competent experts on Islam.

Sputnik: What role do theologians play in Islam?

Bassam Tahhan: Too often they act as mentors, explaining how to become “a good Muslim.” They don’t have a critical approach to religion or to writing. This is a huge problem, and it’s partly the cause of radicalisation.

Sputnik: How can radicalization be effectively combated in France?

Bassam Tahhan: It’s necessary to hire competent experts, and create tools that will immediately take measures against suspects in radicalisation, especially if they hold important posts.  The other day there was a tragedy in the Paris police headquarters. And tomorrow it can happen anywhere. I have repeatedly mentioned the cities I came up with – Idlib-on-Oise (Idlib-sur-Oise) or Idlib-on-Seine (Idlib-sur-Seine); this way I wanted to draw public attention and encourage people to be vigilant. The French authorities don’t impede the development of radical and Salafist movements. But it’s necessary to fight them at all levels – both at school and the Ministry of Internal Affairs. After 9/11, the US administration demanded an additional 8,000 vacancies for Arabic-speaking employees. Until Arabic is taught in French public schools, private and religious organisations will continue to do so. And among them, there are institutions that keep in touch with the radicals. I myself taught Arabic and dealt with Salafi colleagues who refused to say the words “whiskey” or “wine” in the classroom. I drew attention to this, and they were removed from office. This proves that one can act. It’s hard to understand why the French secret services, which have substantial funds, are unable to restrain this movement.