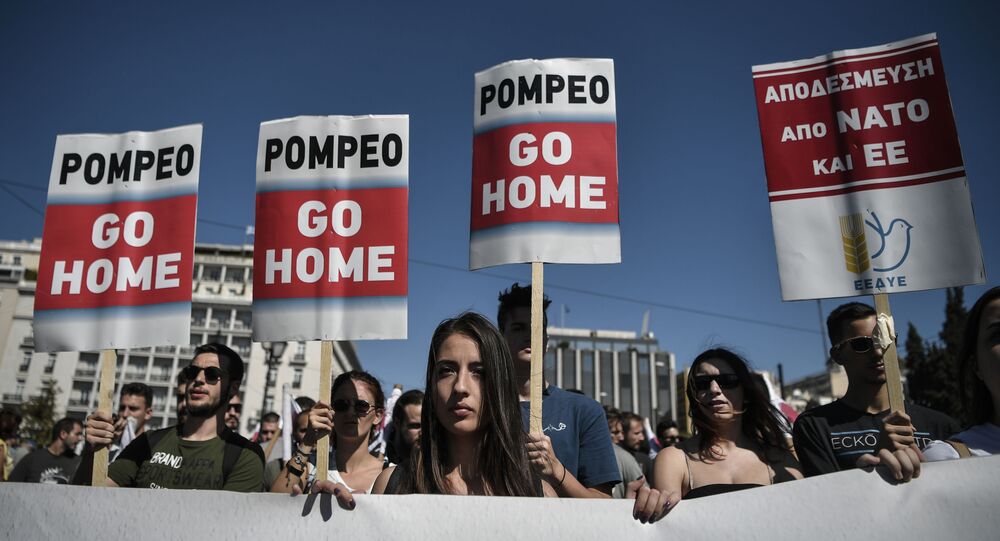 Pompeo’s Visit to Greece: “Souda Bay Is No Longer in the Hands of the Greeks” – Expert

On Saturday, 5 October, Greek Foreign Minister Nikos Dendias and US Secretary of State Mike Pompeo signed an updated defence agreement, which extended the American use of the Souda Bay base on the island of Crete “for an indefinite period.”

On Saturday, during US Secretary of State Mike Pompeo’s visit to Greece, the Protocol on Amending the Mutual Defense Cooperation Agreement (MDCA) was signed.

Greek Foreign Minister Nikos Dendias announced deeper strategic cooperation between the US and Greece after the signing of the agreement.

However, some experts argued that the updated agreement is “unconstitutional.”

“Everything was exactly as we expected. The most important was the provocation that we saw both from Pompeo and from some Greek officials serving specific interests,” Dimitris Pantelis, associate professor of philosophy at the Polytechnic University of Crete and a member of the international research group Logic of History, said.

You can see the facilities on the territory of the US Souda Bay military base from the building of the Polytechnic University of Crete, where Mr. Pantelis works; the expert notes the fact that “this territory is no longer in the hands of the Greeks.”

“In fact, it was never in the hands of the Greeks, but now the Americans have unlimited possibilities in this region,” he said. “The use of bases has been extended indefinitely. NATO forces have unlimited authority to use bases in the Souda Bay, Alexandroupoli and Stefanovikeio. We now have a serious problem in the form of an occupying army with an extensive infrastructure network for unlimited use and the significant consequences of this.”

At the same time, Pantelis mentioned that with the signing of an updated defence cooperation agreement, Greece could become “a bait” for NATO’s opponents.

“Strengthening and expanding NATO’s infrastructure in such an explosive situation of the ongoing “world war” means that the country can become a target for NATO’s potential rivals,” he said.

According to Pantelis, this whole strategic ideology of “protecting” the national interests of the NATO member states is "nonsense".

"Turkey was very well-liked when it served NATO’s strategic interests. Even when Greece turned to NATO and the EU for help in resolving the Greek-Turkish conflict, they said these were bilateral issues. They said they had nothing to do with the problems of bilateral relations. The truth is that Greece cannot find protection in these organizations, they are not alliances, but institutions with vassal dependence,” Pantelis said regarding Pompeo’s statements and US condemnation of Turkey’s actions in the Eastern Mediterranean.

© AFP 2021 / COSTAS BALTAS
U.S. Secretary of State Mike Pompeo (L) and his wife Susan wave as they board their plane to depart from Eleftherios Venizelos International Airport in Athens, on October 6, 2019 as part of Pompeo's four-nation tour of Europe.