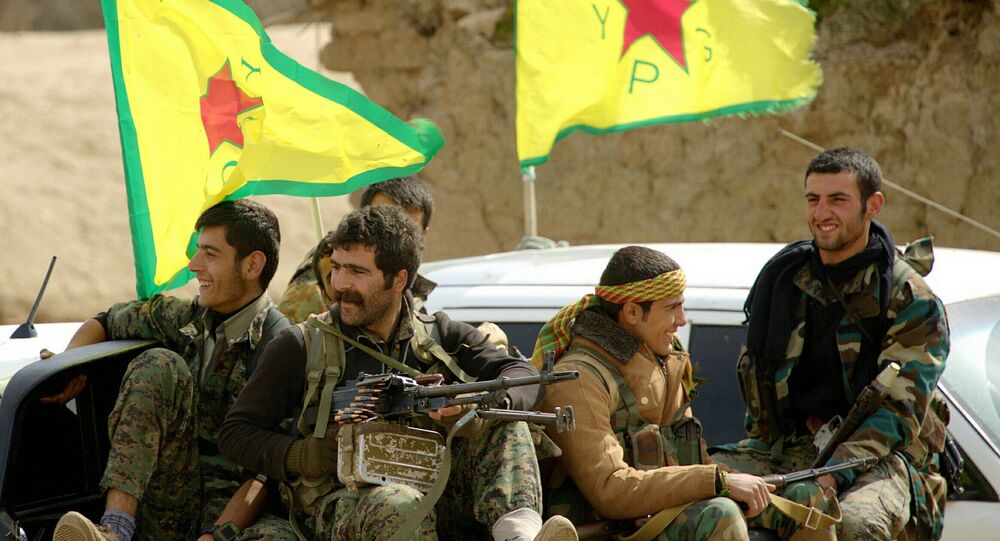 The Turkish armed forces reportedly launched an attack on Kurdish forces in eastern Syria on Monday, just hours after US troops withdrew from border areas. However, a former diplomat to Syria said that while Damascus can’t come to the rescue, Turkish control will be limited in the east, and the US exiting the war simplifies the issue.

Peter Ford, the former British ambassador to Syria, told Radio Sputnik’s Loud and Clear Monday that from statements by US officials, it is not yet clear whether the US will totally withdraw from northeastern Syria, or just a 20-mile-wide strip bordering Turkey in the north. “We may be seeing all this hyperventilating over a territory just one-fifth what is currently, effectively, occupied by the US forces.”

Turkish President Recep Tayyip Erdogan has said his country’s primary concern in this border area is to create a “safe zone” 20 miles deep, 300 miles long and depopulated of Kurds in which “we may have a chance to resettle about 1 to 2 million Syrians,” establishing a buffer zone separating Kurdish groups in Syria from those across the border in Turkey, both of whom Ankara regards as terrorist organizations.

“This is based on very little evidence, and the Kurds would be very foolish to do this, but whatever. The Turks do feel a need to have a comfort zone 20 miles deep into Syrian territory,” Ford noted.

This isn’t the first time Turkey has invaded Syria. Between January and March 2018, Turkish forces besieged the northwestern city of Afrin, then held by the Kurdish-dominated Syrian Democratic Forces (SDF), as part of the ironically named Operation Olive Branch. During the siege, Kurdish and pro-Damascus forces reached an accord that saw pro-Damascus forces enter Afrin to defend the city from the Turks. However, the full power of the Syrian Arab Army (SAA) was never brought to bear, and Turkey and its allies in the al-Qaeda dominated Free Syrian Army (FSA) seized Afrin that March, completing a belt of territory under their combined control that stretched through Idlib as far south as Hama Governorate.

After the operation, Erdogan sought a second offensive toward Manbij, which also housed US forces, and Washington promised swift retribution if Turkish actions caused US deaths. An all-out clash was only narrowly averted in September 2018, when Russian President Vladimir Putin brokered talks with Iran and Turkey to create a de-escalation zone around the territory. An SAA offensive this past August captured the city of Khan Sheikhoun, making the first substantial gains against the Turkish-FSA pocket in nearly two years.

That December was the first time US President Donald Trump announced US troops would withdraw from eastern Syria, once Daesh was defeated there - an event that transpired this past Spring.

However, once it became clear that Turkey would rush to fill the gap left by Washington, Kurdish commanders quickly flew to Damascus, burying the hatchet with Syrian President Bashar al-Assad once more.

But the SAA won’t be coming to the rescue this time: Ford pointed out that the closest Syrian forces to the imperiled Kurdish areas are separated by about 80 miles of US-controlled territory.

However, Ford predicted Turkey’s plan wouldn’t stabilize anything in the border area. “We’ll then have a new unstable seam line being created at that 20-mile point, that will just be another area of friction, which will just move south. And it is quite likely that the Kurds will attack the Turkish forces in the ‘comfort zone,’ which will become a new flashpoint,” he said. “The whole thing is crazy.”

Ford didn’t think Erdogan’s proposed resettlement of Arab Syrian refugees in the “Safe Zone” would work, either. “Simply decamping a million people who are not from that area in the first place and dumping them on the current inhabitants - especially bearing in mind that most of the refugees are Arabs, while most of the inhabitants are Kurds - this is going to cause a lot of friction and it amounts to - not ethnic cleansing, but ethnic reconfiguring,” he said. “I have my doubts as to whether it will happen at all.”

However, it will serve Erdogan’s domestic ends, proving that he is acting to address Turkey’s internal problems, including the millions of Syrian refugees who fled the civil war, which began in 2011.

That said, an end to the civil war is now in sight, and a new, 150-member Syrian constitutional committee recently announced at the UN General Assembly will include Kurdish representatives, Ford noted. After SAA forces move into the east, the issue of the border areas will once again become a bilateral concern for Damascus and Ankara to solve.