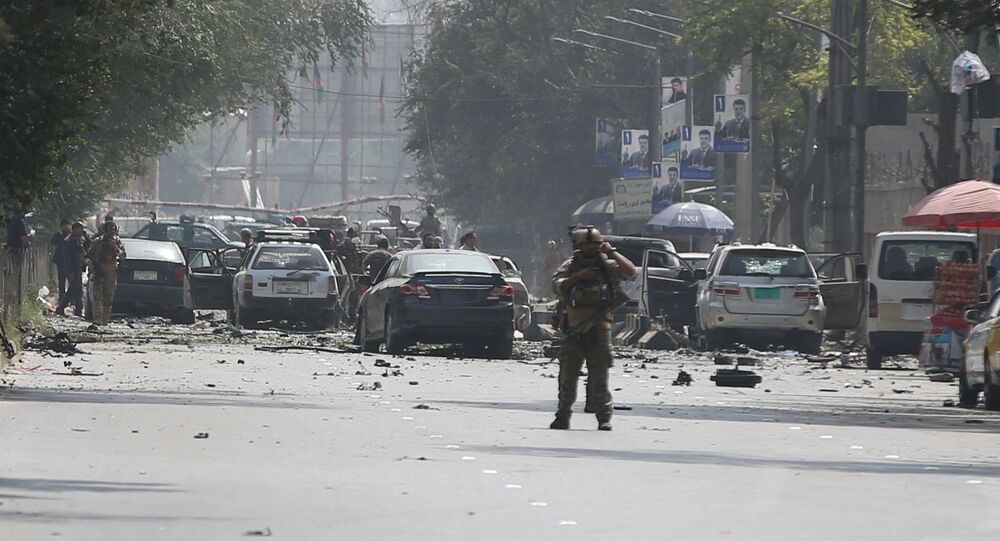 In a recent development in the Afghanistan conflict, a Taliban delegation reportedly met with the US special representative for Afghanistan in Pakistan's capital of Islamabad on Thursday, spawning discussion over whether the suspended peace talks will enjoy a fresh start.

Hardly had Pakistan and the Taliban agreed to resume the Afghanistan peace process with the US, which was put on hold after the death of a US soldier in a Kabul attack, when media reports emerged of a US representative meeting the group to negotiate Afghan reconciliation.

According to Hasan Abdullah, a political analyst and expert on Islamic militancy, Pakistan has long been considered a possible mediator, as it has maintained close ties with the Taliban. “Pakistan believes that there cannot be a purely military solution and the Taliban have to be part of the process in Afghanistan”, the analyst says.

He suggests, that many in Washington have come to believe that Pakistan is the only regional actor with enormous leverage over the Taliban, arguing that it “holds certain sway” over the group. Meanwhile, the Taliban apparently thinks that a good relationship with Pakistan lends it “a degree of edge and legitimacy”, Abdullah details.

In a bid to obtain a strategic “edge against the US”, the group has been going to great lengths to garner maximum possible support from a variety of countries, apparently assuming that those countries may have their own “diverging” interests vis-à-vis the US, the analyst continues.

“This way it feels it could try to isolate the Kabul government - an administration it repeatedly calls ‘a US puppet regime’ and refuses to talk directly with”, Abdullah argues, suggesting that the Taliban’s leadership also seems to realise that there is no point in fighting for the sake of fighting, but that there should be some concrete political goal to work towards.

Another analyst, Arif Rafiq, the president of Vizier Consulting, a New York-based political risk advisory company, and a non-resident fellow at the Middle East Institute, has similarly referred to “a regional consensus” over the urgency of a political settlement with the Taliban – “to prevent further instability in a region threatened by al-Qaeda and ISIS [Daesh*]”.

“The Taliban is leveraging this regional consensus in order to sustain support for a diplomatic process that will grant it legitimacy and some degree of power”, the analyst argues, expressing certainty that the US-Taliban talks are likely to resume in the coming months if the Taliban agrees to some concessions, namely the release of Western hostages.

“That will allow Trump to save face and say that he [is] allowing the process to resume because he has secured the freedom of Western hostages”, he rounded off.

Per Hasan Abdullah, some Taliban commanders in Afghanistan whom he talked to said “that they had been pursuing the peace talks sincerely and it was the US president who abruptly pulled out of the talks”. Abdullah continued to argue that many Taliban commanders believe there is a certain division in the US administration over the peace process in Afghanistan – “because of some vested interests there, including some large corporations that are more concerned about their profits than any perceived US national interest”. He also assumes that the commanders believe the US will end up as the ultimate loser, while the Taliban “can keep fighting for another decade or longer”.

Commenting on the Thursday meeting, Umer Karim, a visiting fellow at the Royal United Services Institute, a London-based think tank suggests that it gives the Taliban “a window to meet US representatives outside Doha”, arguing that despite the fact that there is no formal restart of the peace talks, the sides appear to have engaged in informal negotiations.

This is the first reported contact between the Taliban and Washington after the last round of negotiations in Doha finished on 1 September. The Taliban subsequently warned that the Americans "will suffer more than anyone else" for their decision, claiming that it would lead to "further losses of US lives".

Trump responded by stating that after the breakdown of the negotiations, the US military hit the enemy "harder than they have ever been hit before and that will continue". However, no additional troops have been sent to Afghanistan, with Karim noting that the situation on the ground hasn’t changed, which leaves only one possibility open – that of a peaceful dialogue.

In the meantime, the movement has clashed with the Afghan government across the country. At least 32 people were killed in over 30 separate attacks during the presidential elections in Afghanistan, which the Taliban refuses to recognise, stating that the authorities in Kabul are under the control of Washington.

Per analyst Arif Rafiq, the uncertainty over the national elections may lead to “a power vacuum in Kabul” that could prevent a domestic Afghan dialogue from taking place.