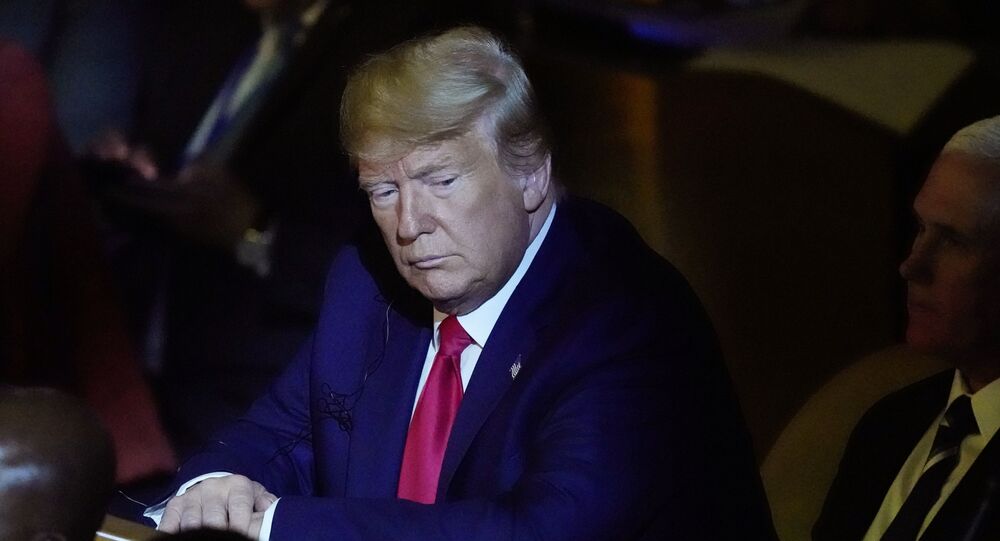 It is not the first time that the US intelligence community has gone after an elected American president, says the Executive Director of the 'Ron Paul Institute for Peace and Prosperity' Daniel McAdams, referring to repeated attempts by FBI and CIA officials to undermine Donald Trump and his team.

On 30 September, Dr Ron Paul, an American author, physician and United States presidential candidate in 1988, 2008, and 2012, questioned whether the recent impeachment inquiry announced by House Speaker Nancy Pelosi was nothing short of a CIA coup.

"It may appear that the Democratic Party, furious over Hillary Clinton’s 2016 loss, is the driving force behind this ongoing attempt to remove Donald Trump from office, but at every turn we see the fingerprints of the CIA and its allies in the US deep state," the retired politician wrote in his weekly column.

According to Dr Paul, one could notice a clear pattern in an August 2016 op-ed by former CIA Acting Director Mike Morell accusing Trump of being a "Russian agent" and former CIA director John Brennan's labelling the US president's behaviour during the talks with his Russian counterpart as "treasonous" in July 2018.

However, Special Counsel Robert Mueller's two-year long investigation found no evidence of collusion between the Trump campaign proving Morell and Brennan's claims to be false. Likewise, the recent complaint by a whistleblower, who is believed to be an intelligence agent assigned to the White House, has triggered controversy, especially given that he or she "was not a direct witness to most of the events described."

The complaint raised suspicions that the intelligence community deliberately changed the rules so that the whistleblower could submit his report.

Records show that the intelligence community quietly revised the formal whistleblower complaint form in August 2019. Eliminating the requirement to have direct, first-hand knowledge of perceived wrongdoing. Coincidence? Here is the original form prior to the August 2019 revision. pic.twitter.com/vGNSJ0Cnqt

​On 30 September, the Office of the Inspector General of the Intelligence Community (ICIG) refuted the assumption. Having cited the form saying "in order to find an urgent concern 'credible', the ICIG must be in possession of reliable, first-hand information", the ICIG further claimed that actually "there is no such requirement set forth in the statute."

And this is happening to a US President ... what about you and I? https://t.co/bxoZgrpGPq

​The ICIG statement triggered the firestorm on Twitter with some social media users outlining obvious contradictions between the whistleblower's narrative and actual transcript of the Trump-Zelensky conversation cited by the complainant.

Now up to 5 major falsehoods in the memo, documented below 👇 https://t.co/Ii3TaTIBTH

​Executive Director of the 'Ron Paul Institute for Peace and Prosperity' Daniel McAdams believes that the handling of the whistleblower's complaint appears to be fishy. He presumes that the intelligence community and deep state's interests are at play.

Sputnik: What's your take on Dr Paul's assumption of a possible "CIA coup" against Donald Trump? How did it happen that the US Intelligence Community (IC) decided to go after the elected president of the US?

Daniel McAdams: It’s not that unusual for the US intelligence community – an integral part of the “deep state” – to “go after” an elected president. In fact there is plenty of evidence that the CIA had its fingers deep into the assassination of President John F. Kennedy. If you look at all of the figures around the early stages of “Russiagate” and the larger attempt to deny Donald Trump the office to which he was elected, you will find current and “former” members of the US intelligence apparatus at every turn. Former CIA Director John Brennan has been extremely active both above and below ground trying to undermine the legitimacy of the US president, falsely accusing him of being a traitor for meeting with Russian president Putin. Other members of the US intelligence community like former acting director Mike Morell and former FBI Director Comey have also been active in trying to undermine and remove President Trump.

Sputnik: On 27 September, The Federalist broke that the US intelligence community secretly nixed the requirement of first-hand whistleblower knowledge in a “Disclosure of Urgent Concern” form. In response, the Office of the Inspector General of the Intelligence Community (ICIG) released a statement Monday insisting that the requirements had not undergone any changes. It further noted that although the whistleblower in question had not possessed first-hand knowledge about most of the events happened, "the ICIG did not find that the complainant could 'provide nothing more than second-hand or unsubstantiated assertions." Was The Federalist completely wrong to raise the alarm? Was the ICIG's decision to regard the complaint as "credible" justified, in your opinion (especially given that the whistleblower presented a distorted narrative of the Trump-Zelensky call)?

Daniel McAdams: There are plenty of problems with the Inspector General of the Intelligence Community’s statement. Frankly it makes no sense at all. On one hand it says that the “whistleblower” was handed the proper form explaining the rules, which included the requirement that the information be first-hand. But then in his statement today he contradicts himself, saying that it was no such requirement. Even though it’s right there in his statement! He said that it was possible that some could read the form incorrectly and conclude that first-hand information was required so the form was changed to read that hearsay and second-hand information was also acceptable. Then he claimed the forms were not changed. Something fishy is going on and the IGIC’s statement does not clear the water but makes it far more murky.

Sputnik: What do you think about the timing of the impeachment operation spearheaded by the Dems? Is it mere coincidence that it was kicked off amid AG William Barr/John Durham's probe into the FBI/CIA/DOJ's handling of the 2016 investigation into the Trump campaign's alleged ties with Russia and IG Michael Horowitz's inquiry into the supposed FISA abuse by FBI/DOJ?

Daniel McAdams: The timing of the impeachment operation is not necessarily tied to Horowitz’s inquiry. In fact there is every reason, based on his past practice, that Horowitz will give a “pass” to wrongdoing as he did with Hillary and Comey. This is just “Russiagate” 2.0. The Democrats and their allies in the deep state are determined to overturn the will of the American people and remove an elected president for phoney charges. This is the real lesson of decades of US deep state-led regime change operations overseas: sooner or later when those with power decide that the American people have chosen the “wrong” person they will spring into action. President Trump, for better or worse, is just not one of “them” so they are determined to get rid of him. Sadly, America is looking more and more like a banana republic.

The Hidden Story Behind Impeachment

Impeachment Nonsense: All Democrats Want is to Hurt US, With Only 2020 Election in Mind - Trump