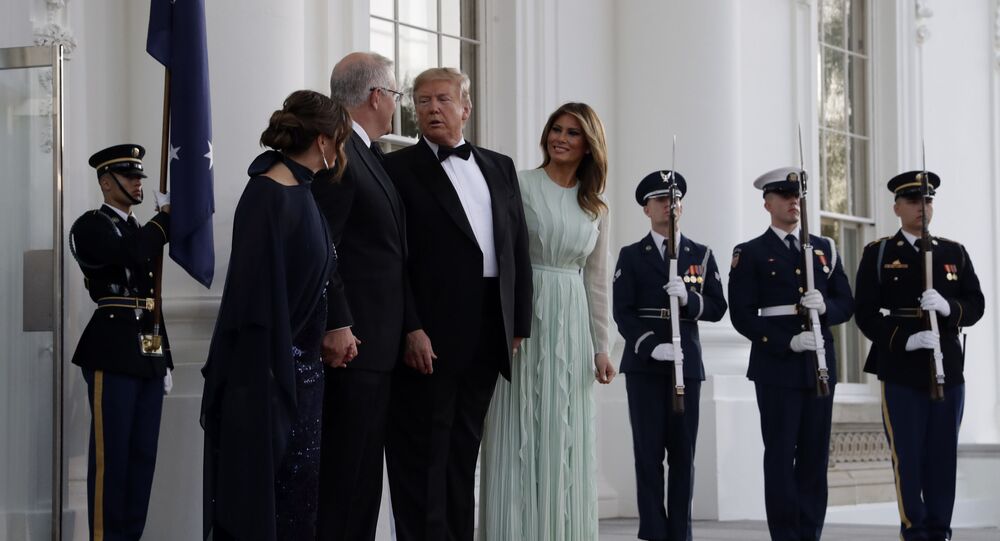 On Monday, The New York Times presumed that Donald Trump had manipulated Australian Prime Minister Scott Morrison into "discrediting" Special Counsel Robert Mueller's investigation, adding to the fuss over the Trump impeachment inquiry. American and Australian observers have weighed up the credibility of the media's claims.

Following Democratic lawmakers' claims that President Donald Trump twisted his Ukrainian counterpart Volodymyr Zelensky's arm forcing him to look into the Bidens' supposed wrongdoings, The New York Times alleged Monday that the Ukrainian president was not the only leader subjected to Trump's "pressure."

However, late on Monday, a letter from the Australian government emerged directly challenging The New York Times' "push" narrative. In his 28 May 2019 letter to AG Barr Australian Ambassador Joe Hockey asserted that the attorney general in Canberra "will use its best endeavours to support [his] efforts in this matter" which clearly indicated that no specific "push" was actually needed.

​Following the release of Special Counsel Robert Mueller's report that found no evidence of Trump-Russia collusion, AG William Barr kicked off an investigation in May 2019 into how the US intelligence community handled the 2016 Trump-Russia probe and whether the Trump campaign was illegally spied upon.

Australia came into Barr's focus – along with the UK and Ukraine – due to the fact that Alexander Downer, then Australian high commissioner to the UK, allegedly played a role in the so-called "spygate" targeting, in particular, a foreign policy adviser to the Trump campaign, George Papadopoulos. During a meeting at a London bar, Downer supposedly gained information from Papadopoulos that Russia had emails that could damage Hillary Clinton, Trump's rival at that time. For his part, the Trump campaign adviser insists that it was a set-up.

"It looks like the latest leak to The New York Times was already debunked", says Jim Hoft, the founder of the conservative website Gateway Pundit. "A letter from Australian Ambassador Joe Hockey written to Attorney General Bill Barr back in May of this year destroys the latest New York Times smear job on President Trump. The Australian Ambassador back in May acknowledged that President Trump announced that Bill Barr will be conducting an investigation into the origins of spygate and offered Barr assistance.  This proves that President Trump did not strong arm the Aussies."

However, The New York Times has somehow shied away from reporting this, the journalist remarks.

According to Dr Binoy Kampmark, a senior lecturer at RMIT University in Melbourne, much of the aforementioned communications between the White House and the Australian government "does not move beyond diplomatic tittle tattle".

Still, the Australian academic does not rule out certain risks for the Morrison cabinet.

"The dangers could be more significant for Prime Minister Morrison than Trump", he warns. "The question is whether he showed favouritism towards a US leader to influence US domestic policy. While the US-Australian alliance is considered strong, to take a partisan approach in this way will be frowned upon."

Meanwhile, Trump's decision to de-classify his phone conversation with Ukrainian leader following the House Democrats' calls for the president's impeachment may have set a controversial precedent. According to Kampmark, "diplomatic confidence is considered an essential part of correspondence and engagement between countries".

"Seeking disclosure of such conversations is not only unusual but unprecedented", the academic opines. "One of the outcomes of this is simple: leaders will be more reluctant to converse in open channels and trust might be lost."

On 24 September, the White House published a transcript of a 25 July phone talk between Donald Trump and Zelensky to repel Democratic lawmakers' assumptions that the US president sought Ukraine's interference in the 2020 presidential campaign by forcing Kiev to look into his political rival Joe Biden's son Hunter and his role in Burisma Holdings in exchange for $400 million in US military aid.

The released transcript revealed that Trump indeed mentioned Joe Biden citing the latter's supposed attempt to stop the prosecution of Burisma Holdings and bragging about it. According to the Republicans, who denounced the Democrats' claims as yet another attempt to disrupt Trump's presidency, the phone talk did not contain any referrals either to pressure, or "quid pro quo" or repeated demands to investigate Biden's son.

Trump Works to Out Whistleblower Ahead of Impeachment Vote