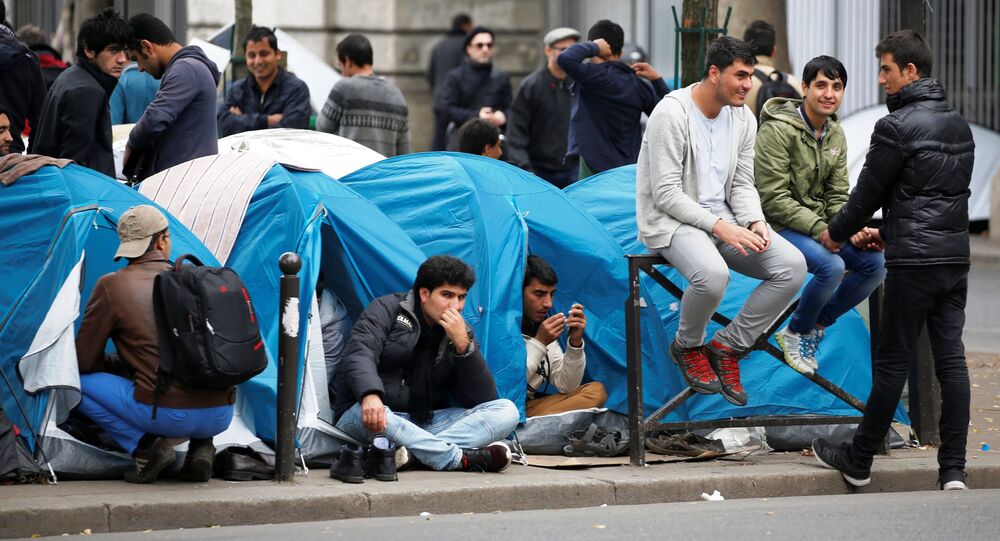 The French President surprised his compatriots with unprecedentedly harsh statements about the problems surrounding immigration: "The leftists haven’t wanted to look at this problem for decades,” he said, adding that “by claiming to be humanist we are sometimes too lax.”

Several observers were quite positive about the President's desire to discuss the migration topic "taboo-free", although many leftists were shocked at Macron's speech, which they consider an attempt to play on the flank of Marine Le Pen's National Rally.

At the same time, the President's appeal to the new topic is not accidental, given the election calendar and the results of opinion polls about attitudes towards visitors and their integration into the country.

"For decades, leftists have turned a blind eye to this problem. As a result, representatives of the lower social strata have joined the extreme right. We do the same as those three monkeys – we close our eyes so we don't have to see," Jean-Paul Gourévitch said.

"These statements have an interesting point. When Macron makes such statements, practically borrowing our words, everyone thinks it's good. And when we make such statements, everyone thinks this is bad. We are instantly called racists and xenophobes… But when he says that, everything's great! This shows the extent to which media is dominated by opinion", European MP from the National Rally Gilbert Collard said about Macron's unexpected "turn".

The latest annual public opinion poll conducted by Ipsos-Sopra Steria for Le Monde, the Jean Jaures Foundation and the Montaigne Institute shows that immigration ranks 4th on the list of issues that the government should address as a matter of priority (32%) after environmental protection (48%), increase in purchasing power (46%), and prospects for the development of a social protection system (45%).

Around 63% of respondents think that "there are too many foreigners in France"; 66% say that "in general, immigrants don't seek integration". 64% of respondents "no longer feel like masters in their country" (60% in 2017). In 2018, the number of applications for asylum in France increased by 23% compared to 2017.

Additionally, the fact that immigrants from Albania and Georgia "lead" in filing applications is of particular interest to the French authorities.

Within the majority party, not everyone supports the new direction of Emmanuel Macron's policy. According to a source in the French government, "discussing migration is a positive step", but there is no unity between the right and left wings in their approach to considering this issue.

Underscoring the divisiveness of the issue, on 17 September, 15 politicians from the left-wing of La République En Marche Party published an appeal calling on the public to "avoid hysterical tension in the discussion of the migration issue, inversely proportional to the current state of affairs" and "to discuss integration issues".

Gerard Larcher, Chairman of the Senate, regrets suppression of the integration issue in Macron's discourse.

"This is a crucial question: how can the migration issue be resolved if the issue of co-development in certain countries, the issue of asylum in Europe and the issue of integration are not addressed at the same time?"

For her part, Marine Le Pen said that she "doesn't believe" that Emmanuel Macron would take a tougher stance on the migration issue and accused the President of wanting to score points among the right before the upcoming municipal and presidential elections.

Sputnik: What's your take on a possible upcoming coup – at least of words – in Emmanuel Macron's migration policy?

Jean-Paul Gourévitch: Two issues will be discussed during the debate, which will soon be held at the National Assembly: the provision of state medical assistance (which is confused with the administrative procedure for granting residence permits to sick foreign citizens), and the issue of the right to political asylum.

These are only two of the many components of the migration policy, which also include questions about unaccompanied minor migrants, the monitoring of the filing of international students’ dossiers, employment opportunities for those accepted by France, etc.

Sputnik: 64% of the French "no longer feel like masters in their own country". How do you explain this percentage?

Jean-Paul Gourévitch: This is nothing new. For ten years, about two-thirds of French have believed that immigrants are not good for the country. What is relatively new is that official data – the data from the French Bureau of Immigration and Integration – shows that immigrants in France make up 11 percent of the population and their children account for another 12 to 14 percent.

This means that about a quarter of French residents are directly related to immigration. At the same time, this data doesn't take into account illegal immigrants. Perhaps this can explain the current manifestation of hostility towards immigrants – in some departments, immigrants with families make up the majority of the population.

© AFP 2020 / PASCAL GUYOT
A woman walks by a poster reading "They are coming, Migrants in our town centre" in a street of Beziers, southern France, on October 12, 2016.

Sputnik: While some say the immigrant invasion is a fantasy, others say it's a reality. Who is right?

Jean-Paul Gourévitch: I don’t like to say what’s good or bad. My job is to combat misinformation systematically. My book, The Great Replacement: Reality or Fake News? (Le Grand Remplacement: Réalité ou Intox?), is the example of this. Thus, I allow everyone the opportunity to form their opinion. I do this based on documented data, not stereotyped ideas, rough estimates, or something imaginary.

Sputnik: Tension is growing within Emmanuel Macron’s party. The right-wing supports him. But not everyone shares his opinion among those who joined him at the very beginning.

Jean-Paul Gourévitch: La Republique en Marche is a centrist party. Therefore, there is friction between the left and right wings, with one being in favour of protecting human rights, and the other waiting for tougher migration policy.

Sputnik: Will the migration issue become one of the most pressing issues during the 2022 election campaign?

Debates on migration policy are scheduled for 30 September at the National Assembly and 2 October in the Senate.