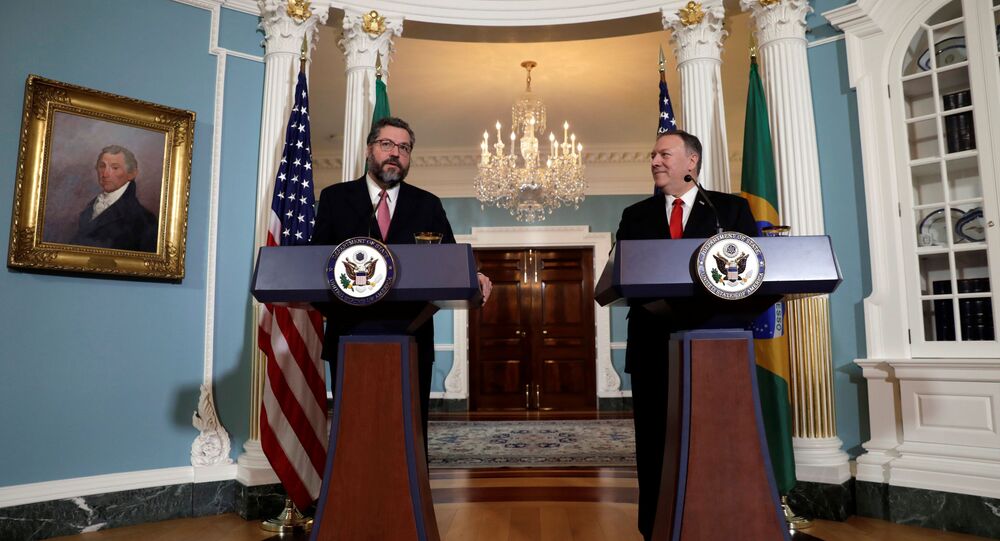 Brazil and the United States have been negotiating for the removal of barriers in order to facilitate bilateral trade. Brazilian Foreign Minister Ernesto Araujo has already visited the US six times this year, with the American media labelling the latest meeting on 13 September as “a new era of close cooperation” between the two nations.

But some experts have voiced their doubts as to how far this new level of cooperation can go. Brazil is part of the South American economic and political bloc Mercosur, together with Argentina, Paraguay, Uruguay, and until last month Venezuela, which was suspended indefinitely in August. This raises doubts about the parameters of a possible agreement between the states.

In July, US President Donald Trump said he would pursue a trade agreement with Brazil, deepening cooperation.

During his visit to Washington several weeks ago, Brazil’s foreign minister said that his country is interested in a deal. “There is no specific timeline but we want it soon”, said Araujo after talks with his US counterpart Secretary of State Mike Pompeo.

But at the same time, Araujo in a press statement admitted that Washington still cannot decide whether it would be more profitable for it to negotiate the issue directly with Brazil or within the framework of Mercosur.

Within the bloc, Brazil has obligations to other partners in view of the general trade policy that limits the country's freedom to enter into agreements with third countries.

“We confirm that we want to negotiate, and as for the format, the US itself sometimes has doubts as to whether it would be better to negotiate with the customs union or with individual countries. This is an open question”, the minister was quoted by local media.

Public international law expert Evaristo Pinheiro commented on the legal point of view of the issue:

“According to the principles regulating a single external tariff, only together Mercosur member states can sign trade agreements with third countries", the specialist noted.

“So, for example, talks on a deal between Mercosur and the European Union were conducted in the same way, and it took a very long time", Pinheiro said. Indeed, the massive trade deal was only agreed in June 2019, after 20 years of negotiations.

Pinheiro also explained that there are some cases in which bloc members can hold tariff negotiations. However, none of these cases can be applied to trade talks between Brazil and the United States.

“Before negotiating a tariff agreement, only between Brazil and the US, separate talks on the flexibilisation of Mercosur need to be held, which are usually not easy”, the specialist explained.

Pinheiro practically excluded the possibility of negotiations on a tariff agreement between the two countries in the short-term, but at the same time, according to the expert, there are other areas where Brazil and the United States could cooperate, such as a mechanism for resolving individual labour disputes and other aspects of trade facilitation.

“Everything that is not connected with tariffs can be resolved”, the expert said.

Evaristo Pinheiro believes that at the moment, the South American trade bloc already has certain exceptions that prevent it from becoming full-fledged. If Brazil would achieve the right to conduct bilateral negotiations with the United States, this would also have to apply to other countries.

“This is the usual criticism of Mercosur. That is, we are not able to move towards a full-fledged common market. We have an untransparent customs union".