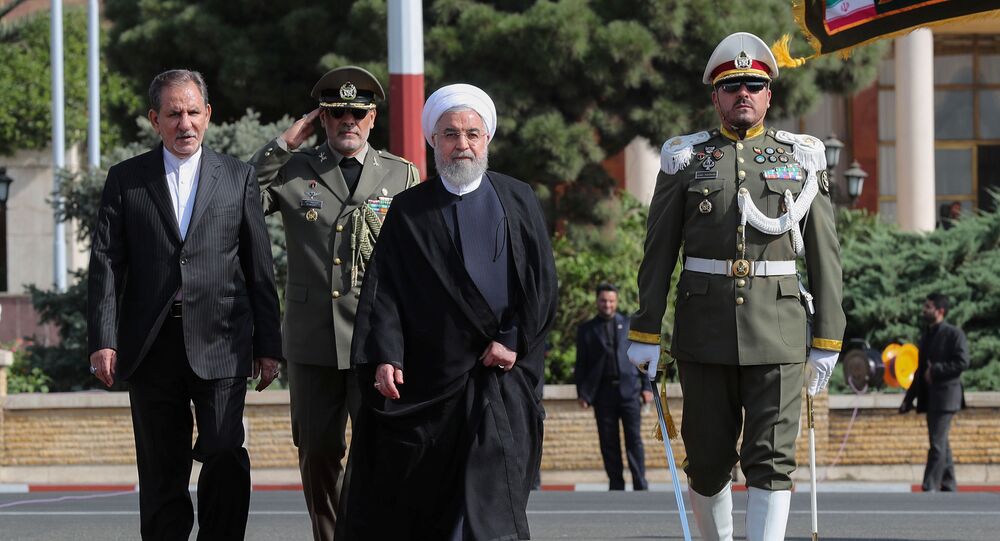 Rouhani’s Plan Offers US, Saudis Path Out of ‘Dead End’ Their Policies Created

As Washington uses questionable evidence to call on other nations to condemn Tehran, Iranian President Hassan Rouhani is expected to take a much different approach and use his time at the United Nations General Assembly (UNGA) this week to propose a cooperative agreement to stabilize and secure the Persian Gulf region.

“I will also get the Iranian nation’s message across to the international community,” Rouhani said Monday after touching down in New York for the 74th UNGA. “The Iranian people are suffering from a cruel economic war. Iran is a nation of resistance and wants everyone to return to their commitments and laws.”

Rouhani is slated to deliver his address to the assembly and propose his “Hormuz Peace Initiative” on Wednesday. The roadmap would reduce the prominence of foreign forces in the region that Rouhani asserts “could cause problems and insecurity.”

Meanwhile, US President Donald Trump appeared open to the idea of diplomacy, despite Washington’s August request for Australia, France, Germany, Japan, Norway, South Korea and the United Kingdom to join in a maritime coalition in the Persian Gulf.

"I never rule anything out ... nothing scheduled at this moment,” the US president claimed when asked about potentially meeting with his Iranian counterpart on the sidelines at the UN. However, Trump appeared to almost immediately walk back his “never rule anything out” attitude when it came to entertaining French President Emmanuel Macron’s offer to mediate talks between the two powers.

"We don't need a mediator,” Trump told reporters on Monday. He followed up by insisting that Iran’s administration knows who to call.

Prior to Trump’s claims, UK Prime Minister Boris Johnson announced his country would back a Saudi or US military response to the September 14 attacks on two Saudi Aramco oil facilities, even though he could not fully commit to blaming Iran, as Riyadh has.

“The UK is attributing responsibility with a very high degree of probability to Iran for the Aramco attacks,” the prime minister said, according to Reuters. “We think it very likely indeed that Iran was indeed responsible.”

The UK, like the majority of involved nations, appears to reject the Yemeni Houthi movement’s claim of launching the oil field attack.

Mohammad Marandi, an expert on American studies and postcolonial literature who teaches at the University of Tehran, joined Radio Sputnik’s Loud and Clear on Monday to offer an Iranian perspective and also present the parallels in leadership that have resulted in dead-end situations for both Saudi Crown Prince Mohammad bin Salman (MBS) and Trump.

“The Iranians are not seeking conflict,” Marandi explained to hosts Brian Becker and John Kiriakou. “The Iranians have been telling the Saudis to end the war in Yemen. They’ve been pushing for a negotiated solution for a very long time, but the Saudis are sort of like Trump - they’ve both driven themselves into a dead end.”

“The Saudis went in to win the war in Yemen in one or two weeks, and the longer they continue this war, the more humiliating it is for the regime, and MBS becomes more and more trapped,” he said, noting that at this point, the pride of Saudi Arabia as a country and MBS as a leader are both contributing factors to the conflict’s continuation.

Marandi believes that Trump is now enduring the “same problem” as MBS and has “driven US foreign policy into a dead end.”

“He thought that through maximum pressure and through economic warfare - or what the Iranians call economic terrorism - that he will make Iran capitulate. He has failed … the Saudis and the Americans seem to be suffering from the same fate,” he contended.

Even if the US and Saudi Arabia’s claim that Iran carried out the attacks were true, that would also mean that this “swarm of drones and missiles” first had to travel within proximity of US military forces in the Persian Gulf, whether that would be over naval ship, around an airbase or under an aircraft.

“Traditionally, over the last couple of years, every time a successful drone strike is carried out, we hear Western pundits and so-called experts say that Iran is providing the Yemenis with these weapons,” he noted.

“This crippling attack showed the vulnerability of Saudi Arabia,” Marandi claimed. “And if the United States makes the big mistake of carrying out some sort of attack on Iran, imagine what Iran can do to Saudi Arabia.”

“That would be the end of these two regimes,” he asserted. “You’d have people fleeing the Arabian Peninsula for Europe; you’d have a global economic meltdown.”

“The battleground would be from the Mediterranean to the Red Sea to the Hindu Kush to Central Asia and, of course, to the Persian Gulf. I don’t see a sane president allowing that to happen, but I don’t know [the] degree of President Trump’s sanity,” Marandi admitted, leaving room for Trump’s unpredictability.