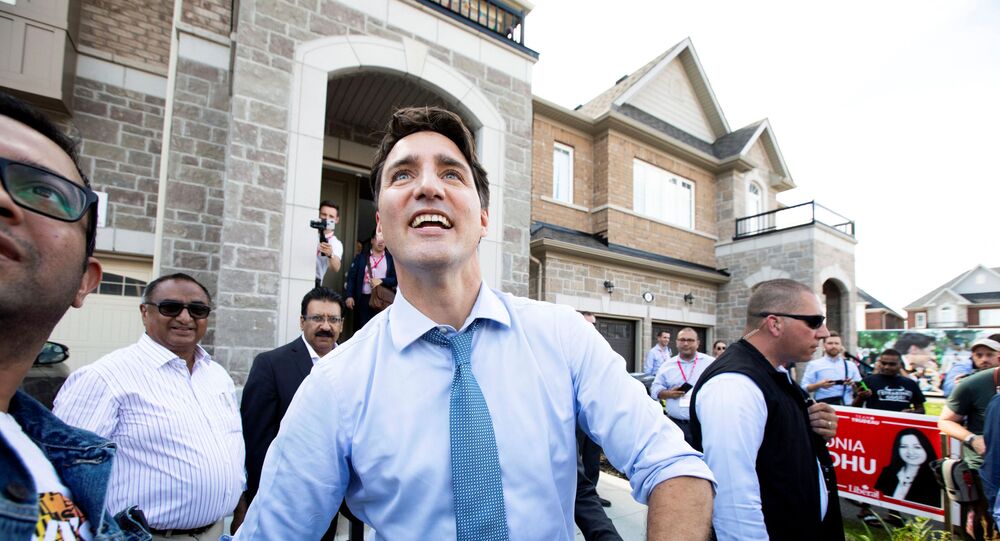 Recently, Canadian Prime Minister Justin Trudeau has landed in hot water after several pictures and videos from almost twenty years ago emerged online in which he was seen wearing brownface makeup.

Rémi Tremblay, the editor of Le Harfang and a contributor to the Council of European Canadians, expressed his opinion about the brownface makeup scandal surrounding the prime minister.

Sputnik: How is the Liberal party going to be affected by the Trudeau "blackface" scandal? How do you expect the Conservative Party and New Democratic Party (NDP) to use this scandal?

Rémi Tremblay: Well the NDP has accused Trudeau of racism, which is something quite in tune with their agenda. By trying to pass Trudeau on his left, both with respect to social and societal issues, their response was to be expected. They want to be “more Justin” than the original one, so they had to condemn this.

On the right, Andrew Scheer has been raising this scandal like it was a real issue. I think the motivation behind [it] is to take some kind of revenge. Since the beginning of the campaign, several Conservatives have been in the spotlight for some quite mild statements on social media a few years ago. Statements that were somehow critical of a certain aspect of multiculturalism were [cited as] evidence that the candidate was a white supremacist. Now, it's “let him who is without sin cast the first stone”.

Trudeau is not “cleaner” than those Conservative candidates who have been smeared in the media.

That whole controversy tells a lot about our society. It shows how fast political correctness has imposed itself and to what extent this madness has reached. Trudeau has always been a staunch supporter of diversity and equality; he really did not mean any wrong. Back then, it was ok  to get costumed like that, but now it can ruin your career.

Trudeau had been judging the past with anachronistic PC glasses and now, it is his turn to see his past judged.

Sputnik: During his last press conference, Justin Trudeau left open the possibility that more blackface photos would surface. Does it mean that this scandal won't go away?

Rémi Tremblay: It is hard to tell, but one thing is sure, it will be hard for him to turn the page. The elections are a month away and [unless] he can impose new subjects, it will stick to him for the next four weeks. On the other hand, he might actually wish for that. While we are discussing this wedge issue, no one is talking about his disastrous years in office. I don’t think that the blackface scandal matters as much as the huge deficits, the surrender of our borders, the increase of mass immigration, the betrayal of our farmers, and so on.

Sputnik: What is going to happen to Trudeau's public image? How have previous public scandals (SNC- Lavin scandal) affected Trudeau?

Rémi Tremblay: Well, it did affect his image as a virtuous multi-culturalist. People have come to expect and accept corruption scandals with the Liberal Party, but in this case it affects his image with minorities, a voting block he relies on. His feminist veil was lifted when he brutalised a female MP in Parliament, now, his image as a paragon of anti-racist virtue will definitely suffer.

Sputnik: Do you think that the Canadian Liberal Party promise to ban assault weapons is just a part of a distraction campaign?

Rémi Tremblay: Of course! Gun rights are very limited in Canada and the issue of gun violence is linked to gangs who buy illegal guns and do not get them registered. Automatic firearms are already banned in Canada. The increasingly more common shootouts in Toronto have nothing to do with lawful gun owners and everybody knows it. By talking about this ban, Trudeau simply wants to present himself as progressive despite what has happened.

Sputnik: How has Canada's mainstream media covered the recent scandal? Do you think it's safe to say they are trying to distance themselves from him?

Rémi Tremblay: In French Canada, the Liberal media – La Presse and Radio-Canada – were very hypocritical in the sense where they claimed that Trudeau’s gesture was not really racist. It is hypocritical, because whenever it is somebody else who does something remotely similar, they are the first one to call the lynching mob.

In English Canada, the reaction was more honest and the media did try to distance themselves as you rightly pointed out. The reaction of long-time Liberal Warren Kinsella, who vehemently denounced Trudeau, can at least be considered consistent.

Woke Trudeau Is Having a Nightmare