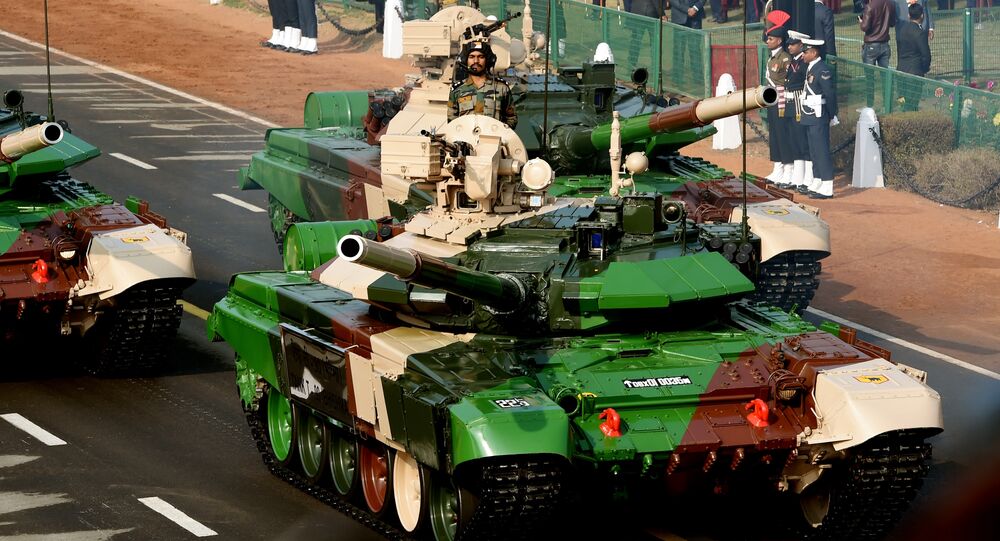 After his election win, Prime Minister Narendra Modi doubled down on the modernisation of the Indian Armed Forces. Indian political analyst Amrita Dhillon has explained Modi's focus on the military build-up, the defence minister's statement on “no first use” of nuclear weapons, and Russia's competitive advantages as India's top arms supplier.

Over the past few months, the Indian leadership has touched upon a number of defence issues including: first, the establishment of the Defence Space Agency (DSA) in April and the Defence Space Research Organisation (DSRO) in June, aimed at bolstering India’s space warfare capabilities; second, the Chief of Defence Staff (CDS) reform; third, the decision to spend $130 billion to accelerate the modernisation of the country's military forces, to name just a few.

Amrita Dhillon, an Indian political analyst and founding editor of The Kootneeti magazine, has elaborated on what is behind the sweeping military reforms kicked off by PM Modi during his second tenure.

Sputnik: On 15 August 2019, Indian Prime Minister Narendra Modi announced his decision to appoint a chief of defence staff (CDS) who will act as head of the Army, Air Force, and Navy. Indian politicians have offered to establish a CDS since 2001 to ensure coordination between all the military branches. Why has Modi gone for it now? What's behind the CDS reform, in your opinion? Who is likely to fill the position?

Amrita Dhillon: Demand for a CDS first came as a suggestion by the Kargil Review Committee and Group of Ministers in 2001, who felt the need for an integrated approach to the world's second-largest armed forces. However, in my view, the government initiated the process of integration then only by establishing the first tri-service theatre Andaman and Nicobar Command (ANC) and Headquarters Integrated Defence Staff (HQ IDS).

The creation of a CDS will provide an opportunity to transform the existing defence architecture. Appointment of a CDS would enable the defence establishment to adjust to the changing character of war, given the complex set of threats and challenges that India faces. This will also help cut back any unnecessary spending, like duplication of assets in infrastructure and human resources in training or operational commands.

The Indian Armed Forces in most of the cases follows the pattern of inter-service seniority. As IAF Chief B.S. Dhanoa, the senior-most amongst all the three chiefs, is going to retire on 30 September. However, there are no government announcements for his replacement yet, which is unusual in the Indian Forces. In case, he gets an extension, he will remain the senior-most chief and likely to be made the CDS. In another scenario, if he retires and the government follows the pattern of seniority then after his retirement on 30 September, COAS Bipin Rawat will become the senior-most chief and be among the first choice for the position of CDS.

Sputnik: On 16 August, Indian Defence Minister Rajnath Singh dropped the hint that India’s “no first nuclear weapons use” doctrine is open for change in the future. "India has strictly adhered to the [‘No First Use’] doctrine. What happens in future depends on the circumstances", he tweeted. What became the trigger for this abrupt statement, in your opinion? What message did Singh's statement send and who is the major addressee?

Amrita Dhillon: I believe his statement was merely to build tactical pressure on hostile neighbours, who are trying very hard to push India to the brink of war.

Pokhran is the area which witnessed Atal Ji’s firm resolve to make India a nuclear power and yet remain firmly committed to the doctrine of ‘No First Use’. India has strictly adhered to this doctrine. What happens in future depends on the circumstances.

​India is a responsible state with more than a billion people. [It is] a widely celebrated democracy, where ministers and armies are directly answerable to its people. The masses that elected this government will never support a nuclear war, and the government knows this very well. India has a history of more than 5,000 years of never attacking any country first and I believe the Modi-led government will adhere to this principle only.

Sputnik: In September, the Indian government announced that it would spend $130 billion in the next five-seven years to speed up the modernisation of the country's military forces and improve their combat capabilities. Why did Modi decide to give a boost to the Indian Army? What challenges is Modi trying to address in the first place?

Amrita Dhillon: The Indian Armed forces are in a dire need of modernisation, especially, when you are dealing with a neighbour who's not normal and uses cross-border terrorism as a diplomatic tool. India is looking into all left, right and centre for the scopes of modernisation, either it is in the field of conventional war weapons or the next generation cyber warfare.

The hybridisation of conflicts is no longer a hypothetical concept. The threat of information warfare in all its manifestations is being witnessed in Kashmir. Rafale and S-400 are, of course, part of that modernisation PM Modi is trying to address.

Amrita Dhillon: Of course, India is planning to cope with future challenges, when the US or French presidents are making statements about the weaponising of satellites and creating a space force and strengthening their positions in outer space defence, India needs to catch the bus before it gets too late.

The Integrated Space Cell is another visible integration of the Indian Armed Forces, where the three services of the armed forces, along with the Department of Space and ISRO, is overseeing the security of its space-based military and civilian hardware system.

As I said, now warfare is not only limited to borders and soldiers. This is an era where war has reached to as micro as the individual level through social media platforms like Twitter, to the macro level of outer space. I believe PM Modi and his ministers to see this future militarisation of space, and they're joining hands with the space powers to meet the future challenges, unlike the Pakistani minister of science and technology, who himself has become a Twitter troll and consider investment on space projects as wastage of funds.

Sputnik: Meanwhile, Russia and India are steadily intensifying military cooperation despite US displeasure and looming sanctions under the Countering America's Adversaries Through Sanctions Act (CAATSA). During the latest EEF summit in Vladivostok, where Modi was invited as a chief guest, Russia and India signed a joint statement which envisages the strengthening of bilateral defence cooperation, among other issues. Does it mean that Russo-Indian military cooperation has reached a new level, and how will it further evolve in your opinion? What are Russia's competitive advantages in this field (compared to other arms producers) when it comes to India?

Amrita Dhillon: I believe that the era of non-alignment is over; this is an era of multi-alignment, where India has gradually grown to status to have its say. External pressure such as CAATSA is there, but as PM Modi expressed his plans to spend $130 billion over the next five-seven years on the modernisation of armed forces, the United States, would certainly not take any risk to impose sanctions on India.

Deeply touched by President Putin’s gracious gesture to accompany me to Zvezda shipyard, which is poised to make a huge contribution to development of Arctic shipping. pic.twitter.com/vyUENhl0QL

​Coming onto the S-400 purchase by India, I would reiterate Indian External Affairs Minister Subrahmanyam Jaishankar's words, who said "We have many relationships...they have a history...We will do what is in our national interest..." during the joint press conference with US Secretary of State Mike Pompeo in June this year.

Another point is that PM Modi understands the market requirements and capabilities of both Russian technology and the Indian workforce. That's why he proposed a technology transfer between the two countries and stressed the production of military equipment in India in a cost-efficient manner. He further expressed his vision to sell jointly produced weapons to third countries. This trust and mutual understanding between the two countries are above all the reasons to believe how relations have reached a new level and will further evolve.

Amrita Dhillon is the founding editor of The Kootneeti Magazine, a New Delhi-based publication on International Relations & Diplomacy.