New Delhi's decision to reorganise Jammu and Kashmir into two union territories has prompted protests from Islamabad and Beijing. Dr Qanta A. Ahmed, a British-American political commentator, has explained why neglecting the long-disputed Kashmir issue is fraught with risks for India, Pakistan, and the US.

Kashmir has yet again entered the focus of worldwide attention following New Delhi's decision to make all the provisions of the Indian constitution applicable to the India-administered Jammu and Kashmir region and to revoke Article 370 that provided the state with a special autonomous status.

On 6 August, India's parliament approved the reorganisation of Jammu and Kashmir into a union territory (UT) and creating a separate UT in Ladakh, which immediately prompted a wave of criticism from neighbouring Pakistan. Islamabad claimed that the change of the status of the Muslim-majority province was illegal and suspended diplomatic ties with New Delhi, expelling the Indian high commissioner.

In a bid to internationalise the Kashmir issue, Pakistani Prime Minister Imran Khan pledged to bring it up at the UN General Assembly (UNGA) session in New scheduled for 27 September. For its part, New Delhi argues that the Jammu and Kashmir status change is India's internal matter.

Ahead of the upcoming UNGA session, Indian Ambassador to the US Harsh Vardhan Shringla published an op-ed in The New York Times on 19 September, addressing PM Khan's accusations and vowing to build a more prosperous Kashmir.

"The decision of the Indian Parliament to reorganize the province and rescind [Article 370] corrects a historic wrong", Ambassador Shringla insists. "It opens the door to rejuvenate a moribund economy and promote horticulture, tourism and handicrafts that are the unique strength of its culture".

Dr Qanta A. Ahmed, a British-American Muslim, non-fiction author, and broadcast media commentator, whose family left India and had to go Pakistan following the partition of 1947, argues that the reorganisation of Jammu and Kashmir contradicts "a UN resolution from 1948 that has asked India and Pakistan [sic] contested territory in a state-wide approach".

Between 1846 and 1947, Kashmir used to be a princely state under British rule. After the partition of British India, Hari Singh, the last ruling maharaja of Kashmir, signed the Instrument of Accession with the Indian government on 26 October 1947 in exchange for military aid against Poonch rebels backed by Pakistan. However, Pakistan did not recognise the accession as legal, which triggered the India-Pakistani War of 1947.

The UN tried to mediate the situation by establishing the United Nations Commission for India and Pakistan (UNCIP) in 1948 and passed Security Council Resolution 47 seeking to hold a plebiscite to decide the fate of Kashmir. However, the plebiscite did not take place, with India and Pakistan engaging in new wars over the region in 1965 and 1971, as well as other smaller military conflicts.

Up until now, both countries claim Kashmir in its entirety, while China also lays claim to a border territory that India views a part of the Ladakh region of the state of Jammu and Kashmir.

According to Dr Ahmed, there is no surprise that both India and Pakistan have eyes on the region: "Kashmir is a spectacularly beautiful and very rich area which could be completely turned around with incredible choice of investment, and it’s also a critical geopolitical location and a critical source of water; it’s a very important place".

While India considers Kashmir its sovereign territory, Pakistan "feels extremely linked to the Kashmiris because they are majority Muslims", she highlights.

Dr Ahmed raises concerns over reports about alleged arrests in the India-administered Jammu and Kashmir, as well as a communication blackout in the region following the revocation of Article 370.

"The state is able to silence a population of eight million, they have no cell phone links… there’s no internet access, there’s no reporting coming out of there", she notes, stressing that "the other part that’s very important is what this means for Pakistan".

On 13 August, Pakistani PM Imran Khan appealed to the UN and the UN Security Council (UNSC) requesting an urgent meeting to address the issue.

However, at the informal UNSC summit that followed Khan's request, India’s envoy to the UN, Syed Akbaruddin, elaborated that New Delhi had taken necessary counter-terror measures in the region and stressed that matters relating to Article 370 did not have external ramifications. India has repeatedly accused mainstream media sources for circulating a "false narrative" about the ongoing situation in the region. 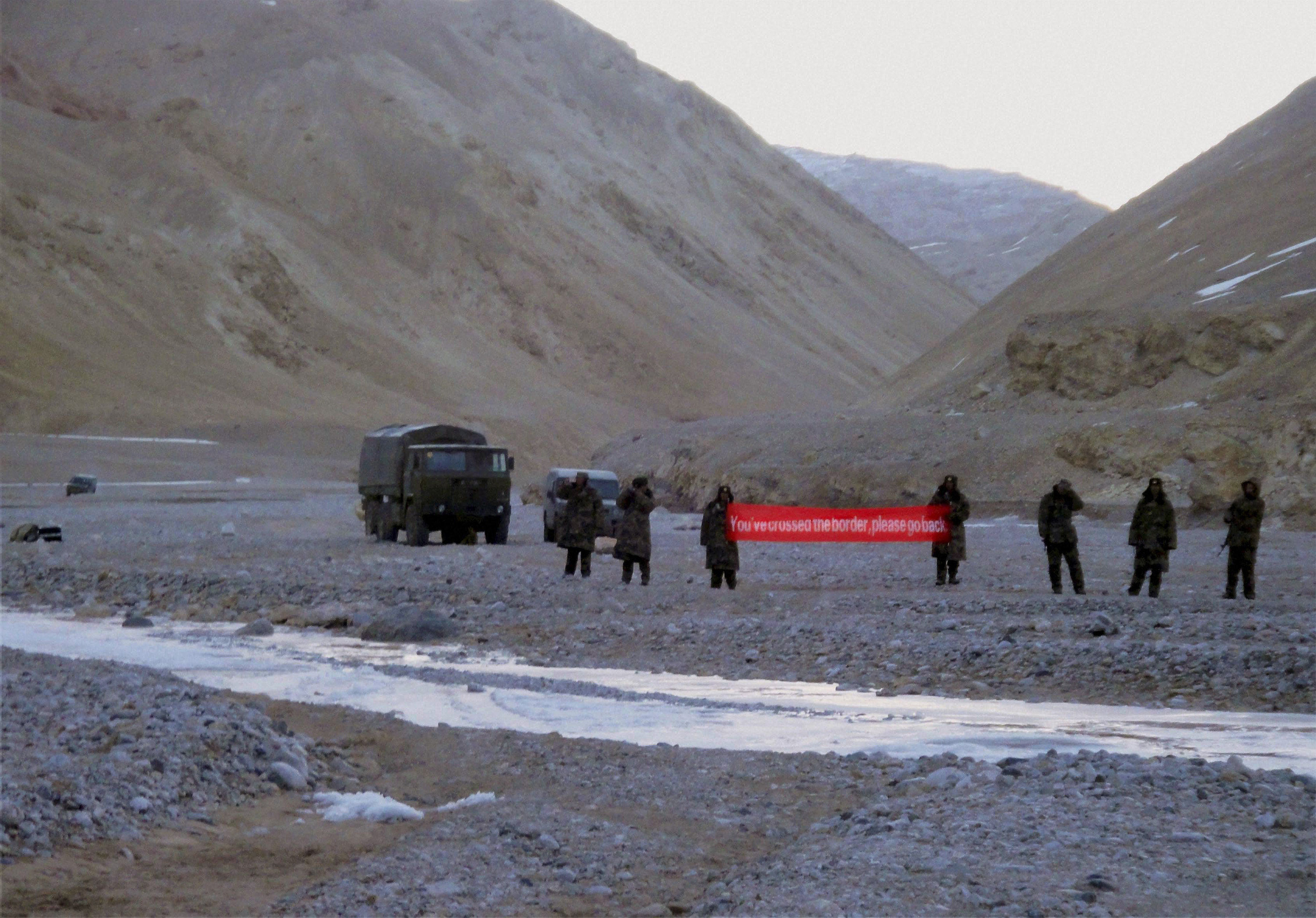 © AP Photo /
(File) In this May 5, 2013 file photo, Chinese troop hold a banner which reads, "You've crossed the border, please go back," in Ladakh, India

Meanwhile, New Delhi's recent legislative initiative has also stepped up the border dispute with China over Ladakh. Beijing opposed India's decision to turn Ladakh into a separate union territory, as both countries claim a considerable area in the region.

Responding to Beijing's concerns, New Delhi pointed out that the newly-organised UT does not have any impact on the status of the Line of Actual Control (LAC) between India and China-controlled territories.

On 11 September, Indian and Chinese troops engaged in a face-off near the northern bank of Lake Pangong Tso in the region, but disengaged after negotiations between the two sides. A few days later India kicked off massive military drills in the high altitude area of Eastern Ladakh, involving transport aircraft, battle tanks, and combat helicopters.

"So, while this is going on between India and Pakistan, China is the silent partner watching; and India has to understand that a conflict with Pakistan will mean a conflict not only with Pakistan but with Pakistan and China. That’s not something that one wants to imagine", Dr Ahmed remarks.

The author warns that the unsolved Kashmir dispute is threatening Washington's dominance in the region, especially given the expected US withdrawal from Afghanistan. She suggests that Pakistan still remains a key for Central Asia and the Middle East, adding that China and Russia are filling the vacuum of power left by the US.

"This kind of casual disengagement from the Indian-Kashmiri crisis on the base of the United States is deeply hurting its future potential for allegiances", she says. "And allegiances are going to change over activities like this; Pakistan is already much closer to China than it ever was, and China came in, and Russia has come in also in the post-American vacuum after Afghanistan… [The US] is going to have to come back and ask help from Pakistan which is on the border of Iran, with which US-Iranian tensions are rising; and there is going to be cataclysmal aftermath in Afghanistan that will probably also require some form of American response".

According to Dr Ahmed, Moscow and Beijing may emerge as powerful mediators in the longstanding dispute, while Washington's strategy of ignoring the Kashmir issue is fraught with risks not only for India and Pakistan, but the Western world in general.

"So, if I was a Chinese leader or if I am a Russian leader, I am looking for the opportunities, going in and thinking about stabilising because these people are completely friendless and completely defenceless against one of the world’s most powerful militaries; and that cannot be allowed to happen", she concludes.