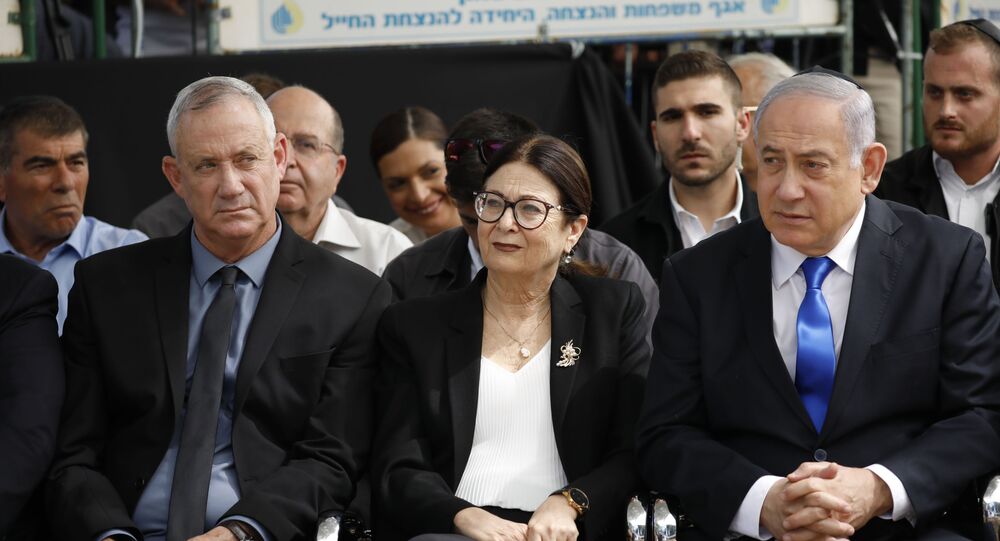 Blue and White is holding the lead with 33 out of 120 seats in the Knesset, while Netanyahu’s Likud has won 31 seats, Sputnik reported Thursday. The center-left political coalition, led by Blue and White, and the Likud-led right-wing bloc have 57 and 55 seats, respectively, each falling short of the 61-seat majority threshold necessary to form a government.

Although there appears to be division in Israel, as Netanyahu is struggling to form a right-wing majority coalition, all parties in Israel share common “racist,” “extreme anti-Palestinian, anti-Arab and pro-expansion” ideologies, Richard Becker, an anti-war organizer and author of the book, “Palestine, Israel and the US Empire,” told Radio Sputnik’s Loud & Clear Thursday.

With Gantz refusing to form a unity government under Netanyahu’s leadership, it’s possible that Israel might see someone else as prime minister for the first time in a decade, according to Becker.

“I think it’s very possible under these circumstances. Netanyahu is now kind of in a corner in Israeli politics,” Becker told hosts John Kiriakou and Walter Smolarek.

“Both Gantz and [Yisrael Beiteinu party founder Avigdor] Lieberman have made the point that they won’t join a so-called national unity government that has Netanyahu as the prime minister. Netanyahu is desperately trying to hold on, partly because he wants to hold on. He’s the longest-serving prime minister in the history of Israel, which came into being only, of course, in 1948. He’s also facing corruption charges,” Becker explained.

“Netanyahu has these issues, and it’s hard to see a way out of this at this point that would make Netanyahu the next prime minister. It is possible to see a way of not having a new government form at all, in which case Netanyahu would stay in power until a new election takes place,” he continued. “I don’t think that's the most likely scenario, but it’s certainly possible.”

According to Becker, the points of division between Israel’s Zionist parties are over the extent to which the country should be religious or secular, not over how to treat Palestinians. He noted how Gantz, whose party is considered a centrist and liberal political alliance in Israel, made frequent reference during his campaign to the war launched by Israel against Gaza in 2014 in which thousands of Palestinians were killed. Gantz was the Israel Defense Forces’ chief of general staff at the time.

“Gantz made it clear over and over in the campaign .. made sure to reference 2014, the horrific war against Gaza, in which thousands of Palestinians were killed and tens of thousands were injured and hundreds of thousands were made homeless. He’s proud of it. He wants everyone to know that’s him … Division in the Zionist party politics is over how much Israel should be a fundamentalist religious state or a secular state. Israel has generally been a secular state since the beginning, but the extreme right wing and the extreme right-wing religious parties have grown a lot,” Becker explained.

“Parties that make up part of the Likud-led [alliance] are strongly representative and strongly dedicated to the ultra orthodox agenda for Israel, which is to convert Israel into a theocracy. Their [Israel parties’] differences are not over how to deal with the Palestinians,” Becker added, noting that the “dominant trend in Israeli politics today is extreme racist, extreme anti-Palestinian, anti-Arab and pro-expansion.”