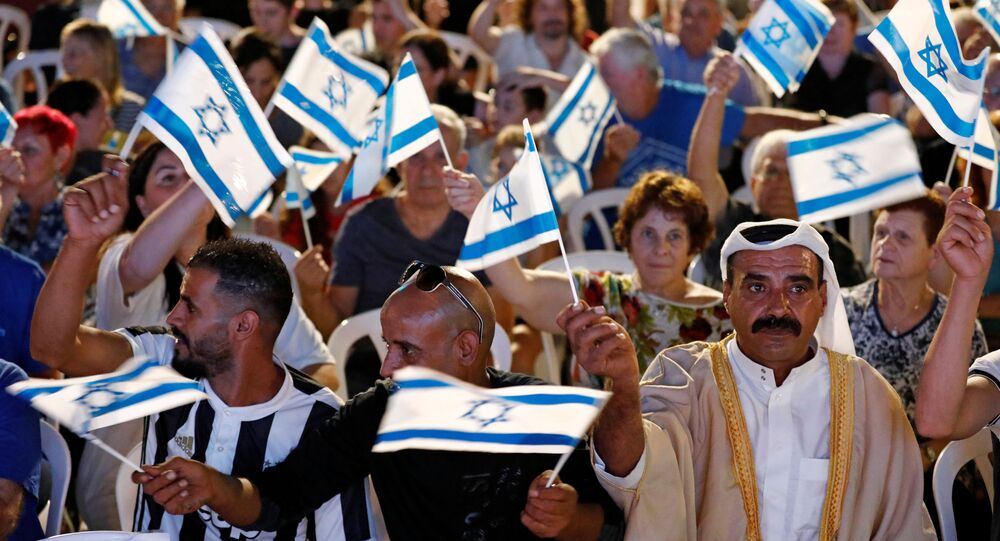 No political bloc has emerged as a clear winner in the September snap legislative elections in Israel, prompting political leaders to seek compromises and forge alliances. Current and former Israeli politicians have weighed up the probability of Likud and Kahol Lavan forming a unity government and Netanyahu's role in it.

With 98 percent of the votes counted, Kahol Lavan (Blue and White) is holding the lead with 33 out of 120 seats in the Knesset, while Likud has gained 31 seats. The centre-left political coalition led by Kahol Lavan and the Likud-led right-wing bloc have 57 and 55 seats respectively, falling short of passing the 61-seat majority threshold.

"Benny, it is on us to form a broad unity government. Today. The nation expects us, both of us, to accept responsibility and work together", Netanyahu said, as quoted by Haaretz.

In an apparent response to his competitor, Gantz noted that "in order to form a unity government, one can't come with political blocs and spins", emphasising that he intends to form a "broad, liberal, unity government".

"After an election that was forced on Israel, [Israel] voted and made a clear choice. The people voted for unity and Kahol Lavan won the election. It's the biggest party", Gantz said.

Haaretz also cited Yair Lapid, Kahol Lavan's "number 2" politician, who stressed that a unity government could be established if "Bibi steps aside", insisting that Netanyahu "is attempting to drag the country into a third election".

For his part, Avigdor Lieberman, the leader of Yisrael Beiteinu, who upset the fragile balance of power in the Knesset in May which forced Netanyahu to announce a second election in the same year, urged the prime minister to reach a compromise with Gantz.

"I consider Netanyahu’s offer to Benny Gantz totally unacceptable", says Ksenia Svetlova, a fellow at the Interdisciplinary Centre Herzliya and former member of the Knesset. "This is a false narrative, according to which Israel has essentially chosen the right camp; the majority has voted for the right camp, so Gantz should join Netanyahu. What you need to remember is that Netanyahu has already failed to form a government. He has failed to form a government, and he cannot do this at the moment".

Svetlova expects Israeli President Reuven Rivlin "to entrust the formation of the government to Benny Gantz" given that Kahol Lavan received two mandates more than Likud. She also insists that Gantz is the one who should be the head of a future unity government.

At the same time, the former member of the Knesset doubts that Likud will meet Kahol Lavan's demand and give up Netanyahu, which means that the two parties are more likely to end up in a stalemate: "There’s still a chance of another election; it may not be that great, but at the moment, of course, this possibility cannot be ruled out", she believes.

Michal Cotler-Wunsh, a lawyer and former candidate from the Blue and White political alliance, emphasises that ideologically the two major parties "really don't have much of a distance between them".

"Blue and White and Likud could easily agree on 85 or 90% of the issues that would be raised and may come up with [a] Joint Platform in the next government if a unity government would form", she suggests.

According to Cotler-Wunsh, "the challenge is one on a personal level": "[First], Blue and White declared early, during the last election already that it would not sit with Benjamin Netanyahu as a prime minister that would possibly be under indictment", she says. "And [second] - I think the fact that Benjamin Netanyahu comes with this bloc, as I said, including the ultra-orthodox parties is challenging for Blue and White and the situation in which it declared or called for a secular unity government along Avigdor Lieberman".

The lawyer underscores that the vote results have clearly signalled to both Netanyahu and Gantz that the Israeli people wants "unity" and has an "intent to de-personalize the election campaign that has run for the second time in a row and its expectation of these two party leaders that should come together".

"Today, at Shimon Peres' memorial, Benjamin Netanyahu invited Benny Gantz to join him in a Unity Government", Cotler-Wunsh says. "I would posit that the location of this call can be regarded as especially meaningful - Shimon Peres did sit in such a unity government with Yitzhak Shamir, the two party leaders at that time were far more distant, ideologically speaking, than are Benjamin Netanyahu and Benny Gantz".

For his part, Yousef Jabareen, the head of the International Relations Committee of the Joint List, a political alliance of the Arab-dominated political parties in Israel (Balad, Hadash, Ta'al and the United Arab List), believes that the outcome of the September snap elections amount to a defeat of Prime Minister Netanyahu and his right-wing agenda.

"The strong showing of the Joint List at the polls may prevent Netanyahu from establishing an extreme right-wing government", says Jabareen. "Indeed, many in our community believed that Netanyahu could be defeated and contributed to achieving this goal".

The Joint List of Arab parties emerged as the third largest party in the Knesset, with 13 seats. On 18 September, The Times of Israel reported that the Joint List may recommend Benny Gantz for prime minister, citing Ayman Odeh, the leader of the Israeli-Arab political alliance. Odeh specified, however, that the Joint List has basic demands, including the resumption of the peace process between Israel and the Palestinians and an improvement of the conditions for Arabs in Israel.

"Voting patterns amongst the Arab community in Israel during the most recent election registered a significant increase in support for the Joint List", notes Jabareen. "This demonstrates that the Arab Palestinian public in Israel prefers a united political list and, accordingly, values unity and cooperation from their national leaders. This increase in mandates has boosted our political representation and improved our ability to achieve equality and peace, both locally and internationally".