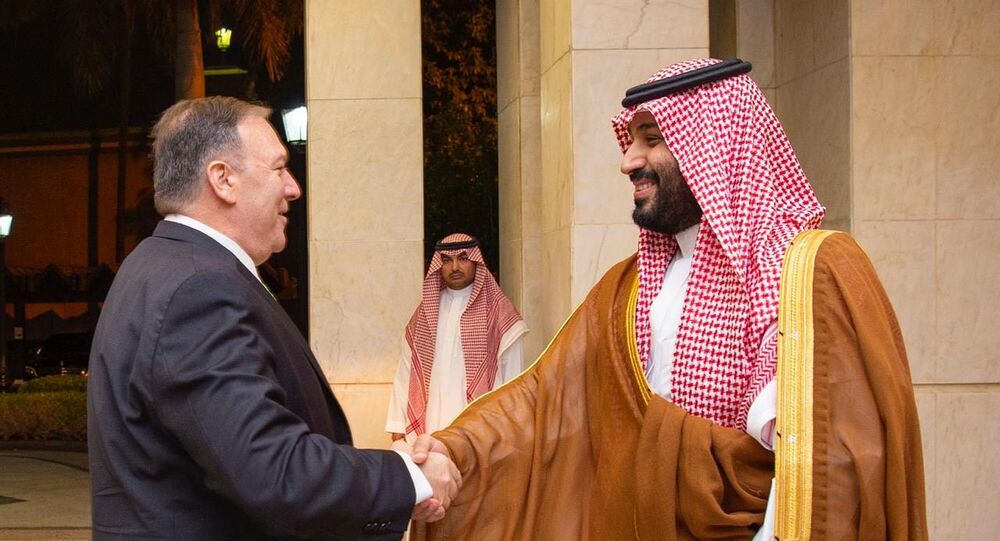 ‘What’s That Weaponry For?’ Saudis, US Blame Iran for Oil Attack They Couldn’t Detect or Stop

Despite a bevy of advanced Western-made military hardware in the region, neither the Saudis nor Americans detected Saturday’s attack on two of Riyadh’s oil facilities, Iranian scholar Mohammad Marandi told Sputnik. Despite this, American politicos are rushing to declare Iran’s guilt and begin a bombing campaign.

Even though evidence remains incomplete about who is responsible for the Saturday attack on Saudi oil facilities, several US officials and prominent Western media talking heads assert that they have it all figured out and have ratcheted up their rhetoric, decrying US President Donald Trump’s decision not to act militarily against Iran.

"We were blessed that there were no Americans killed in this attack,but any time you have an act of war of this nature, there’s always risk that that could happen,” US Secretary of State Mike Pompeo told reporters Wednesday.

Pompeo’s aggressive rhetoric is a definite turn from that of Trump, who did not want to initiate armed conflict and even specified to reporters on Monday that “this wasn’t an attack on us,” reported Reuters.

Interestingly enough, it appears that personalities such as CNN’s Jim Acosta are running with the same weak narrative that is being parroted by Wyoming Representative Liz Cheney, daughter of former Vice President Dick Cheney, who told MSNBC’s Chuck Todd that “it’s very clear this was the Iranians,” and that the US should conduct a “proportional military” strike against Iran for their alleged attack on the Saudi oil facilities.

An attendee at Bolton event confirms what @dlippman reported about the former National Security Adviser's comments. The attendee went on say Bolton told people in the room that the Trump admin is encouraging Iran's bad behavior by not responding to Tehran's provocations.

Marandi, an expert on American studies and postcolonial literature who teaches at the University of Tehran, joined Radio Sputnik’s Loud and Clear on Wednesday to discuss the so-called evidence that links Iran to the attack and give his thoughts on the role Western media may play when it comes to Trump’s response.

“Either … the Iranians haven’t been able to send weapons to Yemen, contrary to what the Saudis are saying, or if they have sent weapons to Yemen, then there’s no reason for them to launch attacks from Iraq or Iran,” Marandi told hosts Brian Becker and John Kiriakou.

“The Saudis have spent hundreds of billions of dollars on American and Western weaponry, and if they cannot track drones … then what’s that weaponry for?” he asked, questioning Saudi Arabia’s defense capabilities.

“And Americans, who have many bases in the Persian Gulf region and many naval ships, and their air force is very active: if they cannot monitor the air space in the region in a decent manner with all the equipment and expensive technology that they’ve brought with them, then what is their military doing in the Persian Gulf region in the first place?”

Marandi went on to point out that he is not convinced by the Saudis’ so-called evidence, and emphasized that “all they showed is a few bits and pieces of broken drones,” which he said could have easily been planted.

Rather than wondering about drones, the American studies expert said that Western media should be focused on asking why the Yemen War is still ongoing and work to put a halt to the unnecessary bloodshed.

If the Saudi coalition would cease “bombing weddings and schools and funerals and school buses” and “stop starving the people, then these attacks will stop,” according to Marandi.

“It’s as if those who’re opposing Trump are egging him on to war, simply because they despise him and he hasn’t initiated some conflict,” he added.

An example of this goading would be by CNN Chief National Security Correspondent Jim Sciutto, who asked a provocative and assumptive question to his Twitter followers in response to Trump declaring more sanctions against Iran. Kiriakou was quick to take the “CNN Newsroom” co-anchor to task.

If you have evidence--real intelligence--that Iran was behind the Aramco attack, then you should tell us. Otherwise, keep your neoliberal warmongering desire to send our young men and women into war to yourself.

“So they are saying you’re a coward or that you are inconsistent or you’re full of hot air, but by doing that, they are trying to push the United States towards military confrontation simply out of spite towards Trump,” Marandi concluded in agreement with Kiriakou.