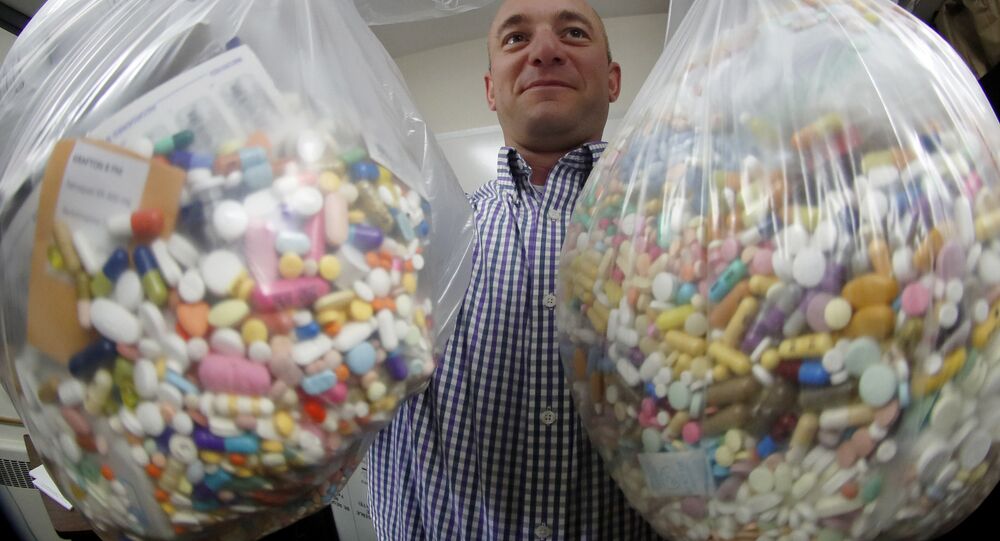 Purdue Pharma, the pharmaceutical company and maker of OxyContin, filed for bankruptcy after establishing a settlement to contribute some $10 billion to fight the opioid crisis in the US. However, many critics fear the funds won’t address the actual issue of addiction, leaving the door wide open for further deaths.

In an effort to avoid over 2,000 incoming lawsuits and litigation with two dozen state attorneys general, Purdue Pharma, led by the multi-billionaire Sackler family, filed for Chapter 11 bankruptcy protection on Sunday.

"This settlement framework avoids wasting hundreds of millions of dollars and years on protracted litigation, and instead will provide billions of dollars and critical resources to communities across the country trying to cope with the opioid crisis," Steve Miller, chairman of Purdue's board of directors, told NPR in a statement. The settlement will also mean the removal of the Sacklers as the company’s owners.

However, many judges and others feel that Purdue and the Sacklers, who continue to deny any wrongdoing or personal contribution to the US opioid epidemic, are attempting to put a band-aid over a bullet wound.

“Whether through bankruptcy or Connecticut courts, we will hold Purdue and the Sacklers accountable for the pain and suffering and death they have caused here and across the country,” Connecticut Attorney General William Tong said in a September 16 statement. “They have had opportunity after opportunity to do the right thing and begin to make amends for the damage they have done, yet time after time they choose greed.”

NPR reported Monday that 26 states have already opposed the settlement, and each refuses to take their foot off Purdue Pharma’s neck in court.

Sheila P. Vakharia, deputy director in the Drug Policy Alliance’s Office of Academic Engagement, joined Radio Sputnik’s By Any Means Necessary on Monday to discuss how the US should view overdoses and provide details on ways to effect change in response to the opioid epidemic and substance addiction in America.

Despite the fact that roughly 60% of the estimated 68,500 overdose deaths reported by the Centers for Disease Control and Prevention in 2018 were driven largely by opioids, Vakharia told hosts Eugene Puryear and Sean Blackmon that it is still important to keep our eyes on additional substances.

“We focus too much on a class of drug rather than the outcome, which is what we should be concerned about - the overdose deaths,” Vakharia claimed.

That said, in assessing how to combat overdose death rates in the US, it’s important to first identify the upstream social determinants of health (SDOH), which she identified mass incarceration and mass criminalization as being huge factors of.

According to a 2018 substance abuse and addiction study by Drs. Tyler Winkelman, Virginia Chang and Ingrid Binswanger, the correlation between opioid use and criminal justice system involvement is extremely high. The researchers even stressed that the findings in their cross-sectional analysis of the national data should be taken into account when making “changes to public health insurance programs and sentencing guidelines.”

A more recent study, co-authored by five researchers at the UNC-Chapel Hill Gillings School of Global Public Health and two representatives of the North Carolina Division of Public Health and Department of Public Safety, revealed that in North Carolina alone, those incarcerated were around 40 times more likely to die of an overdose after being released. Researchers stressed that those caught in the criminal justice system “need urgent prevention measures” built into their sentencing and probationary periods.

Another avenue for change can be found within syringe exchange programs (SEPs) so that those who use drugs intravenously can get fresh needles and “reduce the likelihood of catching blood-borne infections like HIV and Hepatitis C, but also [SEPs] are a way to get the highest risk users to engage with care and get access to naloxone,” Vakharia explained.

Naloxone, known more commonly under the brand name “Narcan,” is an emergency medication that can reverse narcotic overdoses. The US Centers for Disease Control and Prevention notes that while state co-prescribing laws have made strides in pushing physicians to prescribe the opioid antagonist, “more work needs to be done, particularly in rural counties.”

“We know that people who use drugs are often the first line of defense when someone has an overdose, so we need to make sure that the highest risk users have access to this life-saving medication,” Vakharia added.

Australian Police Seize 1.6 Tons of Meth in Largest Ever Bust