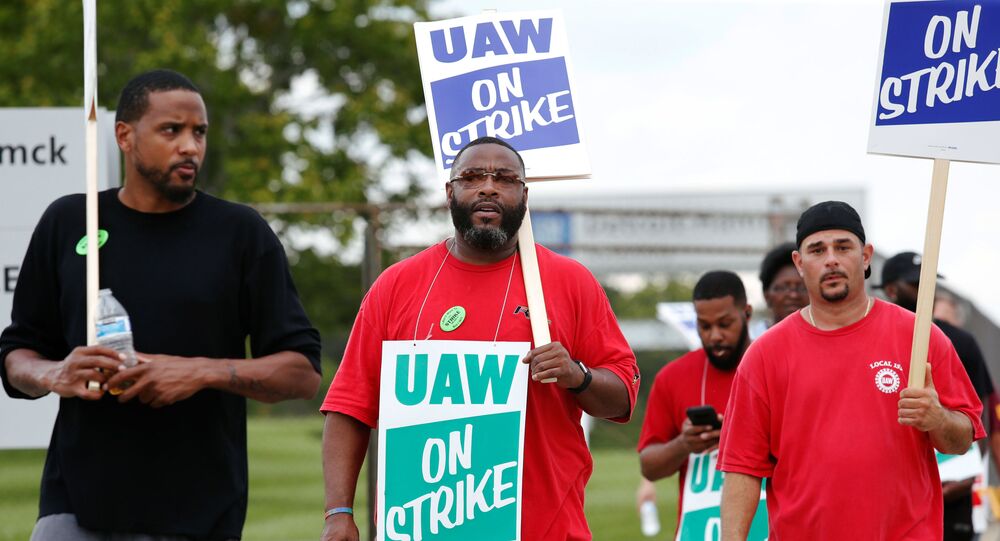 Following the 2008 US recession, the US government paid $50 billion to bail out GM in 2009, saving around 1.5 million jobs, according to Good. As a result of the government bailout, the UAW agreed to pay new employees less money than veteran workers, establishing a two-tier pay scale. However, the union is now demanding that GM reopen idled plants, add jobs at other factories and narrow or close the difference between pay rates for new hires and veteran workers. The union is also seeking permanent employment for temporary workers.

“Just to kind of recap what has happened over the last 10 years, 2007, [200]8 and [200]9, there was a huge bailout of the auto companies. At the time, the union did accept major concessions, which were very controversial at the time … which [included] tiered salaries and … much higher levels of temporary workers who don’t have the same kind of job security and wages as the regular UAW GM workers. One of the big pushes since then [has been] to equalize the benefits for all the workers, so everyone has equal pay for equal work and there isn’t this two tier system,” Sweeney told hosts John Kiriakou and Brian Becker.

GM, however, is insisting that its employees cover a larger share of their healthcare costs and increase their work productivity and flexibility in factories, despite the fact that the company made about $12 billion in profit last year, according to Sweeney. The union has also been urging GM not to shut down car assembly plants in Ohio and Michigan.

“Employers try to split the workers into at least two, sometimes three, four different tiers. Even through the workers try to stick together, there are material forces that kind of [pit] them against each other … GM is making massive, massive profits. Just last year, they [made] $12 billion in profit. And their CEO Mary Barra was paid $20.87 million,” Sweeney explained.

The strike comes as UAW’s four-year contract with GM expired Saturday. It is the largest strike by any union in the US since the last GM strike in 2007, which involved 73,000 workers.

Sweeney told Sputnik that workers from 55 facilities had walked out on strike, “not just the Midwest but also Missouri, Texas. There’s facilities out here in California and Nevada.” He also noted that although the number of UAW workers is not as high as it was in the 1960s and 70s, the strike could “cause major impacts on the economy.”

“The strike is back. We saw it with teachers. We saw it with service workers, airport workers, hotel workers. To turn the rights for workers around, to stop the growing spread of income inequality, to move toward a more progressive future … to get [US President Donald] Trump out of the White House, unions have to be at the forefront of that; and for unions to make massive gains, that means massive strikes. We should do everything we can to support these workers,” Sweeney noted.

In a statement Sunday, GM said that it presented the union with a “strong offer that improves wages, benefits and grows US jobs in substantive ways and it is disappointing that the UAW leadership has chosen to strike at midnight tonight. We have negotiated in good faith and with a sense of urgency. Our goal remains to build a strong future for our employees and our business,” the statement says, the Washington Post reported. GM’s offer included the promise of building a new all-electric pickup truck at a Michigan factory, as well as an electric vehicle battery plant in Ohio.

However, GM spokesperson Brian Rothenberg said Monday that the two sides have only agreed on 2% of the contract.