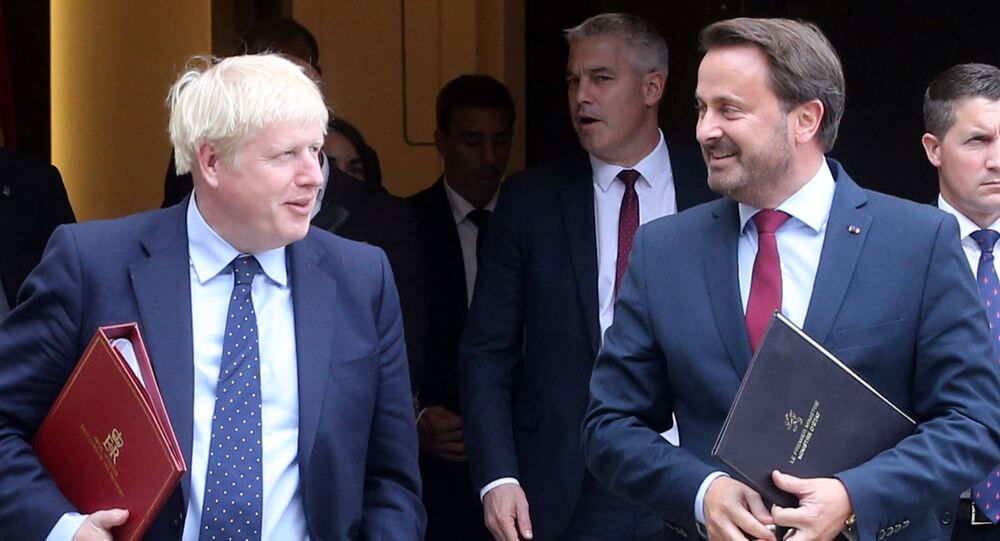 British Prime Minister Boris Johnson has met with European Commission President Jean Claude Juncker, as both the UK and EU aim to make last-ditch compromises, and potentially agree upon a revamped Brexit deal.

Johnson has come under fire from many within the House of Commons in recent weeks, who claim that he is not taking negotiations with Brussels seriously, is dead set on delivering a no-deal Brexit, and that his decision to prorogue parliament was undemocratic. Mev Brown, Chief Spokesman for SDP Scotland, reflects on whether the further discussions between the bloc and Westminster prove to be a waste of time after the EU powers have repeatedly outlined that they will not bend on issues such as the Irish backstop.

Sputnik: Do you think that much will come of the talks between Boris Johnson and Jean Claude Juncker? Is the EU ever going to give the UK a mutually beneficial trade deal?

Mev Brown: I really don’t see how anything can come from the meeting. The flaws with any trade deal that could be negotiated between the UK and the EU at this time, would mean that we would basically have to go back to square one.

As a Brexiteer, the problems I had with Theresa May’s withdrawal agreement, was that it locks us into the single market, into the customs union, and into the European Court of Justice, and we’d have to fork out forty-nine billion for the privilege of leaving, and those are just the headline issues; it was the worst deal imaginable.

I honestly don’t understand how British negotiators could have negotiated such a terrible deal, generally speaking, it was often referred to as Brexit in name only, as for all practical purposes we would be locked into all the core EU structures, so how you could call that Brexit is a total mystery to me.

I personally don’t have great hopes, and as a Brexiteer, I am comfortable with a WTO-rules Brexit, as even with all the trade deals we have with the EU, we still deal with most of the world under these regulations, so there’s no real concern.

The only caveat I would add to that is regarding the supply chain, so in that regard what I would look for is a one-line trade deal whereby if a good was being imported or exported from the EU; then it should be exempt from tariffs because parts can pass across the border several times.

If you have that caveat, that one line trade deal, that really takes away the big issues for many businesses and beyond that, the advantages of British cars becoming more competitively priced in Europe is a good thing, and BMW drivers paying ten per cent more for their vehicle... there are worse things in life than that.

© AP Photo / Olivier Matthys
European Commission President Jean-Claude Juncker, center right, speaks with the media as he shakes hands with British Prime Minister Boris Johnson prior to a meeting at a restaurant in Luxembourg, Monday, Sept. 16, 2019

Sputnik: Do you think that the UK will leave the EU by the end of October? Would a no-deal Brexit be as bad as many pro-remain MPs claim?

Mev Brown: If Boris can magically negotiate a deal, which I don’t expect, it’s possible. Beyond that, the way I see the political landscape lying is that the 'rebel alliance' will not agree to a general election until the 1st of November or later and beyond that everything is negotiable, so I don’t see us leaving by Halloween. I think there will be a general election, and what happens after depends on the result of it.

Sputnik: Do you think the Conservatives would win the next general election? What is your take on the likes of the Lib Dems openly calling to cancel Brexit?

I do see the Lib Dems advancing; if there’s one thing the British public don’t like, it’s confused politicians. The position of the Labour Party is completely incoherent, their basic position is to go to Brussels, negotiate a deal, then come back and campaign against it. I think most people would accept that as just being a ridiculous position to have.

The Lib Dems position is clear, I don’t agree with it obviously; but it is clear and that will appeal to a lot of people, particularly Labour voters in the south who are pro-remain. I think the problem for the Labour Party north of the [Scottish] border, is that a lot of leave supporters will switch to the Brexit Party and the Conservative Party.

Regarding the outcome; everything is up in the air, as we still don’t know what Brexit looks like, and many people are against a WTO rules Brexit and the remain camp is very vocal and active and very energised. As far as 'project fear' is concerned, there are aspects of it in the debate it has to be said, people on the news have said that cost overruns in the NHS are the fault of Brexit, but I just don’t buy that.

For many floating voters, the big issue is whether they are going to be better off or worse off, and it all comes down to whether you believe the treasury forecast, which suggests that half a million jobs would be lost and that the UK’s economy would under-perform for many years to come, now if you believe that; common sense would suggest you vote remain, but if you don’t believe it common sense would suggest you vote for Brexit.

I don’t believe it, the treasury has forecast before that if we even voted to leave; half a million jobs would be lost, and the UK would go into recession, the reality was that we added about half a million jobs and the British economy ticked over nicely.