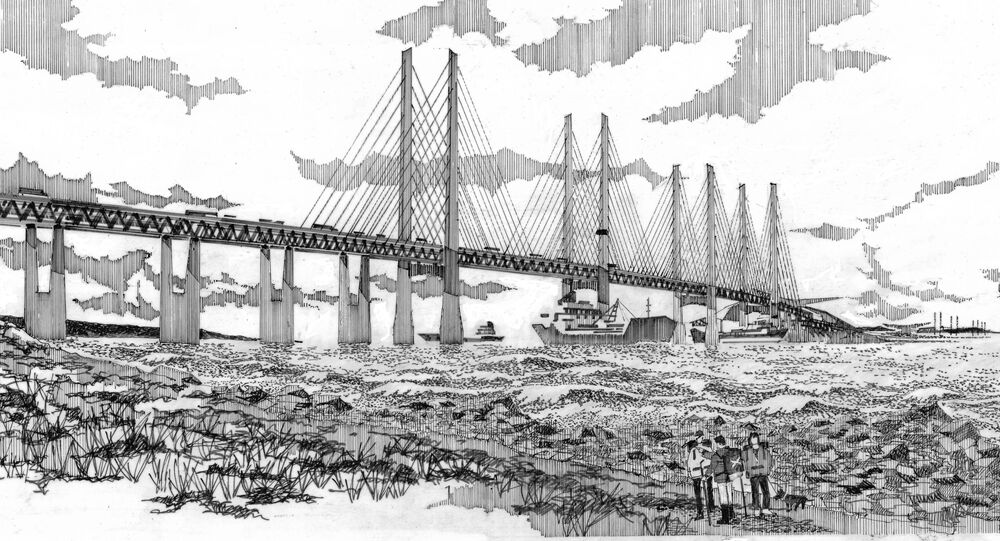 UK Prime Minister Boris Johnson said earlier this week it "would be very good" to build a bridge from Scotland to Northern Ireland. Sputnik spoke to Professor Alan Dunlop, the architect who first suggested the £15 billion bridge.

Boris Johnson has reportedly commissioned a feasibility study to look into the building of a bridge from Portpatrick in Scotland to Larne in Northern Ireland.

Channel Four News reported this week the Treasury and the Department for Transport have been asked about the risks and the cost of a permanent link between two most northern parts of the United Kingdom.

When Mr Johnson praised the idea this week he was immediately trashed on social media by critics who highlighted his record of backing outlandish engineering projects which never get built.

While Mayor of London he spent millions of pounds of taxpayers' money on feasibility studies into a Garden Bridge across the Thames and a new airport on reclaimed land east of London, which was dubbed "Boris Island".

When he was Foreign Secretary, Mr Johnson even floated the idea of building a bridge across the English Channel to France.

Professor Alan Dunlop, the architect who came up with the idea of a bridge between south-west Scotland and Larne, near Belfast, has welcomed the feasibility study and is convinced the doubters can be proved wrong about what he calls the "Celtic Connection" bridge.

He said: "The bridge would be 26 miles long but the longest sea bridge in the world has just been built in China and it's 34 miles long, linking Hong Kong with Macao…sea bridges in China have been designed and built to withstand typhoons and any amounts of difficult weather, so there is currently potential around the world to show that there’s a real possibility that such a structure could be built".

Prof. Dunlop said: "We have in Scotland, England and Ireland we have architects and engineers who are capable of rising to the challenge of building this structure which spans over the north Irish Sea, I have absolutely no doubt about it. (Sir) Norman Foster, a great English architect, has just constructed the Millau viaduct over the River Tarn (in France), which towers higher than the Eiffel Tower".

One of the biggest problems facing engineers could be Beaufort’s Dyke, a trench in the Irish Sea where a million tonnes of weapons and munitions were dumped at the end of the Second World War.

Prof. Dunlop said: "Beaufort's Dyke is 30 miles long, two miles wide and 300 metres at the centre, its deepest point. The bridge would span to the north of the dyke where it narrows. The possible solution to that is a floating bridge, developed by the Norwegian Coastal Highway project. The floating bridge can span over trenches 500 metres and fjords 21km wide".

He said whether the bridge project gets off the ground may depend on politics and whether Mr Johnson remains as prime minister.

Prof. Dunlop said: "There is calls for a feasibility study by Boris Johnson's office. I hope that is carried out but so much seems to be in flux at the moment because of the political situation. I genuinely don't know what the next step might be".

Mr Johnson is thought to believe the bridge would be a way of permanently linking Northern Ireland geographically as well as politically with the rest of the United Kingdom and also discouraging Scotland from leaving the union.

But he will only stay in office if he can win a general election later this year, having pushed through Brexit, which he vowed he would do by 31 October.

The United Kingdom voted to leave the European Union in 2016 but the withdrawal was delayed several times.

After then-Prime Minister Theresa May failed to come up with an acceptable plan to leave the bloc by 29 March of this year, the deadline was moved to 31 October.

Views and opinions, expressed in the article are those of the author and do not necessarily reflect those of Sputnik