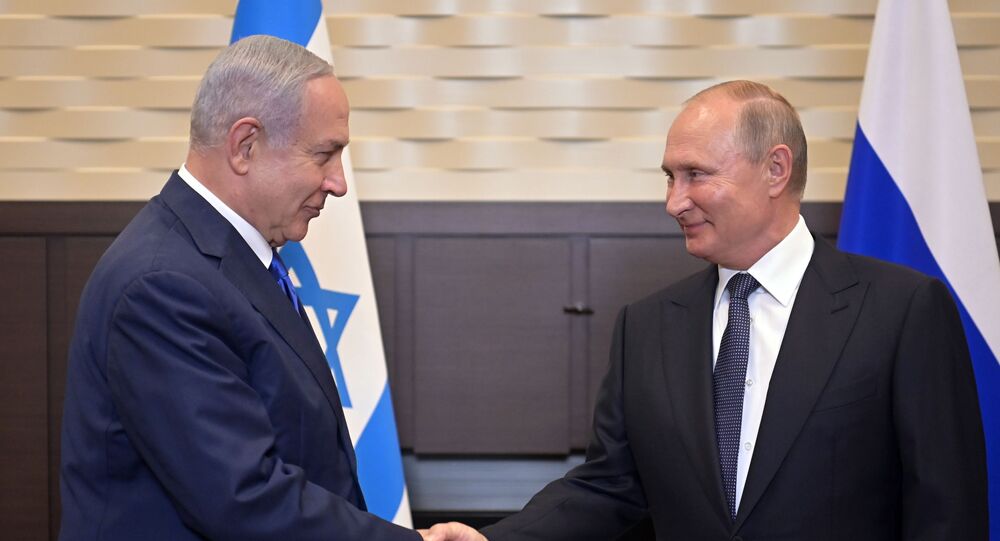 On Thursday, Russian President Vladimir Putin met with Israeli Prime Minister Benjamin Netanyahu in Sochi. The visit was announced just one week ago and comes mere days before snap Knesset elections in Israel.

A number of experts have shared their opinions on Israeli Prime Minister Benjamin Netanyahu’s visit to Russia that took place Thursday. The experts speculated about what issues were discussed behind closed doors and whether the visit itself was purely a PR stunt or was caused by actual diplomatic issues at hand.

According to Gilead Sher, an Israeli attorney who served as Chief of Staff and Policy Coordinator to former Israeli Prime Minister and Minister of Defence, Ehud Barak, Netanyahu came to Sochi, first and foremost, to demonstrate his personal political significance ahead of upcoming elections.

“One of the main themes in Netanyahu’s election campaign is highlighting his achievements in the international arena as well as his personal relationship with other leaders", he said.

Ely Karmon, a senior research scholar at The International Institute for Counter-Terrorism and senior research fellow at the Institute for Policy and Strategy of The Interdisciplinary Centre in Herzliya, Israel, while agreeing that the visit was intended as a political PR stunt, said the prime minister actually had a number of issues related to Israel’s national security to discuss with Putin – in particular the “situation in Syria, the position of Russia on the Iranian presence in Syria and Israeli military activity against Iranian targets".

“The fact that [his visit] was decided at the last moment and before the elections clearly shows intent [to win voters’ support]. He hopes this visit will help him to win the votes of Russians who immigrated to Israel", he said, but added that “there are very serious issues between Russia and Israel at this moment".

Many of them prefer former Defence Minister Avigdor Lieberman [leader of the party Yisrael Beiteinu, which is in a bitter fight with Netanyahu’s Likud].

Gabriel Ben-Dor, Head of the National Security Studies programmes at the University of Haifa, also opined that the visit had a dual purpose. He, however, outlined several key points regarding Syria: military coordination with Russia in a bid to avoid direct confrontation between the two armies and the future of Syrian politics after Russia's withdrawal.

He opined that Netanyahu is concerned about “political future in Syria – what kind of regime will it be, what will be the future of Syria after Russia withdraws its troops?”

He also said that Israel wants to come to an understanding with Russia regarding Tel Aviv’s opposition to Iran.

“Israel […] would like to have Russia’s understanding in various efforts being now undertaken in that direction", he said.

Ben-Dor added that Donald Trump’s inclination towards talking with the Iranian government must have made Netanyahu nervous.

“Given the fact that US President Donald Trump might launch a new initiative trying to meet with the Iranian leadership, Israel and Russia have a joint interest in trying to see what that means to both countries", he said.

“It will probably not have a significant effect, but if it does, it will be positive", Sher said.

On the other hand, Dr Harel Chorev, head of the Desk for Middle Eastern Network Analysis at the Dayan Centre, opined that the political significance of the visit should not be underestimated.

“I think Netanyahu's good relations with [Putin] are a source of electoral power for the Likud, definitely", Chorev said. “No one denies the fact that Putin's friendship with Netanyahu is beneficial for Israeli interests. It also places Netanyahu as an important world leader".

His opinion was echoed by Gabriel Ben-Dor, who says the visit has come at the right time. According to Ben-Dor, the visit will boost Bibi’s support among Russian emigrants and portray him as a “world-class statesman” who manages to maintain good relations with many key world leaders at the same time.

“This visit came at the right time, there are only five days before the election", he said. “So it is really a last-minute effort to enhance Netanyahu’s prestige and general sort of salience in the Israeli diplomatic arena to portray Netanyahu as the outstanding statesman in Israel and the only one of that stature in the world".

The visit, however, may actually backfire on Netanyahu, and therefore the outcome of this diplomatic effort is hard to predict, says Ely Karmon.

“Let’s see how it will work in the end. Nobody knows for sure how it will affect the outcome", he said. “This meeting can be useful or it can boomerang on him".

The experts speculated about the details of what actually happened behind closed doors, particularly focusing on Syria. They agree that the issue of Iran’s alleged military presence in Syria must have been on the table, claiming that this purported military presence is not only a perceived threat to Israel, but also a destabilising factor for Russian efforts in the Arabic Republic.

“We can anticipate a revival of momentum for finding a stable, long-term, permanent solution for Syria, which will call for the withdrawal of foreign forces, such as the massive Iranian presence in Syria, which is not good for anybody", Gabriel Ben-Dor said, arguing that reported Iranian presence is threatening for Israel, but is also a problem for Turkey and even a for the Syrian regime itself.

“[Assad] would like to be in charge of his own affairs and to run his country in its own way - and the Iranians with their massive presence in the country do not allow for that", he opined.

Ely Karmon argued that Iran's alleged military presence in Syria may also be bad for Russia’s efforts to act as a guarantor of stability in Syria.

“[Iran’s] deep involvement in Syria is destabilising what Moscow wants to achieve – consolidation of Bashar Al-Assad’s regime - and Russia’s desire to serve as a guarantor of stability in Syria. Iranian activity and activity of militias Tehran sends undercover – Iraqi militia, Hezbollah – all this destabilises the situation in Syria", he said. “The Iranian entrenchment in Syria is not of interest to Russia. I think there is a conflict of interests in some way between Tehran and Moscow".

However, according to Gilead Sher, the meeting is unlikely to bring significant changes in existing policies towards Syria either from Israel or Russia

“I believe that the modus vivendi and the understandings will not change but rather undergo a periodic fine-tuning", he said.

Views and opinions, expressed in the article are those of the experts and do not necessarily reflect those of Sputnik.