A new study led by scientists at the University of Texas at Austin supports the theory that a giant asteroid hit the planet 66 million years ago, wiping out the dinosaurs and about 75% of life on Earth at the time. Studying how the event rapidly changed Earth’s climate has lessons for today, too, the lead researcher told Sputnik.

Dr. Sean Gulick, research professor at the UT-Austin, specialist in the role of catastrophism in the geologic record and author of the new study, joined Radio Sputnik’s Loud & Clear Thursday to discuss how the research findings confirm the impact a single event in history can have on the evolution of life.

In the study, published in the Proceedings of the National Academy of Sciences on Monday, researchers examined rocks in the Chicxulub asteroid crater underneath the Yucatán Peninsula in Mexico. The crater was formed when a large asteroid, known as the Chicxulub impactor, slammed into the Earth millions of years ago. The catastrophic event is believed to have triggered wildfires and a tsunami.

“As part of the International Ocean Discovery Program, we basically got the funding to use something called a lift boat, which kind of lifts itself above the water, in this case about 45 or 50 feet above the water, and we put a mining rig on this lift boat and used it to drill down into the sediments that bury the Chicxulub crater in the Yucatán,” Gulick told host Brian Becker. 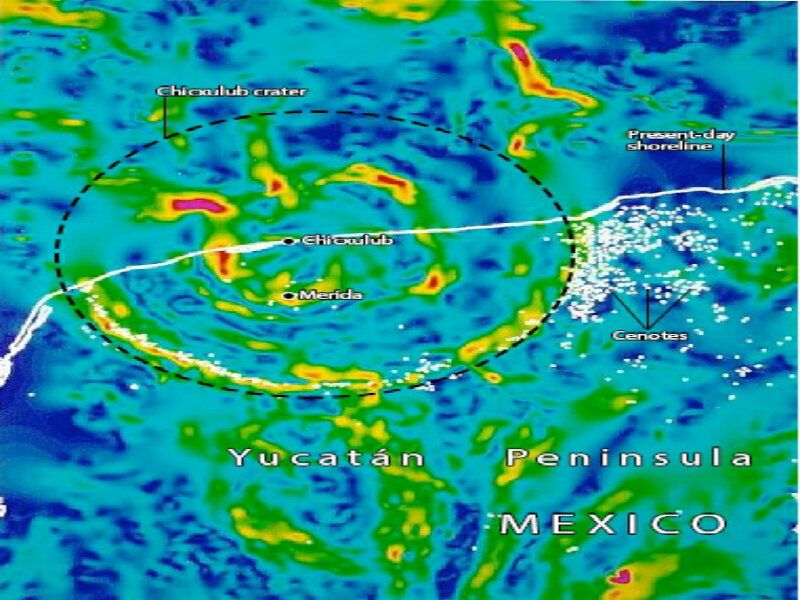 NASA
Topological features of the Chicxulub crater can be seen in this gravity map (red and yellow indicate high gravity, while green and blue are gravity lows).

“And we drilled down about 500 meters before we started collecting rock [samples] about 10 feet at a time, and we went down all the way through [different geologic rocks] - so from about 50 million years ago all the way back until we reached the crater rocks themselves, about 66 million years ago. And then the really exciting thing was … [at] about 130 meters of core [we found rocks that] turned out to represent a single day in the Earth’s history. At the bottom of this pile of rocks, we find melted rocks that today look like glass that would have been formed near instantaneously with the asteroid colliding. Above that, we actually find broken melted rocks, which we think are when the oceans began rushing back into the newly formed crater,” Gulick told Sputnik.

“Estimates at how long it would take for the water to come back in again are about 30 minutes. And when that water would rush back in and hit those molten rocks, it would have actually exploded. That would have left another 20 or so meters of rock, but then the water would have kept coming and totally flooded the crater, filling it so that the ring of mountains that we drilled into [in] the center of the crater would have been buried by about 2,000 feet. There, we actually find another whole sequence of hundreds of feet of rocks, where the largest chunks are at the bottom and the smallest particles are at the top. That only happens in water, so we can say that would have taken many hours for all of those particles that were kicked out of the crater to have actually settled into a big pile,” Gulick said.

“At the very top of it, we actually find the tsunami that originally left the crater when it first formed had actually reflected off of land far away, perhaps 500 miles way, and bounced back and come back into the crater, leaving a layer of gravel at the very top of this whole pile,” he explained.

The findings confirm that the asteroid triggered a tsunami that caused rock and dirt, some 425 feet of material in all, to fill up the crater.

“What we have is an example where a single event totally changed the course of evolution on Earth. We have an asteroid hitting an area that released a lot of carbon dioxide and particularly a lot of sulfur from the impact. The vapor plume would have risen up into the upper atmosphere, and that sulfur would have combined with water and made what we call sulfate aerosols … and that would have caused a global cooling event that, right after the wildfires, would have then basically spelled the end of the dinosaurs,” Gulick explained.

While the area surrounding the impact crater is full of sulfur-containing rocks, no sulfur was actually found in the core taken from the crater, supporting the hypothesis that the asteroid impact caused the sulfur-containing minerals at the impact site to vaporize. The release of sulfur into the atmosphere could have caused sunlight to be reflected away from Earth, resulting in a cooling of Earth’s climate.

“If you extend that today and you think about people who like to argue you can’t affect the Earth, it’s simply too big - well, I think we have a great example to say if you release enough contaminants, if you change the atmosphere quickly enough, you can change the Earth, and you can even cause a mass extinction event. So, I think it is a lesson for today,” Gulick explained.

The research also determined that the asteroid strike was a phenomenon that affected the entire globe.

“How do we know it’s a global event? It turns out that for as long as people have been studying the Earth’s rock record, if you will, they’ve discovered that there’s an unusual layer, right at the end of the Cretaceous, right at 66 million years ago, that you can find everywhere on the Earth [where] we have rocks of that age. And it was actually back in the early 1980s [that scientists] measured some evidence of cosmogenic inputs into the sediments,” Gulick explained. “And it turns out they found the element iridium in very high levels that cannot happen naturally on Earth and only come if you bring large amounts of iridum from space.”

“So, they originally came up with the idea back in 1980 that the extinction of dinosaurs may have been caused by an asteroid, and it turned out - fast-forward 40 years - that we have lots of evidence now it was truly a global event and a calamitous event from a single asteroid strike.”