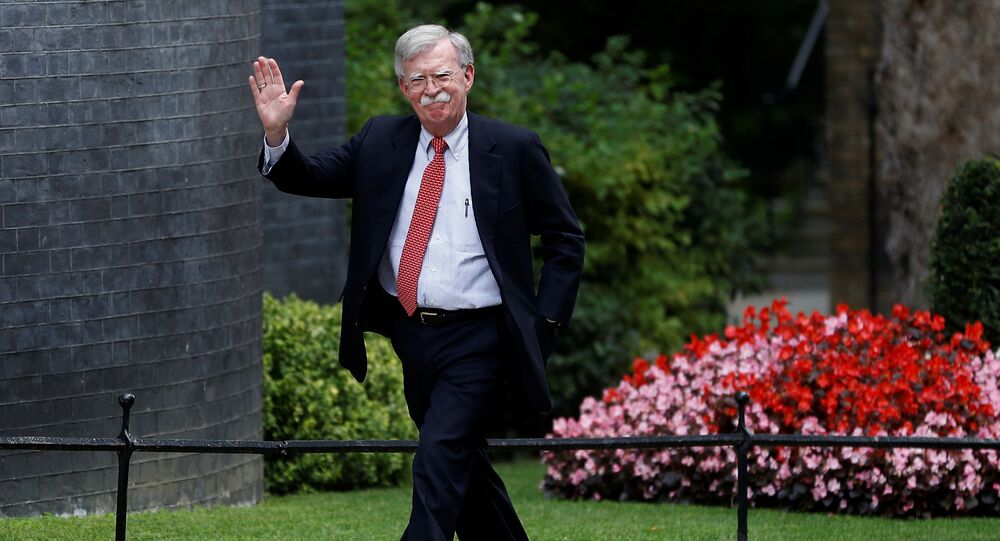 While many would expect members of the mainstream US media and left-leaning politicians to be celebrating the firing of a war hawk such as former National Security Adviser John Bolton, headlines and commentary on his departure seem more an open-arms embrace for the sake of maintaining an anti-Trump narrative.

According to a Wednesday report from CBS News, Bolton’s loose lips with the press may have been his ultimate undoing. Citing three sources “directly involved,” the outlet said that US President Donald Trump believed Bolton, or someone close to the former national security adviser, was the one who informed the press about his alleged inquiry about using nuclear weapons against an incoming hurricane.

The National Oceanic and Atmospheric Administration, which has a frequently asked questions section on its website explaining why nuking a hurricane would be bad for the entire planet, says the question has been around for decades, but Trump was quick to dub the reports originally published by Axios as “just more fake news.”

While it’s unclear whether Bolton was the one to spill the beans on bombing the hurricane, he wasted no time contacting various news outlets and reporters just as they were breaking their stories on Trump’s Tuesday tweet announcing Bolton’s departure from the White House.

Ambassador Bolton sends me a text message just now: “Let’s be clear, I resigned, having offered to do so last night.”

Bolton also sent a text message to The Daily Beast, saying their reporting on how he left the administration was “flatly incorrect.”

Joe Lauria, editor-in-chief of Consortium News and author of the book "How I Lost, By Hillary Clinton," joined Radio Sputnik’s Loud and Clear on Wednesday to take a few change-of-heart culprits to task following Bolton’s firing and detail the former adviser’s history.

“It shows how deep party politics partisanship is running things,” Lauria told hosts Brian Becker and John Kiriakou about the recent corporate media coverage and politicians' comments on Bolton. “They just want to get Trump on any way they can.”

House Speaker Nancy Pelosi in particular appeared somewhat concerned about the departure of Bolton, despite having been very critical of his former actions, including his delivery of an invitation for Russian President Vladimir Putin to visit the US back in 2018.

“John Bolton's sudden departure is a symbol of the disarray that has unnerved our allies since day one of the Trump Administration. Steady leadership & strategic foreign policy is key to ensuring America’s national security,” Pelosi said in a Tuesday tweet.

Lauria went on to assert that Pelosi and other Democrats mourning the former national security adviser’s departure “know the truth: that Bolton was a disaster and this is a very good move for the United States and the whole world. But they care more about the 2020 [presidential] election.”

The Consortium News EIC also highlighted that this is the same Bolton who has staunchly opposed the United Nations for decades and even said during the Global Structures Convocation in 1994 that if the UN building in New York lost “10 stories today, it wouldn’t make a bit of difference.” He also declared that the UN did not even exist and “would be a failure if the United States did not participate.”

“That was proven when [the US] went to war in Iraq and invaded Iraq without a UN resolution. The UN, for them, was just an obstacle to be gone around, and they’re gonna do whatever they want,” Lauria explained. “To me, he typified the pathology of American power. He’s only different than others in the purity of the form that he expresses himself.”

That purity continued through 2018, when Bolton made similar statements about how the US withdrawal from the UN Human Rights Council was an “assertion of American determination to stick by its Constitution,” which was necessary to establish the US’ own dominance and push back against the notion of “some higher authority.”

.@AmbJohnBolton: Getting off the UN Human Rights Council is an assertion of American determination to stick by its Constitution and not to recognize a higher power to judge our performance pic.twitter.com/ljCgt5cEAP

Lauria said that unlike Representative Alexandria Ocasio-Cortez (D-NY), who celebrated Bolton’s departure, Pelosi continues to “looking for a way to undermine Trump.”

“This is beyond irresponsible,” he expressed concerning the speaker’s actions. “And of course, corporate media just reflected that. CNN had a most ridiculous article this morning. It was just so poorly written and thought out, but it was essentially just copying [Pelosi’s] notion.”

Lauria concluded by stressing that “for the moment, we can breathe a little bit easier [because] John Bolton is no longer the head of the National Security Council,” but he also noted that “we have to worry about who [Trump] will choose next.”

Netanyahu Says He Expects the US to Stay 'Very, Very Tough' on Iran After Bolton’s Exit