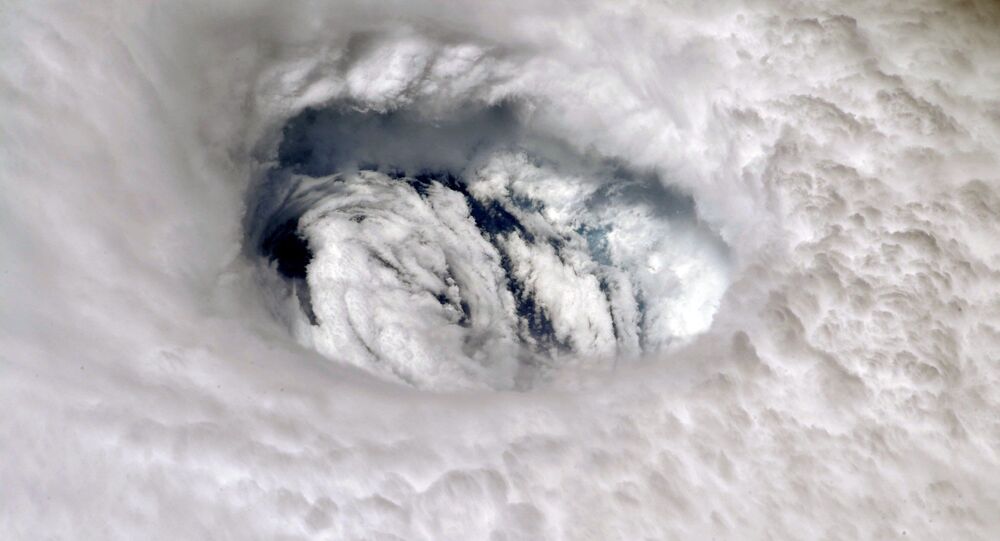 Hurricane Dorian, which hit the Bahamas on 1 September with 185 mph winds, has technically diminished from a Category 5 to a Category 1 hurricane, before moving away northeast towards North Carolina on Friday. After assessing the results of the hurricane, analysts have been looking at ways to cope with similar climate disasters.

On 5 September, Hurricane Dorian brought heavy rains, strong winds and tornadoes to the Carolina coast leaving more than 200,000 people without power. Despite being downgraded to Category 2 on Thursday morning it was still dangerous, resulting in the closure of airports and harbours in the region.

But as Dorian slowly loses steam the question arises as to how early one can predict a natural disaster and its direction.

"A catastrophe arising from natural causes is a 'declared disaster' based on number of deaths and a declaration by a state and/or federal authority," says Dr Waheed Uddin, a professor, consultant, and former UN expert. "In the case of Hurricane Dorian in this first week of September 2019 on the south Atlantic coast of the US, disasters have been declared for all counties of Florida and affected counties in other states by the respective State Governors and the White House."

"NASA/NOAA satellites series GOES are used to scan the tropical storm and monitor the hurricane path in real time helping to predict the trajectory path and its impact zone" which helps "the state and local authorities to provide adequate warning to the affected population, mobilise emergency personnel, and execute emergency management plans," Uddin said.

But he added that "there is no universal weather or climate model that can predict precisely what category of tropical storm or hurricane will impact when and it's precisely location of landfall."

At the request of Senator Thom Tillis, I am getting the North Carolina Emergency Declaration completed and signed tonight. Hope you won’t need it!

Peter Gleick, an American scientist working on issues related to the environment, says that "scientists are getting better and better are forecasting and seeing hurricanes in advance."

"Each year, an estimate of how many hurricanes may form in the Pacific is issued, and our satellites and other remote sensing now sees tropical storms and hurricanes form very early, given more and more advanced warning to areas threatened," Gleick says. "There is still, and will always be some uncertainty about strength, speed, and direction of hurricanes, but emergency planning for them has greatly improved in recent years."

As of July 2019, there have been six weather and climate disaster events which each cost the US over $1 billion, according to the National Centers for Environmental Information (NCEI). In 2018 the cost of US disasters amounted to $91 billion with only 2017, 2005 and 2012 being more expensive.

In 2017, the total economic loss from hurricanes Harvey and Irma reached $125 billion, while in 2012 Hurricane Sandy and 2005 Hurricane Katrina exceeded $100 billion each.

Natural disasters usually have a dramatic human and economic impact resulting in multi-million dollar losses: so far, Dorian has claimed the lives of 30 people and could cost the Bahamas $7 billion in insured and uninsured losses, as Bloomberg reported Thursday, citing catastrophe insurance specialist Karen Clark & Co. According to the National Hurricane Center, Dorian has become "the strongest Atlantic hurricane landfall on record with the 1935 Labor Day hurricane".

The eye of #Dorian has made a second landfall at 2 pm EDT (1800 UTC) on Great Abaco Island near Marsh Harbour. Maximum sustained winds were 185 mph at the time. This is tied for the strongest Atlantic hurricane landfall on record with the 1935 Labor Day hurricane. pic.twitter.com/O9hrotTTbS

​"This tragic event reminds us to question that where should be the priorities for international disaster aid," said Uddin. "One of the United Nation’s priorities is for year 2100 climate change speculations of carbon dioxide induced global warming hypothesis that has not been proven by physical evidence."

According to Uddin, the UN-operated Green Climate Fund bank should provide $500 million from its "climate fund" to help communities in the Bahamas and build disaster resilient infrastructure assets.

American scientist Peter Gleick holds a different view, and believes that the best way to address the natural disaster issue and cope with losses is to act proactively and focus on the climate change problem.

"The smartest investment is to reduce the risk of disasters, rather than to have to respond to them after they happen," says Gleick. "This is 'prevention' rather than 'response'. For example, we must slow the rate of climate change, or extreme events will become stronger and more frequent. The costs of reducing emissions of greenhouse gases are far less than the cost of failing to do so and paying for the consequences."

In June 2019, the US Congress passed a disaster relief bill envisioning the provision of more than $19 billion to US regions that had been hit by natural disasters. However, judging by the record of previous disaster events in the country in years 2018, 2017, 2012 and 2005 the sum seems likely to be insufficient.

Uddin echoes Gleick by saying that "the Congress can process a special supplementary aid bill like in the case of the 2017 Hurricane Maria disaster of Puerto Rico."

Gleick is warning that "the costs of disasters are growing," urging American politicians "to pay more attention to addressing climate change, extreme events, and the growing risks of human disasters." Uddin, meanwhile, has outlined a roadmap which, in his view, can help tackle the problem.

"To effectively utilise disaster resilience funding the following workflow is recommended for a specific region:

·         Identify and prioritise the top two to three natural disaster risks based on the frequency of occurrences.

·         Prioritise specific locations and infrastructure assets which are more prone to disaster risks and design and harden the infrastructure for longer life".

Meanwhile, according to the National Hurricane Centre, Dorian isn't the only event that deserves monitoring given that three other disturbances are emerging in the Atlantic, including post-tropical cyclone Gabrielle, a disturbance off the coast of Africa that can morph into a cyclone within the next 48 hours and a potential cyclone near the Caribbean.