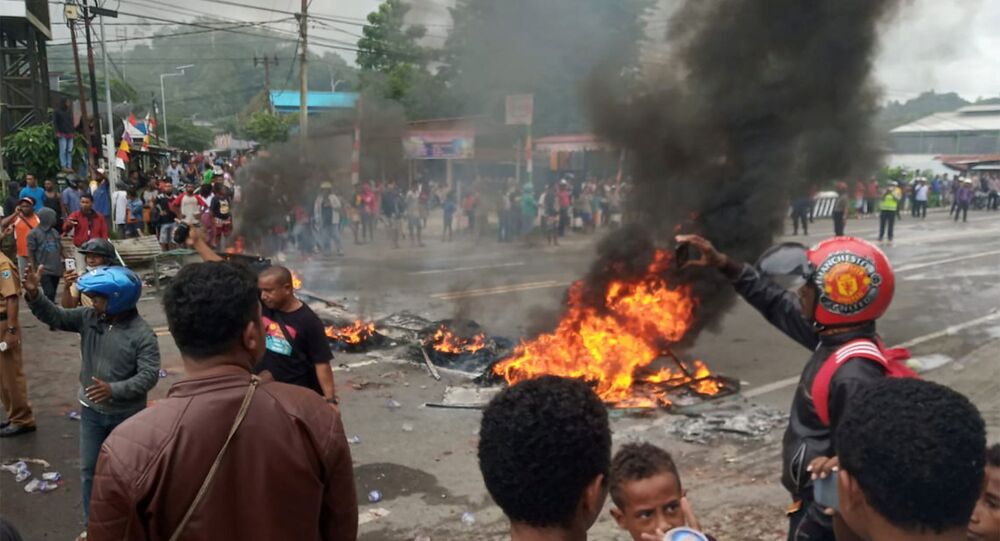 ‘Poor Citizens in Our Own Land’: West Papuan Movement Heats Up Amid Indonesian ‘Colonialism’

Over the past two weeks, demonstrators have gathered in the West Papuan city of Jayapura in Indonesia to protest against discrimination by Indonesian security forces and to demand self-determination and independence.

The world has turned a blind eye to the struggle against racism and discrimination in Indonesia’s easternmost region ever since it joined the country in 1963, Raki Ap, spokesperson for Free West Papua Campaign, told Radio Sputnik’s By Any Means Necessary Friday.

“In the past, colonization [made it so] that the island of New Guinea was split in two. The eastern half is now the independent Papua New Guinea, and the western half was, until 1960, a colony of the Netherlands, like the rest of Indonesia was. Indonesia got its independence [in 1945] … West Papua [didn’t become a] part of it until 1963. The Netherlands handed over the territory known as Dutch New Guinea to Indonesia,” Ap told hosts Eugene Puryear and Sean Blackmon.

​“So, since then, against the will of the West Papuans, West Papua became part of the Indonesia we know today, and since then, West Papua [has been] actually occupied by … colonial power,” he said.

West Papuan students have begun speaking out about racism and discrimination in Indonesia in recent years, according to Ap. In the last couple of weeks, however, several violent protests broke out after videos of Indonesian forces calling Papuan students “monkeys” and “dog” in the East Java city of Surabaya were circulated on the internet. According to the Guardian, at least six protesters and one soldier have been killed in the clashes in West Papua and Papua provinces.

“The emotions we see today lies in colonialism, lies in racism and marginalization of indingeous West Papuans,” Ap explained.

“When West Papua [was] forced to become part of Indonesia, which is clearly ethnically part of the Asian region, that is where the race differences started. West Papuans are not violent people. Even though we [have been] occupied for more than 50 years … you can see the West Papuans became a minority in their own land,” he added, saying that the racism caught on camera in Surabaya “is a systematic problem by this colonial power in Indonesia.”

Chairman of the United Liberation Movement for West Papua Benny Wenda recently declared that “the time has come for us to reclaim our country,” the Guardian reported. He also revealed that the Indonesian government has cut off internet access in the region to “accelerate the process of restoring security and order in Papua and its surrounding areas.” Some utility companies have even turned off the power in certain areas.

“Indonesian security forces [have gotten] away with killing more than 500,000 indigenous West Papuans [under colonization]. Why is it that the world does not act? Why is it the US government [is] looking away, just benefiting from the world’s biggest gold mine? It’s all about economic benefits … Indonesia is a new colonizer, and they are extracting our resources. We’ve got the world’s biggest goldmine, third largest copper mine. We’ve got gas. We’ve got all kinds of resources, and still, we are poor citizens in our own land,” Ap explained.

According to the Unrepresented Nations & Peoples Organization, West Papua has many natural resources including gold, silver, natural gas, copper and timber, which are being exploited by the Indonesian government.

“The only thing we want is the international community, including the US, the UK, the European Union, to speak out about what is happening and tell Indonesia what they are doing there,” Ap said, noting the government was “denying West Papuans the fundamental right of access to information, access to internet communication ... The world doesn't know what is happening there.”

Moon Colonization: Why Do We Want It and What Technologies Do We Have?

'EU Designed on Principle of Colonization of Central and Eastern Europe'