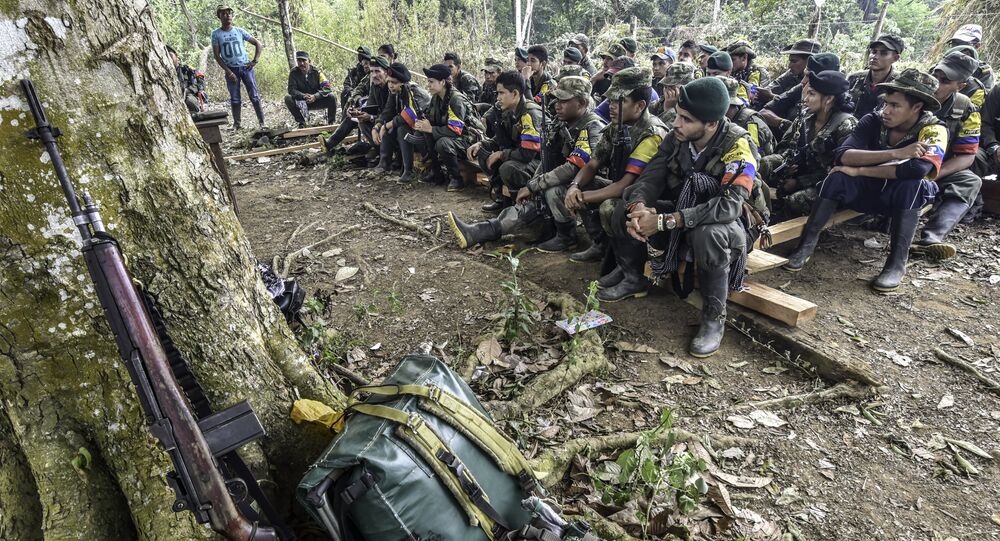 On Thursday, the former top commander of the Revolutionary Armed Forces of Colombia (FARC), Ivan Marquez, announced the 2016 peace deal with Bogota had not been honored, and a return to armed struggle was underway. The government never intended to honor the deal, an activist told Sputnik Friday, and Washington has been working hard to undermine it.

"This is the continuation of the rebel fight in answer to the betrayal of the Havana peace accords by the state. We were never beaten or defeated ideologically, so the struggle continues," former FARC leader Ivan Marquez said in a Thursday video, referring to the 2016 peace deal he helped hammer out. The agreement ended 52 years of armed struggle between the communist militia and the Colombian government and its allied right-wing militias that killed an estimated 260,000 people, as tens of thousands of guerrillas laid down their arms and began the process of reincorporation into civilian life.

However, Marquez says the peace never really happened. About 150 former FARC members have been killed since the agreement was made, along with 627 local activists, according to local watchdog Indepaz.

In response to the declaration, Colombian President Ivan Duque put a 3 billion peso price on the head of every militant who appeared in the video and ordered an attack in the southern San Vicente del Caguán region that reportedly killed nine FARC members, including one of their leaders, Thursday evening.

“There was always a segment of the FARC-EP - the Revolutionary Forces of Colombia People’s Army - that did not agree with laying down their arms,” James Jordan, national coordinator for the Alliance for Global Justice, told Radio Sputnik’s By Any Means Necessary Friday, noting it was “something like a thousand or more” FARC-EP soldiers who dissented.

“During the subsequent years since 2016,” he said, “with so much killing, so much displacement going on, many of the former soldiers who were participating in the peace process had returned to the hills. And even before Marquez made his announcement - the number I had heard was that there were something like 3,000 people still in the hills and still armed. And when one combines that 3,000 with something like 5,000 guerrillas from the ELN - the National Liberation Army - we’re talking about at least 8,000 armed guerrillas still in the hills.”

“And this, of course, is predicated on the … willful noncompliance of the government with the agreements that itself signed to the peace accord. There’s been, since the implementing of the peace accord … 650, 700 human rights defenders, social movement leaders and ex-insurgents and their families, have been killed,” he said, noting that upwards of 40,000 people are still being displaced by the violence.

“So the peace accords have never been fully implemented, and this just represents one reaction to what has been a failure of the peace up to this point in Colombia. I wouldn’t say the peace is dead, but it is seriously, seriously threatened,” he told host Eugene Puryear.

“It has to be looked at in terms of a regional context, too. Of course, Duque does not act alone - you mentioned his mentor, [former Colombian President] Alvaro Uribe, the father of the current death squad movement - but I’d also say that he is mentored and he is pushed on very much by the administration of [US President] Donald Trump, which has launched its own frontal assault against the peace process in Colombia.”

“A lot of people don’t know about that here, but it’s been steady,” Jordan noted. “Even before Duque was elected, President Trump met with Uribe and former President [Andrés] Pastrana in Mar-a-Lago in what I believe was probably a strategy session just to foment what is happening in Colombia right now. President Trump has pushed attacks on the agreement that had to do with crop substitution for coca growers and rural development, so they can develop alternative crops and markets. President Trump has led an assault against the accords that had to do with amnesty and reincorporation of guerrillas into civilian life.”

According to a February report by the US Congressional Research Service, the Pentagon budgeted $391.3 million in military aid to Bogota for 2019, the highest amount since 2011.

“So, Duque is very much emboldened by Uribe and by Trump, and he is also emboldened by the rise of the right-wing leaders like [Jair] Bolsonaro in Brazil, [Mauricio] Macri in Argentina,” Jordan pointed out. “And of course, all this relates to Venezuela ... Colombia is being used as a base to threaten Venezuela and popular movements throughout Latin America. So this is not just a Colombia concern; it’s a concern for everybody who lives in the Americas and the world.”

Jordan noted that the common slander against leftist leaders in Latin America - that they’re narco-traffickers - is an “exercise in hypocrisy,” since according to Bogota’s own data, the FARC has only been involved in roughly 5% of drug trafficking in the country, most of which comes from the economic reality that poor farmers in the region face. “The FARC leaders are not living high off the hog like bigtime narco-traffickers, they’re out hiding in the jungle, you know, living under austere conditions, and anybody that has really studied the issue knows that their main connection with narco-trafficking has been to tax the narco-traffickers,” he said, noting that the last year’s 13% spike in cocaine production has coincided with Trump and Duque’s attacks on the accords.

“The hypocrisy is just total, because we have to remember that Alvaro Uribe was once listed on the US Defense Intelligence Agency’s list of top 100 narco-traffickers in Colombia,” he noted.