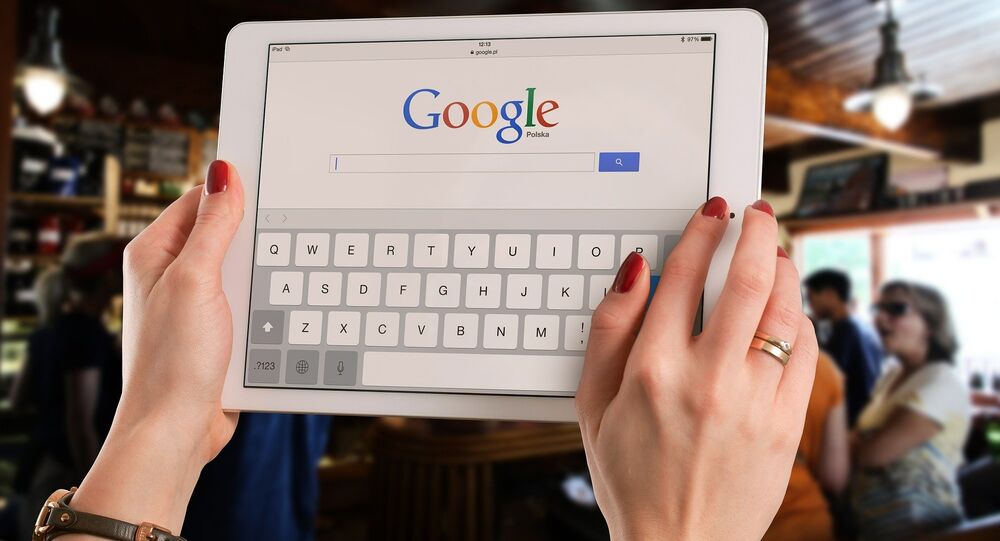 When US President Donald Trump cited a report on Google’s election manipulation last week, Hillary Clinton and the mainstream media attacked both the study and its author as inaccurate. However, the author told Sputnik not only is his research “rock solid,” its damning indictment of Google includes Clinton and the Democrats, too.

“I have concerns about three big areas: one is surveillance, the second is censorship, and the third, which is the one I focus on in my research, is manipulation,” Dr. Robert Epstein, senior research psychologist at the American Institute for Behavioral Research and Technology, told Radio Sputnik’s Fault Lines Thursday. His findings were cited in August 19 tweets by both Clinton and Trump in their continuing spat over the results of the 2016 election, when they found themselves at odds over who would become the 45th US president.

“Both of those assertions are completely false; my work is rock solid,” he told Sputnik, referring to Clinton’s claim that his work was debunked and had relied on a tiny data selection. “It adheres to the very highest standards of scientific research; it always has.”

“We have this false impression that Google provides a bunch of free services and that that’s all Google is,” he said. “They’re not free services! Those services are all just … gussied-up surveillance platforms. And then they take the information and they sell it to advertisers, and that has produced almost 90% of their revenue for almost 20 years. They’re an advertising company.”

Epstein first sought to dispel the idea that he had it out for either Clinton or Google.

“I’ve been a supporter of the Clintons, period, for decades,” he clarified to hosts Garland Nixon and Lee Stranahan, also noting, “I admire Google. They’re an amazing, amazing company.”

Remarking about his research into the impact of search result placement on the opinions of the information-seekers, Epstein said, “I’ve learned not just about search results but about all kinds of new ways in which these big tech platforms, particularly Google, can shift opinions about anything, can shift millions of votes, without anyone knowing they’re being influenced and without leaving a paper trail for authorities to trace.”

“My first big, big report, on what I call SEME - Search Engine Manipulation Effect - the power that search results have to shift opinions and votes massively around the world, that report was published in the Proceedings of the National Academy of Sciences,” he said, noting it was ranked in the top 1% of the academy’s papers.

Epstein said Clinton got the assertion that his study had been debunked and that it relied on 21 people, instead of tens of thousands, “from Google,” noting that she obviously didn’t look into his research.

“I kinda get it: she has a very cozy relationship with Google. I could talk for an hour about just that issue: I mean, her number 1 donor in 2016 was Google; her chief technology officer, Stephanie Hannon, was a former Google executive; the head of Google, Eric Schmidt, offered to run her tech campaign in writing,” Epstein said. “And he set up a secretive tech company called ‘The Groundwork,’ that he ran and he financed, as the head of Google, the sole purpose of which was to put Hillary Clinton into office.”

However, Clinton’s criticisms of Epstein soon grabbed the attention of the mainstream media, and through a mix of ‘telephone game’ and dramatic amplification soon reached absurd proportions. “I mean, everywhere, I’ve been slaughtered, I’ve been crucified,” he said.

“My research has opened up a Pandora’s Box, because my research shows that if the platform itself - Google - if the platform itself wants to favor one music service or one comparative shopping service or one candidate or one party, guess what? There’s no way you can counteract that. And it turns out that those search rankings are so powerful in shifting opinions that they can easily flip elections,” he said.

A recent Google casualty might be anti-monopolist presidential candidate Rep. Tulsi Gabbard (D-HI), who has opened a $50 million lawsuit alleging that Google arbitrarily suspended her presidential campaign’s advertising account during a key fundraising period following the first Democratic debate in late June, when she was the most-searched among all candidates in the debate. Now that she has failed to qualify for the third debate, for which one of the key requirements was meeting certain fundraising goals, the damage done to the candidate by Google’s suspension is palpable.

Epstein admitted that Google’s “ephemeral” search results, uniquely generated for each person, were impossible to track - at first. That made it hard to prove in practice that such a biased influence exists. “In 2016, I built the first-ever system for monitoring search results, and I captured 13,207 election-related searches - not just on Google, [but on] Google, Bing and Yahoo - and the 98,000 web pages to which the search results linked, analyzed the data, found tremendous pro-Hillary Clinton bias on Google, but not on Bing or Yahoo.”

“I believe in democracy and our country and the free and fair election more than I believe in any particular candidate or party, period,” Epstein told Sputnik, noting he’d said the same in his testimony before Congress earlier this month. “So I am reporting what I have found, and it’s very disturbing, and it’s a serious threat to the free and fair election, to democracy, to human autonomy … I’m just speaking the truth about what I have found, and what I have found is rock solid and extremely, extremely frightening.”

“And it’s affected not just the United States: Google, and to a lesser extent Facebook, are impacting the opinions, attitudes, purchases, beliefs, votes, of more than 2-and-a-half billion people in virtually every country in the world,” he said. “That number will soon be over 4 billion people.”

'No Logic, Just Ideology': Right-Wing Media Explain How They Ended Up on Google's New Blacklist